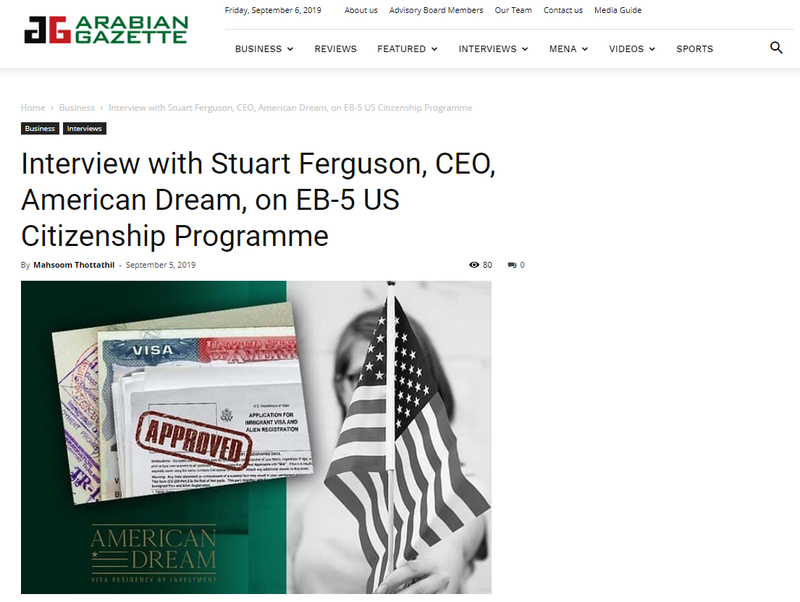 About the EB-5 Visa

EB-5 was created in 1990 to stimulate the U.S. economy through job creation and capital investment, allowing foreign investors to become permanent residents and green cardholders. If the EB-5 investment project is located within a designated Targeted Employment Area (TEA) the investment is currently $500,000 but new changes to the programme mean that the amount will increase later this year to $900,000.

What are the benefits of US citizenship by investment compared to other programmes e.g. Europe and the Caribbean?

The United States is considered the most popular second citizenship destination worldwide. US citizenship through the EB-5 investor programme offers all the same benefits as other programmes, e.g. freedom of movement, convenient travel, financial incentives, and personal security, plus the ability to live and work in the US that comes with a Green Card. There is no sponsor required, no special language, education or business experience requirements, and no restriction of movement.

Not all of the other options grant immediate residency, some don’t give a second passport, and there are various limitations imposed on what an applicant can invest in.

What are some of the reasons for the increase in interest in EB-5 programme from the Middle East?

The Middle East has always been an important market for second citizenship providers for many reasons.

Countries such as the UAE, that attract a lot of expats, are home to many nationalities who choose the EB-5 programme from other source markets and have the capital to afford it. For example, data from the United Nations shows the majority of international immigrants in the UAE (40%) are originally from India, one of the world’s fastest-growing EB-5 investor markets. Indian immigrants in the UAE are followed by those from Pakistan, Egypt, Philippines, and Indonesia – countries that also registered significant investment in EB-5 over the previous year.

Many Gulf citizens find the prospect of becoming a “global citizen” very attractive, perhaps they face obstacles trying to travel with their native passport, they may worry about political instability and entrepreneurs/business people could be looking to expand their business influence on a broader international scale.

As awareness of the benefits of EB-5 grows, we are seeing a big rise in applications, plus, other avenues for living and working in the US are facing increasing restrictions as a result of the immigration policies tightening up.

How does EB-5 fare as an investment opportunity and what kind of returns can an investor expect, if any?

Primarily, EB-5 investments are a means to an end (i.e. securing citizenship/a Green Card) and, typically, the investor’s capital is returned to them. Investors are usually not exposed to any real risk and, therefore, have no expectation in respect of investment returns. At American Dream, our offerings generate an annual return of 0.5% on the unreturned capital.

Can you tell us more about the two options available for an EB-5 investment?

Interested parties have two ways of pursuing visa residency by investment in the US; either by investing through a Regional Center or direct investment. An EB-5 Regional Center is an organization that has been approved by United States Citizenship and Immigration Services (USCIS) to sponsor capital investment projects for investment by EB-5 investors. They act as a service agent and this approach is usually recommended for people who don’t wish to manage their investment directly. Providing it is part of a targeted employment area (TEA), Regional Center investment is currently set at $500,000 and they are responsible for the job creation and investment success. Whereas direct investment requires $1 million dollars and the investor is responsible for job creation and the investment themselves. The Regional Center model is more straight-forward but it is still advisable to consult a law firm that specializes in immigration for the most reliable and up-to-date information.

What changes are being made to the EB-5 visa programme?

Changes to the programme have been in the pipeline for some time and new regulations were discussed during the end of Obama’s administration. The final changes have now been approved and as of 21st November 2019, the minimum investment amount will increase from $500,000 to $900,000. What’s more, the current TEAs are being re-assessed to make sure that investments are going to help the areas most in need of development. If a project falls outside one of the newly classified TEAs, the investment amount will be $1.8 million.
This means that anyone applying after 21 November will be subject to the new rules. Investors need to be subscribed (invested) and have their application filed with immigration before this date to qualify under the current legislation.

How do you see new competition, now that Gulf countries have also joined the “Green Card” bandwagon to attract investment and talent?

We have recently seen the UAE and KSA announce plans for what is being dubbed as Green Card-style or ‘golden card-style’ residency programme. However, from what we know at the moment, these represent quite a different offering to something like EB-5. They mainly seem to be aimed at making it more flexible for certain existing, long-term expats, who are residents and investors in these countries, to do business there, and we are still awaiting more details about the specifics. With regards to EB-5, we still expect increasing interest from Gulf citizens who have the desire for a second passport and the ability to travel freely, whilst living and doing business in other parts of the world, such as the US.