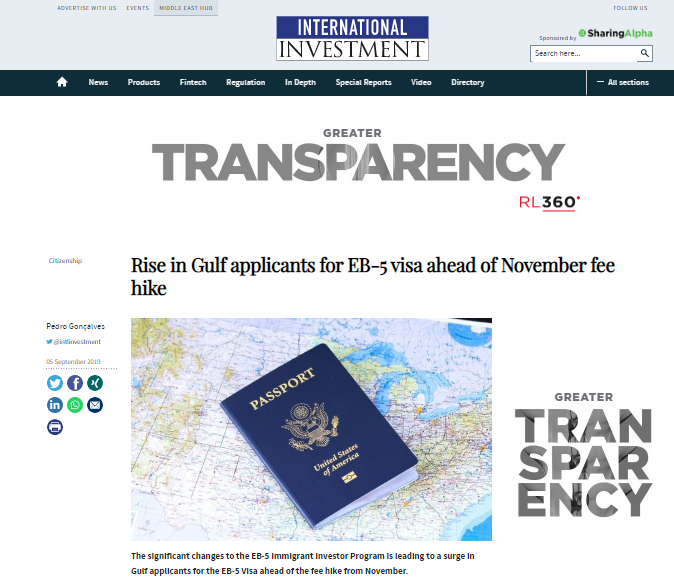 The Trump administration recently announced changes to the EB-5 visa program including a rise in the standard minimum investment from $1m to $1.8m.

The EB-5 visa for Immigrant Investors was created by the US Immigration Act of 1990 as a way of encouraging foreign investment in projects across the United States.

For Targeted Employment Areas (TEA) where unemployment is high, minimum investment requirement has been raised to $900.000 from $500.000 owing to a 50% difference in investment amount between TEAs and non-TEAs. The new rules will be effective from 21st November, 2019. The final rule will also state that the investment amounts will ‘automatically adjust to inflation every five years.'

This is the first time since 1993 that the rules have been altered significantly. The hike in the investment requirements effective November has caused an upsurge in Gulf residents applying to take part in an American scheme offering the chance to earn citizenship.

"I have seen almost more than 100% surge in applications as it has been out there now for nearly a month," Preeya Malik, managing director of Step America, a Dubai-based firm which offers the EB-5 visa scheme, told Arabian Business.

"People are getting to know about it and it is the first time since 2015 they have written a price increase into legislation. If we were getting five applications every week, now we are getting five people almost every other day. People who have been sitting on the fence, this has been the deciding factor to move forward," she added.

There are four general steps that investors must complete to become US permanent residents through the EB-5 visa programme.

The process involves first finding a suitable business project to invest in and ensuring that it meets the investor requirements.

Applicants must then invest the required capital in that project.

An immigration attorney then provides proof of this investment by filing an I-526 petition with USCIS, which then typically informs applicants whether their I-526 petition has been accepted after 12 to 18 months. Most regional centres will refund your investment if your I-526 is denied.

The third step of the EB-5 application process is for applicants to become two-year conditional residents of the US so they can implement the project funded by their EB-5 investment. EB-5 investors are eligible to become US residents once their I-526 petition has been approved by USCIS.

The final step in the EB-5 visa process is for applicants to become unconditional permanent residents by removing their two-year conditional status.