U.S. Senator Seeks To Halt EB-5 Regulation Before It Goes Into Effect 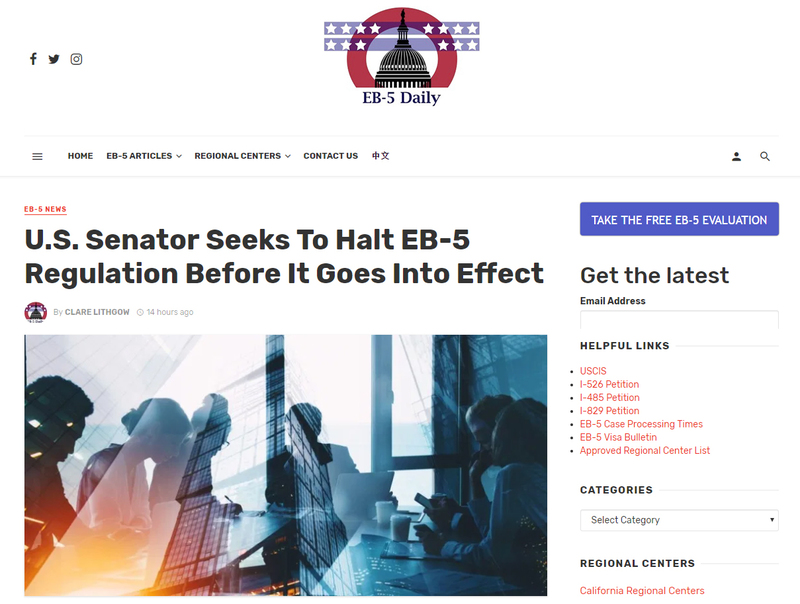 Senator Rand Paul (R-Kentucky) is looking for other senators to support a joint resolution that would overturn the EB-5 Immigrant Investor Program Modernization rule set to go into effect on November 21st.

Sen. Paul will use the Congressional Review Act, which will give him a 60-day window to gain the support of 30 senators through a written petition to stop the rule from going into effect. From there, to pass, the joint resolution would need a simple majority in Congress as well as the President’s signature.

If the new rule were to go into effect, Sen. Paul said, “…this rule may undermine the very purpose of the program, which is to create jobs and grow the economy.” This is because the raising of the minimum investment amount could soon make many foreign investors ineligible for the program.

While keeping the minimum investment amount the same and maintaining states’ ability to decide targeted employment areas is helpful, the real issue that Congress should address is the EB-5 visa cap. Right now, only about 3,000 of the 10,000 visas are issued to EB-5 investors each fiscal year. The rest are issued to the EB-5 investor’s immediate family members. It can be argued that when the EB-5 Program was first created the creators intended to only count the principal EB-5 investors toward the visa cap.

If Congress only counted EB-5 investors toward the visa cap, three things could happen.

1. It would help the visa backlog that currently affects Mainland China, Vietnam, and India

2. It would mean roughly 7,000 more EB-5 investors are contributing to the U.S. economy adding billions of dollars in investment capital and creating tens of thousands of jobs for U.S. workers

3. It would prevent the number of EB-5 visas issued each FY from shrinking further. In the past, the average amount of visas each investor received was about 3.3 (a spouse and one child). This was because most of the investors were from Mainland China where the one-child policy was in place. Now that Mainland China is facing retrogression, investors from other countries, where they are allowed to have more children, may take up more visas from the 10,000 visa cap.

At the very least, to avoid the much higher minimum investment amounts that are set to go into place in November, apply for the EB-5 Program now and get grandfathered in under current rules.