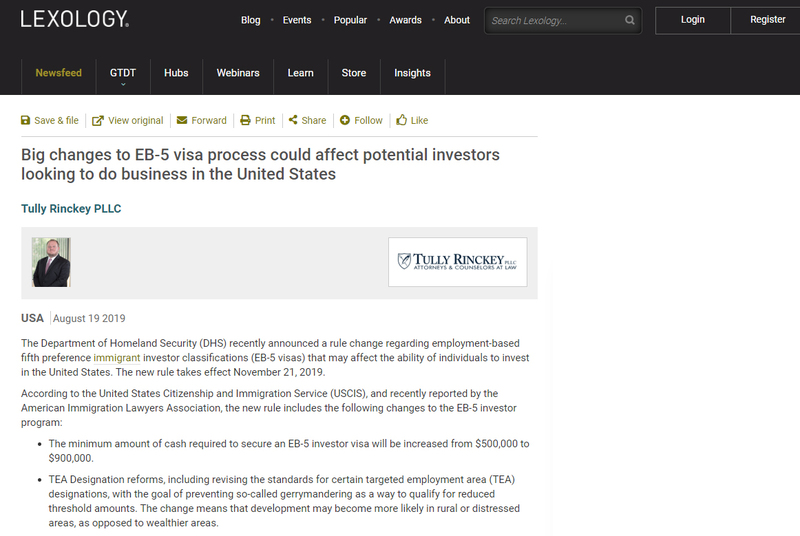 The Department of Homeland Security (DHS) recently announced a rule change regarding employment-based fifth preference immigrant investor classifications (EB-5 visas) that may affect the ability of individuals to invest in the United States. The new rule takes effect on November 21, 2019.

According to the United States Citizenship and Immigration Service (USCIS), and recently reported by the American Immigration Lawyers Association, the new rule includes the following changes to the EB-5 investor program:

In 2018, investors from Mainland China made up the largest group utilizing EB-5 visas, with just more than 48 percent, followed by those from Vietnam (7 percent), India (6 percent) and South Korea (5.5 percent), according to eb5daily.com. However, in 2018, the number of visas issued to individuals in Mainland China decreased by 3,000, while individuals in countries such as India, South Korea, China (Tawain-born), Venezuela, Hong Kong S.A.R. Mexico and Pakistan were issued more than double the number of visas than the previous year, according to eb5daily.

Many have advocated that foreign investors seeking EB-5 visas take swift action well before the November 21 deadline when the rule changes, however, it is important that petitions be thoroughly completed and contain all of the required documentation to avoid rejection by the USCIS. Therefore, it is advisable to engage a knowledgeable immigration attorney in the process of seeking EB-5 visas.