Visa, Revised: Why EB-5 Is Getting Pricier and Harder to Use in Big Cities 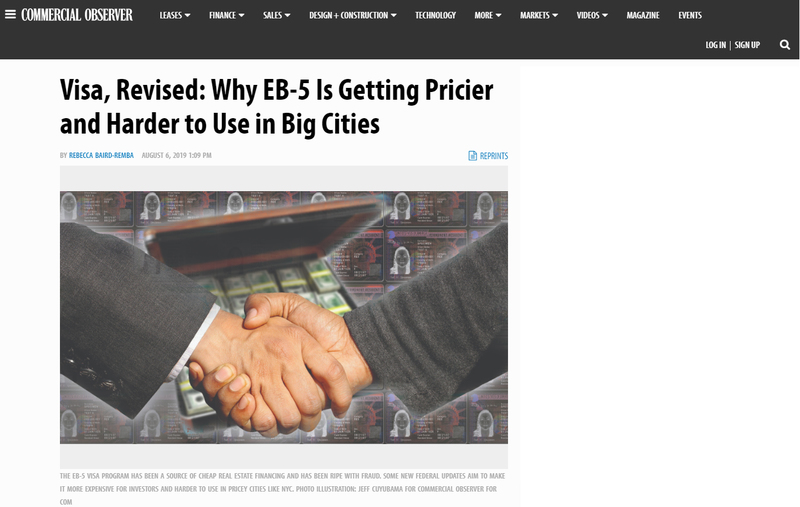 In the wake of the Great Recession, the EB-5 program — often referred to as “cash for visas” — became an easy source of financing for real estate developers who found themselves unable to borrow money from traditional lenders. But new rules released by the federal government last month may make it much harder for real estate firms and other kinds of companies to use EB-5 money, especially in expensive cities like New York.

Created by Congress in 1990, EB-5 encourages visa-seekers to invest in businesses and real estate projects in high-unemployment areas. The barrier to entry is high. At its lower tier, investors previously had to kick in at least $500,000 to a qualifying development in order to get a green card. Under the new regulations, the minimum investment has risen to $900,000. But in prosperous areas like New York City, EB-5 applicants will now have to put up at least $1.8 million — a huge increase from the previous upper tier minimum of $1 million. Real estate watchers anticipate that making EB-5 more expensive will reduce the number of people who apply and, by extension, make it harder to raise financing for large developments using the program.

“Investors at the $1.8 million level are going to be few and far between,” said Allison Berman, the managing director and general counsel of Greystone’s EB-5 division. “Projects that are done in Los Angeles, downtown Seattle, Manhattan — those projects are going to have to compete for few investors at the $1.8 million level. The difficulty of finding the capital is going to make EB-5 much less attractive to those developers.”

A major developer who has relied on EB-5 financing in the past explained the impact of the updates in even starker terms. “There are a number of developers around whose whole business model relies on EB-5,” said the developer, who declined to be named in connection with the program. “People like that are going to be basically out of business.”

The Real Estate Board of New York had a similar prediction. “New changes to the [EB-5] program will slow important economic development projects across the city by making it more difficult to secure this financing, raising serious questions about the program’s viability moving forward,” said newly installed REBNY president James Whelan.

The outlook for EB-5 is already a little grim. The number of EB-5 visa applications declined significantly last year, dropping 50 percent from 2017 to 2018, The Wall Street Journal reported in June. Chinese investors, who made up the vast majority of EB-5 applicants for the past decade, have largely retreated from the program because there is now a 16-year wait time for Chinese nationals to get an EB-5 visa. A recent uptick in applications from countries like India and Vietnam has limited the number of visas that the U.S. can approve from China. (The U.S. Citizenship and Immigration Service, which administers the program, only issues 10,000 EB-5 visas a year, and, with the higher demand, each country is limited to 700 visas annually.)

Investors from China were often willing to accept lower returns in order to get green cards. Newer investors from other countries are driving harder bargains and demanding better returns on investments, meaning that EB-5 financing is getting more expensive in general, according to sources familiar with the program.

“The China market is dead,” said Michael Gibson of US Advisors, who helps vet EB-5 projects for investors. “Vietnam has been capped out for a while. People are scrambling. They’re going to Nigeria — maybe you’re going to get five investors there. The sourcing of investors has become much more difficult.”

The law also allows developers to string together a series of adjacent census tracts in order to meet the EB-5 requirement that a project be located in a “targeted employment area,” where the average unemployment rate was at least 150 percent of the national unemployment rate. States would then certify these amalgamations of census tracts as TEAs, allowing owners to move forward with raising EB-5 cash. Related Companies famously met the high-unemployment threshold by including an uninhabited stretch of the Hudson River as part of its TEA for Hudson Yards, one of the largest and most expensive mixed-use developments in the country.

If an enterprise or development is located in a high-unemployment area, EB-5 applicants can invest at the lower $900,000 threshold. The lower amount also applies for projects located in rurals town with 20,000 residents or less. But if a project isn’t in a TEA or a rural area, investors looking for visas now have to put up double that amount.

In an effort to prevent the gerrymandering of census tracts that occurred with developments like Hudson Yards, the U.S. Citizenship and Immigration Services, rather than state governments, will now be in charge of certifying targeted unemployment areas for EB-5 projects.

That will likely mean slower processing times for entrepreneurs hoping to raise money through the program, said Berman of Greystone, who noted that USCIS takes 24 months to process an EB-5 project application. States were able to certify them in a few weeks. And the stricter rules and higher amounts will dramatically limit where EB-5 projects can be located and how many people will be able to invest.

“A lot fewer projects are going to qualify as TEAs,” Berman explained. “Ninety-eight percent of the projects are in TEAs, but going forward I don’t think that’s going to be the case anymore.”

However, the new changes don’t address the EB-5’s biggest problem: fraud. There have been dozens of examples of EB-5 fraud across the country in recent years; the most expensive episode involved the owners of a Vermont ski resort, called Jay Peak, defrauding foreign investors of $200 million in what the SEC called a “ponzi-like scheme.” The former owner and president of Jay Peak, along with their two business partners, were indicted on federal fraud charges in May for allegedly siphoning off millions of dollars that EB-5 investors had contributed for a proposed biomedical research park outside the resort. Instead of building the biotech facility and creating the jobs required by the EB-5 program, the four men used the money to cover funding shortfalls for new construction at the ski resort, according to a federal indictment.

And there are plenty of projects that take in EB-5 financing and simply fail to materialize, either because of mismanagement or a lack of funding. On Staten Island, 412 foreign investors have pumped $206 million into the construction of a massive Ferris wheel known as the New York Wheel. The developers of the wheel withdrew last year amid lawsuits over the construction and a struggle to find more financing, but the New York City Economic Development Corporation, which owns the site, remains on the hook.

A lack of information can also make it hard for foreign investors to choose trustworthy regional centers, which help connect investors with projects seeking financing. Regional centers often fail to disclose their prior work with developments that have either failed or defrauded investors, said Gibson.

“The biggest problem our program faces is one of transparency,” Gibson explained. “Try to find out any information on a regional center, and you can’t. There’s no accountability or oversight and no information on who they approve and who they deny. It’s unacceptable.”

For years, Senators Chuck Grassley of Iowa and Patrick Leahy of Vermont have pushed for measures that would require regional centers to disclose more data, allow the Department of Homeland Security to terminate centers that engage in fraud, and mandate background checks for people involved with regional centers and regular audits of projects. But the legislation has stalled repeatedly since it was first introduced in 2015.

“Someone might ask, how effective has the program been since its inception?” Gibson said. “You’d need to know how many projects have been financed using EB-5, how many jobs have been created, how much capital has been raised. [The government] doesn’t release that data.”