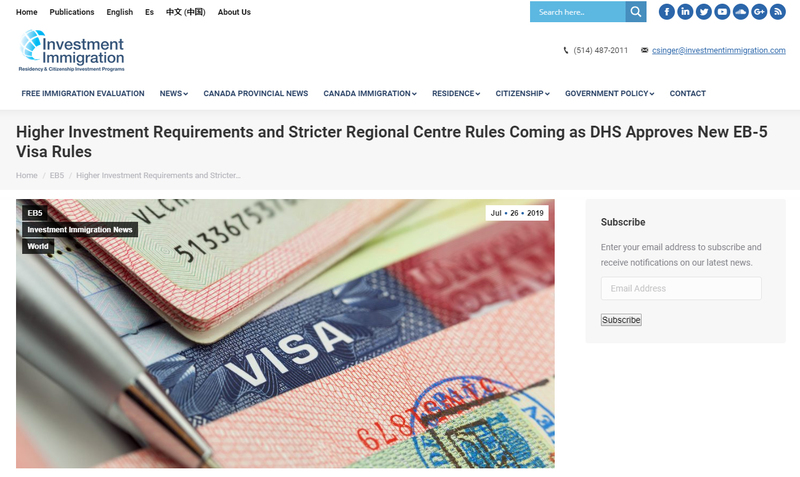 The Department of Homeland Security (DHS) has published the final rules modifying the US EB-5 visa program.

The initial Notice of Proposed Rule making (NPRM) was first published in the Federal Register on January 13, 2017.

The changes will take effect from November 21, 2019, and will see the most important changes to the EB-5 visa program in nearly 30 years.  These changes include an increase in minimum investment, centralized designation of Targeted Employment Areas (TEA), and retention of earliest priority date for an EB-5 applicant compelled to file multiple I-526 petitions.

Changes to the Investment Requirement

Changes to Targeted Employment AreasFurther, the new rules provide for regular five-year review of the minimum investment limits for adjustment for inflation. Going ahead, investors may face increased investment requirements, when five-year inflation rates are factored.

Changes related to Targeted Employment Areas under the EB-5 program include:• States shall no longer have the authority to designate TEAs. The DHS will be the sole designating authority for TEAs. • Centralization of designation of TEAs means the various state-specific parameters and benchmarks shall be replaced by a uniform national parameter. • Cities and towns with a population in excess of 20,000 can be designated as a high-unemployment area only if located outside a Metropolitan Statistical Area(MSA). This is a significant change which means TEA projects cannot be setup in upscale localities of big cities through gerrymandering.• Only census tract(s) directly adjacent to the tract(s) in which the New Commercial Enterprise is operational can be considered for the purpose of designation of TEAs. Again, this change is aimed at restricting the practice of gerrymandering.

As per existing rules, an investor compelled to file a new petition post approval of his/her I-526 petition does not retain the priority date and faces a significantly longer waiting period for a green card.

As per the new rule, an investor will retain the priority date except when revocation of approval takes place due to investor’s fraud or willful representation or due to a material error by the investor.

However, this entitlement does not extend to investors who have entered the US as a conditional permanent resident.

Impact of the Changes• A likely surge in EB-5 filings until November 21st 2019, as investors scramble to qualify under the existing lower investment limit. • Increase in backlog and consequent increase in adjudication and processing time for EB-5 investors filing after the new rules come into effect on November 21.• A likely fall in filings in Fiscal Year 2020 as the higher investment requirement comes into force.• Increase in number of rural EB-5 projects since investors no longer have the option of investing in TEA projects in urban areas located in an MSA.• Increased risk for investors who will have to identify viable projects that will fulfill all operational and job-creation requirements till the end of the period of conditional permanent residence in the US. • Increased investor interest in the Quebec Immigrant Investor Program, which offers a simpler and less risky route to permanent residence in a developed country.

With the possibility of further changes and reforms by lawmakers, EB-5 investors will face an uncertain future ahead, even following November 21, 2019.