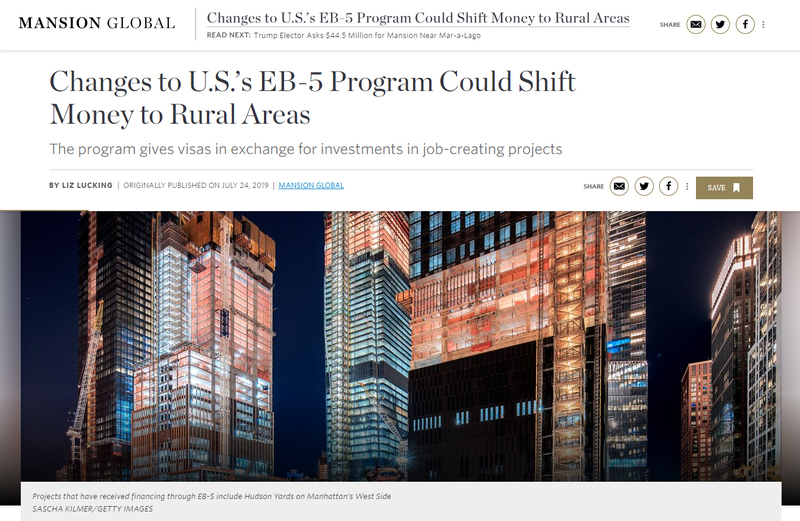 The next four months could be hectic for developers and foreign investors in the U.S. as they rush to beat the newly announced changes coming to the EB-5 immigration visa program in November.

The Department of Homeland Security published a final rule Wednesday, making changes to the EB-5 program that finances a number of high-end condo developments. The changes will likely result in some developments moving from wealthy hubs into more rural and distressed areas, according to experts.

Wednesday’s rule upped the threshold for EB-5 investments and adjusted how "target employment areas," or TEAs, are determined, to prevent foreign money being invested in already affluent areas rather than in places that need a financial boost.

States will no longer be able to designate certain geographic and political subdivisions as high unemployment areas, instead, the Department of Homeland Security will make designations directly.

“There will absolutely be a rush to get in before the effective date,” according to Reaz Jafri, head of the immigration practice of London-based international law firm Withers.

The visa program, introduced in 1990, previously offered two-year conditional green cards to wealthy foreigners in exchange for an investment of at least $1 million in a job-creating project, or $500,000 for projects located in areas where there is high unemployment. The program reportedly generates more than $5 billion a year from 10,000 visas.

Those investments have largely gone to construction projects in dense urban areas and have underpinned financing for many major luxury residential towers, Mansion Global previously reported.

“Typically, most foreign investors find major urban areas as opposed to rural areas more attractive as they believe the quality of the projects are stronger, the developers are more experienced and the chance of recovering their investment is greater,” Roger Bernstein, vice-chair of immigration and foreign investments at Philadelphia-based law firm Saul Ewing Arnstein & Lehr, told Mansion Global.

He noted that a 2015 Government Accountability Office study found that only 3% of EB-5 investment went into rural areas as opposed to high unemployment areas in urban centers.

But the result of the changes, which will be implemented Nov. 21, will be substantially fewer qualified EB-5 projects in large investment hubs like Manhattan, he said.

“The intent of [U.S. Citizenship and Immigration Services] is to make more attractive investments in genuinely high unemployment areas and rural areas,” Mr. Bernstein said. “The final rule, to a certain extent, accomplishes that goal. I expect next year—barring any new legislation—you will see ... more interest in rural areas.”

These higher investment amounts are likely to reduce the investor pool “due to the availability of that much more cash by potential investors and the added challenges of exporting those funds from many countries,” said Reid Thomas, executive vice president and general manager of specialty financial administration at California-based financial technology company NES Financial. “However, it will also mean that projects will require fewer investors to raise the same amount of capital.”

Overall, the real estate sector shouldn’t expect to see any major impact, according to Mr. Jafri. “While well-liked by real estate developers as an additional and low-interest financing resource, EB-5 is not critical to the sector,” he said.

“EB-5 investors will continue to invest in regional centers,” he said.” Even if we see a 50% drop in EB-5 activity, it is safe to predict a near-zero impact because net-net about the same amount of funds are raised.”