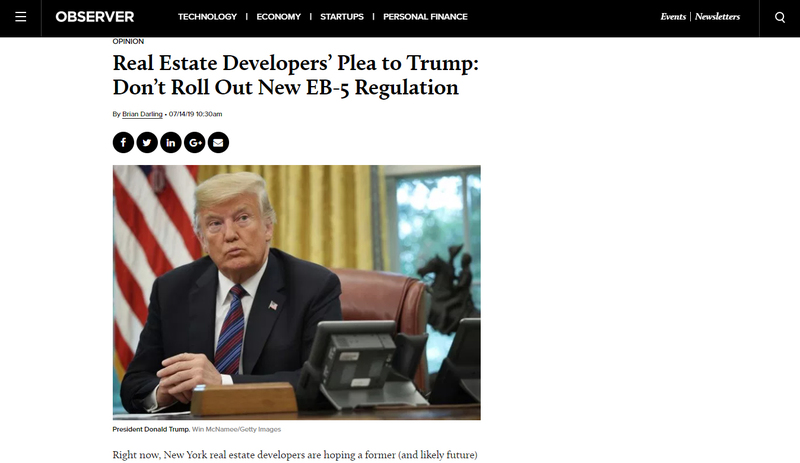 The Trump administration is very close to rolling out a new regulation that will hammer big city real estate projects. The Obama administration left behind a regulatory reform to something called the EB-5 investor visa program that will end up sabotaging foreign investment in U.S. big city infrastructure projects. This idea will not make America great again.

The EB-5 program is a merit-based immigration category that promotes U.S. job creation through foreign direct investment, and the program has been around for decades. The EB-5 Coalition commissioned a report released on March 13, concluding that over a recent two year period “a total of $10.98 billion in capital investment was made through the Regional Center program.” This builds on a study from the American Action Forum released on January 24, 2018 that found “EB-5 immigrants have invested at least $20 billion in the U.S. economy since 2008, with over $5 billion invested in 2017 alone” and “projects associated with EB-5 investments have created over 174,000 jobs, which equates to approximately 16 jobs per investor.” Those numbers prove this program to be the only immigration program in U.S. law that could potentially create hundreds of thousands of American jobs and draw in tens of billions of foreign investments over the next five years. When the president gets wind that middle-level bureaucrats in his own administration are going to hurt growth and put his potential second term in danger, he is going to be very, very angry.

The Obama administration rolled out a last-minute regulation in the waning months of President Barack Obama’s second term intended to put regulations in place making the program unworkable.  They used executive actions to push for relief for Dreamers, yet they wanted to use executive power to also make it harder for foreign investors to come to the United States. These issues should be dealt with by Congress, not the executive branch, through legislation. It is unnerving that the Trump administration would adopt an Obama last-minute regulatory time bomb with a purpose to harm economic growth in the future.

The Obama regulation being pushed out by some in the Trump administration would hike the lowest level investment in big city projects to $1.8 million to be eligible for an EB-5 investor visa. The program right now has a huge backlog and artificially low numbers of eligible investors because family members are included in EB-5 cap numbers. This hike in the amount needed to qualify for an EB-5 investor visa is purposely set at a level that will end big city investment and result in less real estate development projects and fewer big city jobs for American citizens.

There are a few reasons why a progressive idea would be adopted by some in the Trump administration. First, the Obama administration disliked merit-based programs and favored low-skilled chain migration programs. Also, there are forces in the Trump administration who want to lower the numbers of legal immigrants through any means necessary and are willing to cut any existing program that will help lower legal immigration numbers. These interests have allied in a way that will punish a merit-based immigration program that is unique in that it both rewards American job creation and brings in billions in real estate investment in both rural and urban areas.

Acting U.S. Citizenship and Immigration Services (USCIS) director Ken Cuccinelli has promised a tough stance on immigration related issues. Roping the EB-5 program into the meta battle on immigration is a classic case of cutting off your nose to spite your face. Pushing this Obama regulation will hurt economic growth because the EB-5 program is a magnet for billions in foreign investment in U.S. infrastructure projects. Those projects create jobs for Americans. Less American jobs means more angry American voters.

Trump is campaigning on a platform of being a promise-keeper. This regulation, if allowed to go forward, will violate Trump’s promise to convert our legal immigration system from one dominated by non-merit based programs, including the visa lottery and chain migration, to a merit-based system that encourages immigrants to come to the U.S. in a way that benefits American interests.