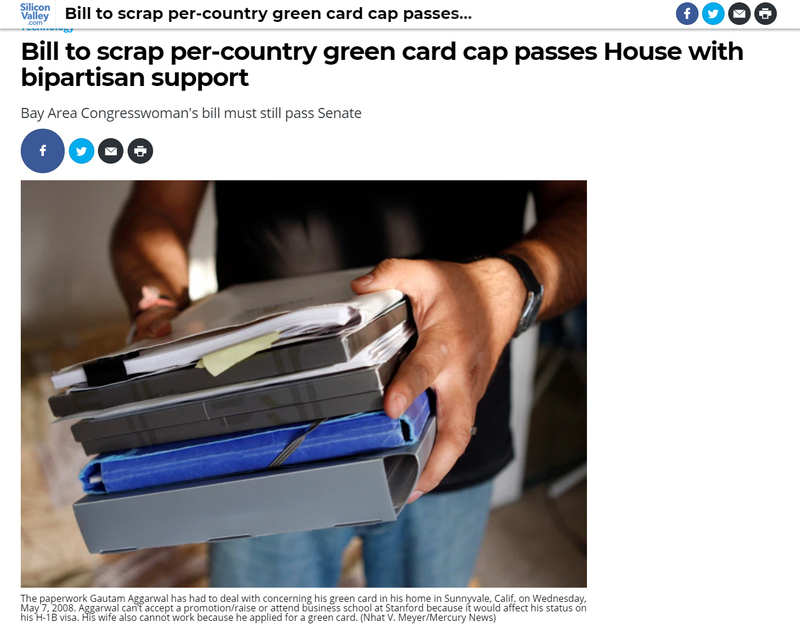 The paperwork Gautam Aggarwal has had to deal with concerning his green card in his home in Sunnyvale, Calif. on Wednesday, May 7, 2008. Aggarwal can’t accept a promotion/raise or attend business school at Stanford because it would affect his status on his H-1B visa. His wife also cannot work because he applied for a green card.

Amid a backlog that sees some applicants waiting decades for green cards, 140 Republican members of Congress joined 224 Democrats and passed a bill Wednesday to end the per-country cap on green cards.

The “Fairness for High-Skilled Immigrants Act,” introduced in February by Congresswoman Zoe Lofgren (D-San Jose), would throw out the annual 7 percent cap on green cards for citizens of any one country. The change would be phased in over three years if the measure passes the Senate and is signed into law by President Donald Trump.

“In order for American industries to remain competitive and create more jobs, they must be able to recruit and retain the best talent in the world,” Lofgren said in a news release Wednesday.

She added in an interview after the vote, “If you’ve got your application approved based on merit, the color of your skin or the place of birth should not be the determinant.”

Citizens of India and China working in the U.S., many of whom are on the H-1B visa intended for highly-skilled workers, face the longest green card waits.

Under Lofgren’s bill, during the first year of implementation, a maximum 85 percent of green cards could be allocated to Indian or Chinese citizens. In the second and third years, that would rise to 90 percent.

David North, a fellow at the Center for Immigration Studies, which lobbies for reduced immigration, said in a blog post that big winners under the bill would be wealthy Chinese on the EB-5 investor visa, along with many Indians on the H-1B visa, plus major tech firms employing large numbers of Indian citizens on the H-1B. American workers, North said, would be among the biggest losers, competing for jobs against foreign nationals.

On one point, Lofgren is in agreement with North, who described H-1B holders as “semi-indentured workers” because their visas are tied to a specific employer.

According to Lofgren, “Workers that are in a temporary status are more vulnerable to exploitation than workers that have status that allows them to negotiate or move to other employers.”

Lofgren estimated that if the bill were to pass, it would take close to a decade for green card waits to equalize among different countries. North said that more immediately, cutting wait times for some foreign citizens would mean longer delays for others, including Canadians and Argentinians.

The bill would also raise the per-country cap for family-sponsored green cards to 15 percent from 7 percent.

Lofgren said she was “cautiously optimistic” the bill would pass the Senate, as senators in support of the bill are working to persuade skeptics. As for whether Trump would sign the bill, Logren noted its unusual backing. “It’s one of these rare things when it comes to immigration where there’s broad bipartisan support,” Lofgren said.

The bill would not increase overall green card numbers. Lofgren supports an increase to the number of green cards, but said there’s not bipartisan backing for that.