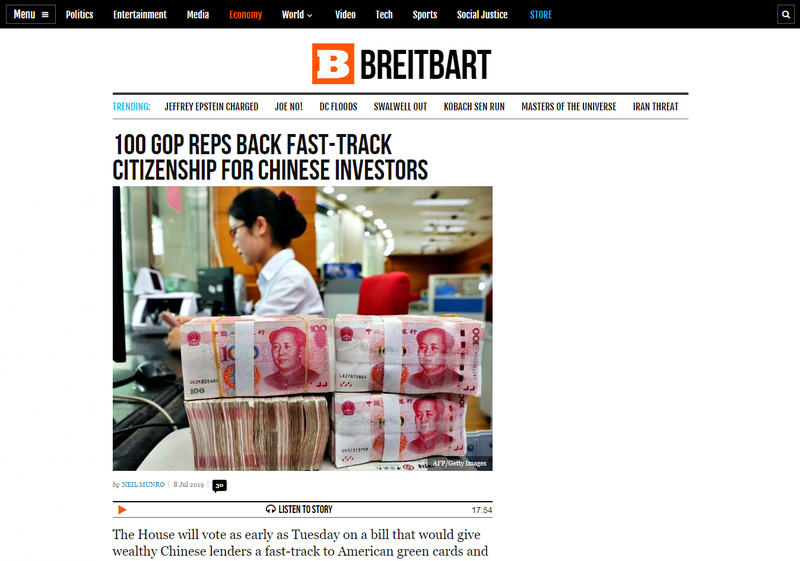 The House will vote as early as Tuesday on a bill that would give wealthy Chinese lenders a fast-track to American green cards and citizenship.

Democratic Rep. Zoe Lofgren’s bill — The Fairness for High Skilled Immigrants Act of 2019 — is co-sponsored by more than 100 GOP legislators, and it helps Chinese lenders by eliminating the pro-diversity rules in the EB-5 “Golden Visa” program.

The EB-5 program awards almost 10,000 green cards each year to foreigners who lend money to U.S. investors. Once the lenders get green cards a few years later, they can get their money back, apply for citizenship, and then import their relatives via the chain-migration rules.

Lofgren is a former immigration lawyer whose district includes much of Silicon Valley. She is trying to get the HR.1044 “country caps” bill passed without hearing or committee votes by sending it through a fast-track process. But that process requires 290 voters for a win, ensuring that the GOP leaders can stop her bill by reducing GOP support below 50 votes.

Led by Colorado Rep. Ken Buck, roughly 108 GOP members are co-sponsoring the HR.1044 outsourcing legislation, despite its likely harmful impact on American college graduates in their home districts. Several websites, including SAITJ.organd h1bhuntinglicenses.com, allow voters and opposition-researchers to track the inflow of H-1B foreign contract-workers into the white-collar jobs sought by constituents in each member’s congressional district.

The EB-5 program requires foreigners to lend $500,000 to U.S. businesses, typically to companies which are building offices and condos in major U.S. cities. The foreign EB-5 applicants can get most of their money back, effectively allowing them to get U.S. citizenship at very cheap prices.

The EB-5 program has been dominated by wealthy Chinese business owners. But only a few thousand Chinese investors can get actually green cards each year because the program is covered by Congress’ pro-diversity “country caps.” The caps means that nationals from each country can only get a small share of the 10,000 EB-5 green cards released each year.

The huge demand by wealthy Chinese — and the smaller number of annual green-card deliveries — has created a backlog of roughly 30,000 Chinese applicants who are waiting for their promised EB-5 green cards. For example, roughly 4,800 green cards were provided to Chinese in 2018. This backlog means Chinese investors cannot get green-cards via the EB-5 program for at least six years after they lend their money to U.S. investors. In turn, this delay has deterred other wealthy Chinese from using the EB-5 program and is sharply reducing Chinese lending to the U.S. real-estate sector.

The number of Chinese applicants for EB-5 program has dropped sharply in fiscal 2018 and 2019, according to the World Citizenship Council:

But the EB-5 delays will return in a few years as more Chinese lenders join the program and as more wealthy Indian lenders try to get some of the hugely valuable 10,000 green cards at the very low cost set by the EB-5 program.

The EB-5 industry — including many U.S. real-estate investors — has managed to block numerous EB-5 reform efforts, such as proposals to sharply raise the $500,000 loan. The Chinese lenders have also been lobbying U.S. politicians to support the Lofgren legislation:

The EB-5 program has also been mired in fraud and scandal, largely because there is little oversight over the third-party “EB-5 Regional Centers” can solicit overseas funding and then distribute it to real-estate investors. In November 2017, the federal government announced guilty pleas following an investigation into a Chinese-run investment center:

In relation to this case, [Victoria] Chan, along with other people and entities related to her, agreed to forfeit to the government eight properties worth nearly $25 million that federal prosecutors linked to the fraudulent scheme. A ninth property named in an asset forfeiture complaint related to the scheme, a parcel in Rancho Cucamonga, is expected to be forfeited in the coming weeks.

“This fraud scheme subverted the federal immigration process, which resulted in dozens of foreign nationals obtaining green cards they were not entitled to receive,” said Acting United States Attorney Sandra R. Brown. “In addition to the millions of dollars they charged in fees, Chan and her father personally benefited by wrongfully using the EB-5 investment funds to purchase expensive homes in their names. We are committed to preserving the integrity of this nation’s immigration system as part of our overarching dedication to protecting the national security of the United States.”

Members of the conspiracy convinced more than 100 Chinese nationals to invest over $50 million in CIIF and related companies, according to court documents. Some of the foreign nationals were on China’s “100 Most Wanted List” after being charged with crimes such as bribery.

The White House is also completing some regulatory reforms of the EB-5 program.

Lofgren’s bill and the EB-5 program are also being touted by the Cato Institute.

The rising tide of Chinese investment in the United States has also helped U.S. investors by inflating real-estate prices. The price rises are keeping many Americans from buying their own homes and are also raising rental prices, so reducing Americans’ spending on other goods such as autos, consumable, and families.

Many Americans say their incomes have been slashed by companies’ use of the EB-1, EB-2 and EB-3 green card programs to attract and pay cheap labor from India. During the last year, these professionals have organized into several groups, include the American Workers Coalition, doctorswithoutjobs.com, ProUSworkers, No on H.R. 1044, and The Multinational Coalition Against H.R. 1044/S. 386.

In 2018, these American opponents of the green card giveaway bill helped defeat Kansas GOP Rep. Kevin Yoder, who supported a prior version of the legislation. In turn, these professional groups are backed up by websites which are tracking the scale and location of the outsourcing industry in each legislator’s district.

Congress.gov shows the GOP sponsors of Lofgren’s EB-5 giveaway act, and the date when they co-sponsored her bill: