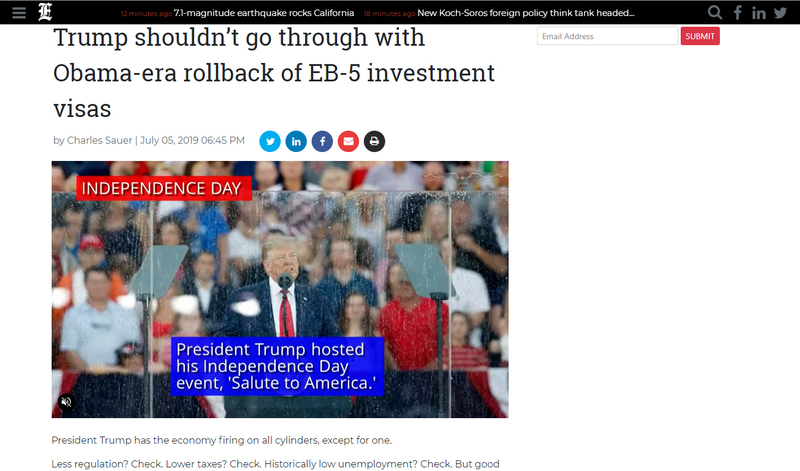 President Trump has the economy firing on all cylinders, except for one.

Less regulation? Check. Lower taxes? Check. Historically low unemployment? Check. But good trade relations? Not even close. Although Trump has done a lot of good, the instability in the economy generated by the president’s trade wars threatens to overshadow all of his achievements. And, to make matters worse, his administration is considering creating a new type of tariff, one on labor and investment. But it’s one started by the Obama administration.

The EB-5 visa program is an immigrant investor program that requires visa recipients to invest $1 million in a new business that will create at least 10 new jobs, or $500,000 if the investment is in a specific high-need area. This specific program is responsible for $20 billion in new investment and more than 174,000 jobs since 2008. That is a lot of jobs and a lot of capital that has been infused into the economy.

Although immigration might be a political issue for many, the EB-5 program should not be. As writer Dan Mitchell pointed out in an op-ed for The Hill:

While it is true that the overall issue of immigration is contentious, there are some areas where consensus should be possible. Especially if there are immigrants who unambiguously would increase per-capita prosperity in America.

That’s exactly what seems to be happening.

In early 2017, the Obama administration started the process of attempting to change EB-5 visas. Their plan was to raise the financial requirements for people to qualify for the program, likely severely cutting down the number of applications. Those changes still haven’t taken effect, but the Trump administration might go forward with instituting Obama’s reform. Yet the Obama administration wasn’t just trying to reform the system, their change was likely intended as a poison pill to kill the program altogether. And some heavy hitters in the Senate agree.

To grow the economy, we shouldn’t shrink the EB-5 program — we should expand it.

There are several ways to reform the EB-5 program effectively. First, the president could raise the cap from 10,000 recipients to 20,000. Or, he could stop counting family members against the 10,000 visa cap. However, the right decision is to let Congress work on it.

In fact, the president, any president, shouldn’t have the ability to make sweeping changes like this to any program. The Trump administration should table and put off any new rules, and allow Congress to change the law and reform the program through the legislative process. And then, every politician should decide that jobs in their district are more important than other political views on immigration that they may hold.