Protect and Expand EB-5 to Keep America Open for Business 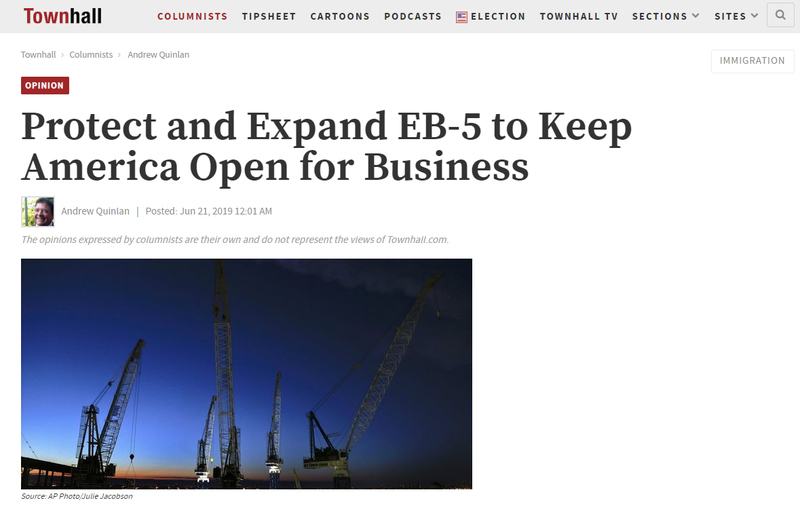 When we think about the ways that America competes in the global economy, trade, taxes, and regulations are the primary issues that come to mind. Often overlooked is the role that immigration can play, particularly when it comes to attracting foreign investment that creates jobs and boosts the U.S. economy. That oversight has allowed a counterproductive assault on the EB-5 investor immigrant program largely to fly under the radar.

The EB-5 investor immigrant program is a strictly merit-based system that allocates for foreign investors a relatively small number - currently capped at 10,000 - of the approximately 500,000 immigrant visas awarded annually. The goal is to attract successful individuals, often looking to escape poor or oppressive countries, willing to add their investment to the U.S. economy.

The program requires a minimum investment of $1 million - or $500,000 for designated Targeted Employment Areas that are either rural or feature high unemployment - that creates at least 10 American jobs. While any new worker can contribute and provide a net gain to the U.S. economy, EB-5 is thus unique among employment-based visas in that it requires no competition with domestic workers.

The program has been a huge success to date. A recent report from Economics and Policy Resources found almost $11 billion in capital investment brought in through the regional center program, which allows for combining EB-5 investment to facilitate larger projects, during federal fiscal years FY2014 and FY2015. That represents approximately two percent of all foreign direct investment net flows during that period. The report also found that regional center projects supported over 355,000 jobs, accounting for about six percent of all private sector job growth, during that same period.

Past studies have reported similar findings confirming the economic significance of the EB-5 program. But you can also see the impact more tangibly by visiting Hudson Yards in New York City. The impressive development is a sight to behold, providing housing, shopping, tourism, and modern office space attracting numerous global headquarters.

Without EB-5, Hudson Yards wouldn’t exist. The location would instead still be just an eyesore train depot providing limited economic benefit. The massive steel platform needed to allow the project to be erected over the existing depot proved too much to finance through traditional lending, which is why previous winning bidders dropped out before the project was able to take off once the strategy of using EB-5 was discovered.

EB-5, in other words, doesn’t just grow the nation’s capital stock but expands the types of projects that are viable. As another example, in Washington D.C. EB-5 has facilitated the revitalization of depressed neighborhoods and much-needed expansions to the housing stock.

But all this is in jeopardy. The Office of Management and Budget is currently reviewing an Obama-era regulation that would make it a lot more difficult for developers to raise EB-5 capital.