Why Congress must address this merit-based immigration reform idea 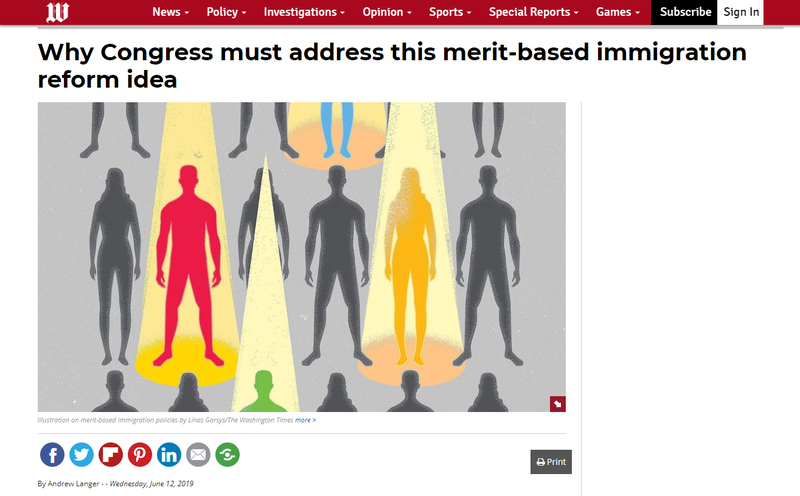 A few weeks ago, I was in New York City and saw the majestic Hudson Yards real estate development. This is the largest private real estate development in the whole nation that was built over a rail yard. You really need to see it the next time you are in New York to appreciate how amazing this combination of residences, office buildings, a mall and a 16-story-high structure of connected staircases called “The Vessel” that provides a great view of the Hudson River. This project would not exist today, but for the EB-5 investor visa program.

The EB-5 Immigrant Investor Program is a merit-based immigration category that has the unique impact of both creating thousands of U.S. jobs combined with tens of billions in direct foreign direct investment in U.S. infrastructure projects. It was created back in 1990 and offers an immigration visa to those who invest between $1 million and a half-million, depending on the area, and create at least 10-12 American jobs. One challenge is that the Obama administration delivered a regulatory time bomb by launching a change to the program in the last months of that administration intended to sabotage the program. For some reason, the Trump administration has not yet squashed this job-killing and investment-deterring regulation yet.

Congress, not the executive branch, should take control and make changes the program to make it better. One concern many have is that the program is hampered because it is too small. Congress should expand the program to allow more investment and job creation by raising the caps on the numbers of foreign investors into the program. A permanent authorization of regional programs would give the business community certainty to make long-term planning on projects. Eliminating per-country quotas and inclusion of the counting of immediate family members in the cap that limits the amount of money coming into the United States for new projects is another common-sense reform. Also, recapturing unused immigrant visas for the past 20 years would take care of a large backlog of applications that have yet to be acted upon. These reforms would strengthen and update the program to reflect the challenges of today’s global economy.

Another bucket of reforms will address the allegations of fraud and mismanagement. More security, transparency and compliance is necessary with this program to restore confidence that fraud is being addressed. Pre-approval of project business plans for the regional centers and requiring those centers to disclose financial statements related to EB-5 projects will promote greater transparency and accountability in how EB-5 related funds and fees are used. Aggressive screening of owners and managers of regional centers is necessary to ensure the program’s confidence from members of Congress worried about abuse of these visas.

Numerous studies show that this program is great to expand the economy. A new study released by the Economic and Policy Resources group on March 19 found “a total of $10.98 billion in capital investment was made through the Regional Center program during FY2014 and FY2015 using IIUSA’s EB-5 Regional Center project data. That total represented approximately two percent of all foreign direct investment (FDI) net flows to U.S. economy over the two-year period. A total of $7.07 billion, or nearly two-thirds, of the Regional Center program’s project capital investments made through Regional Centers during the study period was in the construction sector.” These significant figures represent the future investment lost if this program is sabotaged by an Obama administration midnight regulation that is still pending in the Trump administration.

Just take a look at projects like the Hudson Yards in New York City to see a project that likely would not exist if the EB-5 program were terminated. The program falls into the category of merit-based immigration that America needs right now to draw in foreign investment and to create new American jobs. If Congress can pass legislation, possibly as part of a package considered when they address the Trump administration-supported Kushner immigration plan and the Democrats push on the DREAM Act, the economy will thrive with massive new job creation and investment.