Is buying a slice of the American Pie about to change 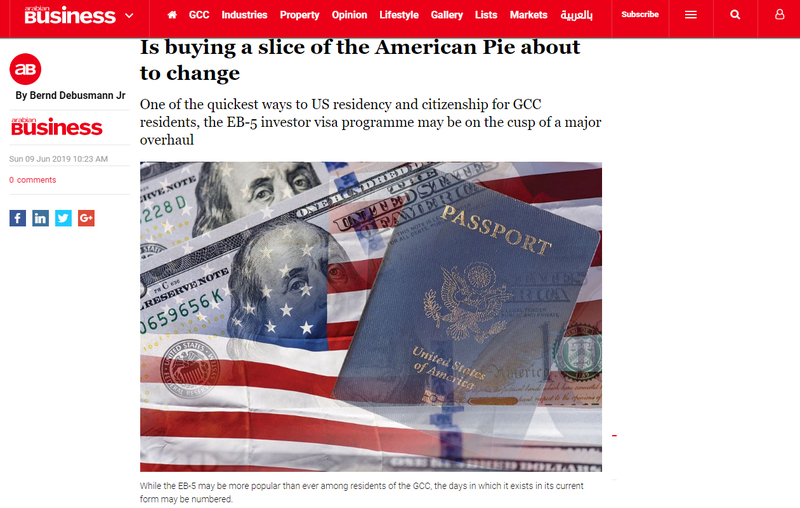 One of the quickest ways to US residency and citizenship for GCC residents, the EB-5 investor visa programme may be on the cusp of a major overhaul

While the EB-5 may be more popular than ever among residents of the GCC, the days in which it exists in its current form may be numbered.

For millions of people around the world, getting a Green Card, the cherished document for working and living in the United States and eventually obtaining citizenship, is a long and arduous process. It can take many years. But there is a way to shorten the route – investment, and understandably, a rising number of GCC residents are opting for it.

The standard process is based on family sponsorship, a lottery system, or as “priority” skilled professionals. The path leading through investment is known as the EB-5 Immigrant Investor Visa Programme. Created in 1990 during the administration of President George H.W. Bush, it requires would-be immigrants to invest a minimum of $500,000 in ‘targeted employment areas’ that are either largely rural or facing high unemployment.

The goal? To create jobs for Americans, the often-repeated campaign promise of many a US politicians. Through the EB-5 programme, each investor is required to create or preserve 10 jobs for US workers, excluding themselves and their family members.

However, the programme, which initially required applicants to set up a physical entity and operate in the country as well as invest $1m, has long lay largely dormant, under-utilised and misunderstood, even after it was revised to allow for passive investors to inject money from abroad - then came the financial crisis of 2008 and 2009.

“The programme remained quiet for a time, but under the Obama administration, because we had a downturn in the global economy, there was then a great need at that point to create new jobs and bring in more foreign capital,” explains Shai Zamanian, a US-licensed, Dubai-based attorney who specialises in helping people apply for EB-5 visas. “That’s when the threshold was lowered. Now people are investing without having to actually do anything or control any business.”

GCC participants on the rise

According to statistics from US Citizenship and Immigration Services (USCIS), in 2018, 54 UAE residents were approved for the programme, a 350% jump from 2017. Neighbouring Saudi Arabia – which saw just a single approval in 2017 – recorded 15, a 1,400% increase. Similar numbers were recorded in Qatar.

Kuwait, Bahrain and Oman, which between them did not have a single approval in 2017, recorded four and two each, respectively, in 2018. In total, the countries of the GCC recorded 93 approvals in 2018, a 564% increase from the previous year.

As Zamanian tells it, the rapid increase is partly explained by the fact that in the age of Donald Trump – who campaigned largely on an anti-immigration platform – many other avenues that were available to potential immigrants are no longer open.

“A lot of programmes that Indians, Pakistanis and other people from these regions relied on have now shut down or are quite limited in their scope,” Zamanian adds, giving the examples of the H1-B temporary worker visa or the E-2, a temporary investor visa for which one is required to return to their country afterwards. “All these programmes are also facing a higher degree of rejection.”

Stuart Ferguson, the CEO of American Dream, a South Africa-headquartered firm with offices in Dubai that focusses on EB-5 applications, argues that the reason for the spike is largely due to increased awareness of the benefits the EB-5 programme has over other residency or citizenship by investment schemes, like those in the Caribbean or in Europe.

These programmes, he explains, may not allow for immediate residency, do not necessarily result in a second passport, and – importantly – place limits on what an applicant can invest in.

“In an EB-5 case, the initial outflow of capital does come back to the investor, whereas if they’re investing in the Portuguese ‘golden visa’ or one of the Caribbean programmes, then they are tied to a particular asset class,” he notes. “There’s also a lot of flexibility in the EB-5 programme. Also, access into Europe may not be as attractive as it seemed years ago. There’s been a general turnaround and a lot more exposure among Gulf residents with respect to the benefits of the EB-5.”

Changes on the horizon?

While the EB-5 may be more popular than ever among residents of the GCC, the days in which it exists in its current form may be numbered.

Given the heated politics of immigration in the United States, it should come as no surprise that the EB-5 visas have been – and continue to be – a contentious issue in the halls of power of Washington DC, with opponents arguing that the programme is being defrauded, misused or a risk to national security.

Among the most common gripes is that funds raised through the programme’s various regional centres are going towards economic centres such as New York City or San Francisco, rather than the economically challenged areas it was originally intended to help.

“For years, I have watched as the EB-5 programme has become riddled with fraud,” Republican Senator Chuck Grassley wrote in a letter to President Donald Trump in June 2018. “One of Congress’s core purposes in creating this programme – to direct investment to rural and high unemployment areas that struggle to obtain capital and create jobs – has been eroded due to the abusive gerrymandering of economic development incentives by big moneyed Manhattan interests.”

Notably, among the ‘big moneyed’ stakeholders reported to have taken advantage of the programme is President Donald Trump himself. In 2016, Bloomberg reported that $50m was raised through EB-5 visas for a Trump-branded luxury rental building in New Jersey built by Kushner Companies. At the time, the firm’s CEO was Jared Kushner, the president’s son-in-law and senior advisor.

“The president is well aware of this programme and he and his directors have used it in funding Trump-branded towers where foreigners have paid for construction development,” Zamanian says.

“Although he doesn’t speak about the EB-5 programme and focuses on limiting immigration in terms of refugees or whatever the case may be, we believe that in the background, he views this as highly favourable. Perhaps for that reason we are seeing approval times come through very quickly,” he adds.

Given Trump’s tacit approval of the programme, both Zamanian and Ferguson agree that the EB-5 is here to stay. Nevertheless, both believe that significant changes are on the horizon, which may include increased government oversight of projects and steps taken to direct the funds raised to new areas.

From an investor’s standpoint, however, the most significant change is likely one of cost, which remains relatively low when compared to many citizenship by investment programmes around the world. Cyprus, for example, requires an investment of $2m.

“It is highly unlikely that the threshold will remain at $500,000… it was lowered because we sincerely needed job creation and required foreign investment to come in and help us recover,” Zamanian warns. “As it stands today, unemployment is at a low. Investors should understand that there is less of a need for job creation and for this programme, generally. The amount will go up.”

One idea currently under debate, according to reports from Washington, is an increase from $500,000 to at least $1.3m for projects in high unemployment areas and from $1m to $1.8m for more ordinary projects.

Ferguson says he warmly welcomes any change to the financial threshold of the EB-5 programme.

“That means that you’re going to be dealing with far more sophisticated investors who will be taking additional due diligence with respect to the various programmes that they invest in,” he explains.

“I think he’s happy with the programme, but you never know. There’s a lot of uncertainty with the Trump administration and immigration policy can change overnight; in a snap,” he explains. “Sometimes, the way that I’m informed that things have changed in the US in terms of immigration is that I start getting calls at 6 AM informing me that as we slept overnight here in the GCC, new rules have formed in the US.”

Whatever the case may be, the end result has been that there has been a massive spike in interest from those hoping to make good on their EB-5 applications before the amount of capital required goes up, therefore creating a sense of urgency among would-be applicants in the GCC and elsewhere in the world.

“We’re seeing a major surge at the moment from all regions,” Ferguson adds. “In jurisdictions like the Gulf, Sub-Saharan Africa and parts of Asia, we are seeing a phenomenal load of inquiries coming through for those wanting to ensure that they meet the ‘sunset date’ this year.”

Around the world, a number of other countries have adopted citizenship-by-investment programmes, each with their own requirements and benefits. St. Kitts and Nevis, for example, requires a minimum investment of $150,000, with citizenship available in between four and six months.

In more highly sought-after countries of the European Union, the required investment is higher, with Cyprus stipulating an investment of €2m ($2.23m) in real estate, and citizenship available in as short as three months. Ireland has also adopted a residency-by-investment programme similar to the American EB-5, allowing applicants to live in the country for a period of five years with investments ranging between €500,000 ($559,467) for endowment-related investments to €2m ($2.23m) in the Immigrant Investor low-interest bearing government bond.

“If you are leaving a troubled area and want security, then cost really is irrelevant for your family or education for your children,” says Gaetano Giornofelice, senior consultant at Vazir Group, a Dubai-based immigration service.

“Malta and Cyprus are the two up-and-coming places for this. There are a lot of opportunities there, it is very close to the EU and the investments are much better there.”