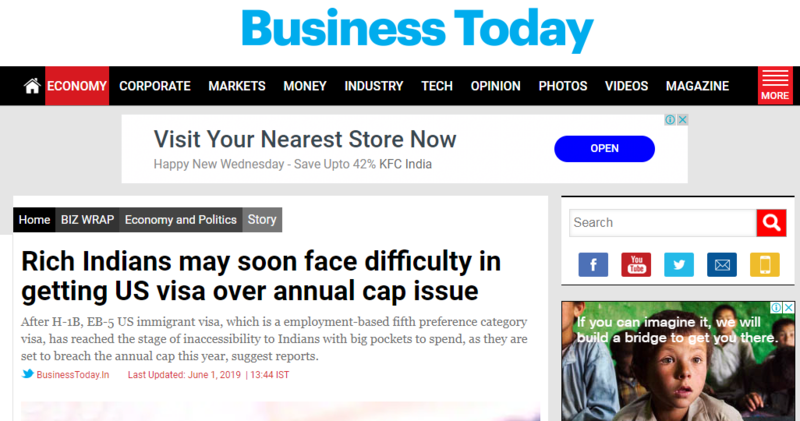 With the US making several changes in its immigration policy, it's becoming tougher for Indians enter the country. After H-1B, EB-5 US immigrant visa, which is a employment-based fifth preference category visa, has reached the stage of inaccessibility to Indians with big pockets to spend, as they are set to breach the annual cap this year, suggest reports.

Alongside an increase in the number of applicants, Indians applicants are about to hit its allotted quota for the EB 5-visa, which is a method to obtain a green card for foreign nationals who invest in a "new commercial enterprise" in the US. An estimated 1,000-plus high net worth individuals of Indian origin filed EB-5 visa application last year to move to the US.

EB-5 visa, which is one of the five employment-based (EB) preference programmes in the United States, is for those who invest in commercial enterprises associated with regional centres approved by USCIS (US Citizenship and Immigration Services) based on proposals for promoting economic growth. An EB-5 applicant is required to invest $500,000 (about Rs 3.25 crore) in a commercial enterprise that creates at least 10 US jobs. In return, the applicant can get a green card in one-and-half to two years.

The US government allocates 10,000 visas for foreigners who invest through the EB-5 programme every fiscal year starting October 1, with a country cap of 7.1 per cent or 700 visas. However,  EB-5 visa filings from India have increased from 99 in 2014 to more than 500 in 2017. India is set to hit its allocated quota of EB-5 for the first time this month, the Economic Times reported.

"India is exceeding its annual EB-5 cap for the first time and is about to face retrogression/backlog for FY19-20," Vivek Tandon, founder and CEO of advisory firm EB5 BRICS told ET. He added that H-1B and L-1 visas were right now the toughest to get, while EB-5 was one of the easier ones to acquire. However, the cap for EB-5 is likely to reach by June.

There is a rise in the demand for EB-5 visas from Asian countries. China and India, the two toppers in the list of foreign students studying in the US, have been opting for the EB-5 immigrant investor programme owing to stricter regulations on other visa categories such as H-1B and H-4. EB-5 service providers claim that at least 30-40% Indians are turning from H-1B and L-1 visas to EB-5.