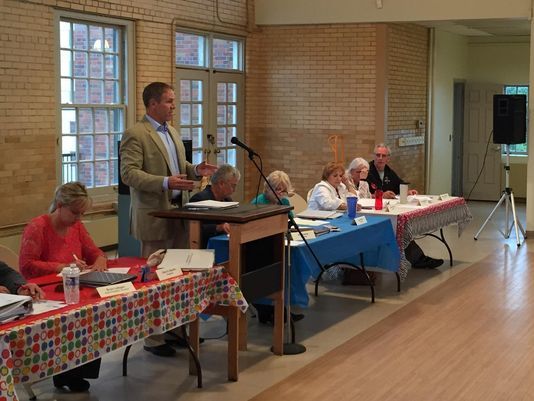 A developer fielded questions Monday night in Charlotte about his plans to build a hotel and condominiums on what is now city-owned land at the Port of Rochester.

It quickly became clear that people concerned about the project wanted more answers than he could provide in a brief presentation at a Charlotte Community Association meeting at the Roger Robach Community Center.

Gregory Weykamp, principal of Edgewater Resources, said he will present several options for the design of his 10-story building to the city's Project Review Committee on Wednesday. After getting the city's feedback, Weykamp said he would return later to the community for more input and would attempt to recapture "the golden era of the resort here."

Critics continued to question the suitability of the project site.

Opponent Bill Brown said there are too few test borings on the depth of the bedrock on which Weykamp may have to anchor his building. While Weykamp said the site is similar to other waterfront projects, Brown insisted he could find no others built on what he described as a steep, buried canyon wall.

"If I were building a $21-million building, I'd want to know where the bedrock is," said Brown, a systems analyst.

Weykamp said his own geotechnical engineer has looked at the existing evidence and found that the site can be developed with a deep foundation.

He said afterward that he will do further site testing as he fleshes out project costs.

"My geotechnical engineer is confident, and I am confident in him," Weykamp said to Brown. "The costs are mine, not the city's or yours."

Others at the meeting raised questions about the project's viability and financing, which will partly include foreign investors through the federal EB-5 program.

Weykamp said other than a temporary tax abatement for condo buyers, he doesn't plan to seek further taxpayer support. He said he and his partner have invested $200,000 of their own money in the early stages of the project.

He said he and city officials expect to wrap up a legally binding document further detailing plans for the site within a few weeks and will post it on the city's website. Edgewater aims to close on its purchase of the site in about a year.