Surge in Gulf applicants expected for US investor visa scheme 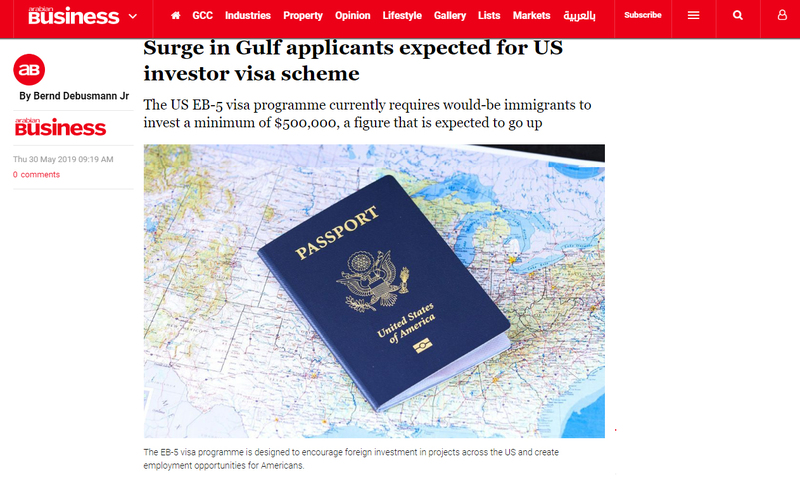 The US EB-5 visa programme currently requires would-be immigrants to invest a minimum of $500,000, a figure that is expected to go up

The EB-5 visa programme is designed to encourage foreign investment in projects across the US and create employment opportunities for Americans.

A “rush” of GCC residents are expected to apply for the US EB-5 immigrant investor visa scheme ahead of possible reforms that may see it become more expensive, according to experts.

Established in 1990, the EB-5 visa programme is designed to encourage foreign investment in projects across the US and create employment opportunities for Americans.

The programme requires would-be immigrants to invest a minimum of $500,000 in ‘targeted employment areas’ that are either rural or face high rates of unemployment.

The EB-5 has seen a dramatic increase in the number of approvals from the GCC, which collectively rose 564 percent to 93 approvals – a majority of them expats - in 2018.

A total of 54 UAE residents were approved for the programme in 2018, a 350 percent jump from the year before. Neighbouring Saudi Arabia, which saw just a single approval in 2017, recorded 15, a 1,400 percent increase.

Several American politicians, however, have expressed opposition to the programme, arguing that the programme is being defrauded, misused or a risk to national security.

Among the reforms that the programme’s detractors have called for is an increased investment threshold, with some calling for it to be increased to at least $1.3 million for projects in high unemployment areas and from $1 million to $1.8 million for more ordinary projects.

“It is highly unlikely that the threshold will remain at $500,000,” said Shai Zamanian, a US-licensed, Dubai-based attorney who specialises in helping people apply for EB-5 visas. “As it stands today, unemployment is at a low. Investors should understand that there is less of a need for job creation and for this programme, generally. The amount will go up.”

While Zamanian added that he is concerned that changes to the policy could come suddenly, he believes that if there is ample warning then there may be a sudden rush of applicants hoping to take advantage of the $500,000 threshold before it changes.

“With the current administration as it is today, immigration law changes overnight. We might not have that cushion to adapt,” he said. “But if there is a chance to adapt to a price change, then there would be a mad rush.”

Zamanian added that given the length of time needed to put together a “respectable” application, it may be difficult to do so in time if applicants wait until reforms to the programme have been announced.

“To wait to find out when the price is going up to then react, you may be out of time at that point,” he added. “You might have missed that ship, unfortunately.”

Stuart Ferguson, the CEO of American Dream, a South Africa-headquartered firm with offices in Dubai that focuses on EB-5 applications, said he believes an overhaul of the EB-5 programme will take place before September of this year.

“We’re seeing a major surge at the moment from all regions,” Ferguson adds. “In jurisdictions like the Gulf, Sub-Saharan Africa and parts of Asia, we are seeing a phenomenal load of inquiries coming through for those wanting to ensure that they meet the ‘sunset date’ this year.”