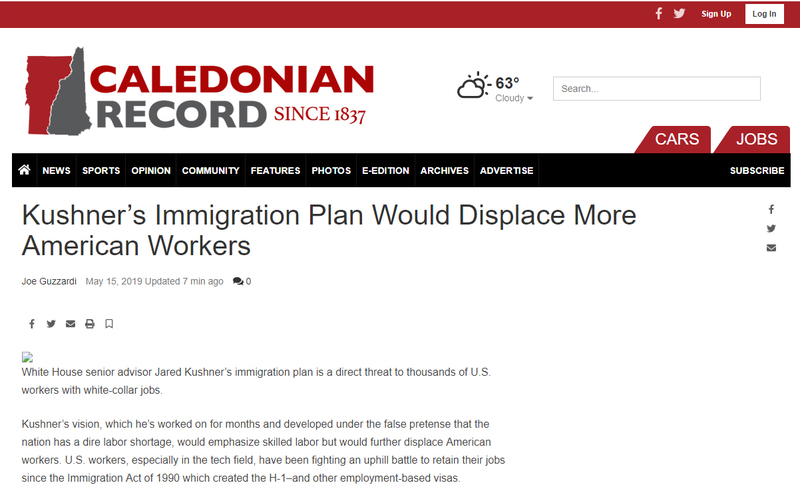 Kushner’s vision, which he’s worked on for months and developed under the false pretense that the nation has a dire labor shortage, would emphasize skilled labor but would further displace American workers. U.S. workers, especially in the tech field, have been fighting an uphill battle to retain their jobs since the Immigration Act of 1990 which created the H-1–and other employment-based visas.

The H-1–and its job-killing cousin, the L-1, which facilitates overseas intra-company transfers of questionable value, have destroyed entire domestic IT departments. Case in point: Siemens ICN fired its well-educated, experienced tech department, forced them to retrain their South Asian replacements, and paid the ousted employees a pittance as severance.

In his letter to the Wall Street Journal, Mike Emmons, a fired Siemens tech worker, related his personal anguish when he realized that he was being replaced by a younger, less-skilled, less-experienced but cheaper foreign-born worker. Hilarie Gamm, author of “Billions Lost” and a 25-year tech veteran, said Congress’ mission should be to retain American workers, not accelerate their demise with H-1Bs and other job displacement visas.

To immigrants striving to stay in the U.S., the Green Card lure is more powerful than money. As for those recent college graduates who have invested a small fortune in the diplomas they hope will help them land a high-paying job, they’re simply out of luck. In recent years, the maneuvers ,’ legal but questionable ,’ to undermine American kids have mushroomed.

The Curricular Practical Training program provides one-year work permits to foreign students enrolled in U.S. colleges. In 2017, 132,796 foreigners held CPT work permits, according to federal data. The CPT program works in concert with the Optional Practical Training program, another work permit vehicle. OPT allows foreign graduates of U.S. universities to work up to three years, in the U.S. In 2017, 291,635 foreigner nationals received, one-year OPT work permits,, and another 60,410 were given three-year OPT work permits. In the two prior years, 67,000 people were issued three-year OPT permits. Some now work at Amazon, Intel, Microsoft and other coveted employment destinations.

Kushner didn’t solicit the many stories of displaced Americans. Instead, he sought the perspectives of big business. Unfortunately, Kushner’s sympathies may align more with cheap labor-addicted employers than with recently displaced Americans. A few years ago, Kushner shamelessly built a luxury Jersey City riverfront skyscraper with federal EB-5 funds intended for economically distressed areas. The immigration accord that President Trump authorized Kushner to negotiate has given Kushner a chance to cozy up to industry titans.

The fraud-ridden EB-5 Kushner took advantage of is scorned everywhere except on Capitol Hill where Congress refuses to kill it, and except among the lucky 9,000 recipients, up from 64 in 2003, who write a check, then get a visa, and bring family along for the ride. A Washington Post editorial, “An Immigration Policy Worth Ending,” states that the EB-5 “has created a lot of jobs for consultants, lawyers and lobbyists, who get paid to entice wealthy foreigners into applying for the visas, and to persuade Congress to renew it each year.”

Some good news about Kushner’s much ballyhooed immigration proposal. Republican senators gave Kushner’s plan the lukewarm reception it deserves, and Democrats will surely be unanimously opposed. President Trump’s goal should be to weed out CPT, OPT and other employment-based visas, while lowering the 1 million plus legal immigrants who arrive annually and receive lifetime-valid work authorization permits.

Americans overwhelmingly want less immigration; a Harvard-Harris poll found that 81 percent of voters want immigration cut from its current level, and 63 percent want to cut it by half. Those are the marching orders President Trump and Kushner should follow.