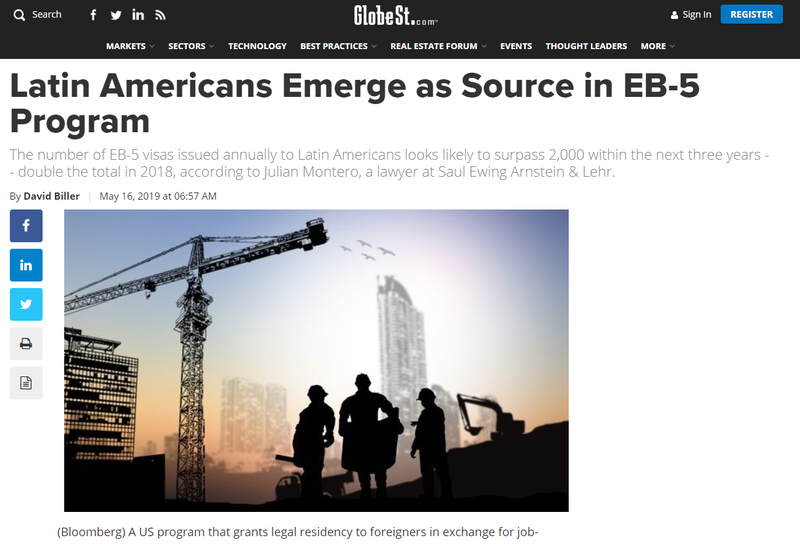 The number of EB-5 visas issued annually to Latin Americans looks likely to surpass 2,000 within the next three years -- double the total in 2018, according to Julian Montero, a lawyer at Saul Ewing Arnstein & Lehr.

US program that grants legal residency to foreigners in exchange for job-creating investments is drawing a wave of interest from Latin Americans fleeing turmoil in their home countries.

For Brazilians, the number of visas from the program, known as EB-5, rose tenfold from 2015 to 2018 as Latin America’s largest economy struggled to emerge from a crushing recession. Venezuela’s total jumped as it spiraled deeper into hyperinflation. For Mexico, the increase coincided with left-wing populist Andres Manuel Lopez Obrador’s successful presidential campaign. All three countries have also suffered surges in violent crime.

“When people see their own country facing dramatic or fundamental economic and political changes, they decide for a change, either for themselves or the next generation,” said Rodrigo Azpurua, whose company, Riviera Point Invest + Develop, has used EB-5 funds to build real estate projects in South Florida.

Venezuelans invested in Riviera’s office complex in Doral, Florida, just down the road from the golf course that staged the PGA’s 2018 season-ending competition for Latin American athletes. Brazilians helped fund construction of Orlando’s Major League Soccer stadium. And Latin Americans have financed a slew of hotels in the U.S. under brands including Hilton, Marriott and Radisson.

They’re jumping into a controversial program at a time when lawmakers have called for tighter regulation, or even its outright elimination. EB-5, which requires a minimum of $500,000 into efforts that employ at least 10 U.S. workers, has been dogged by cases of fraud, and critics say it allows the wealthy to buy green cards, leapfrogging other qualified applicants.

While EB-5 was designed to benefit a broad range of industries across the U.S., it has emerged as a key fundraising tool for the real estate industry. Countless developers including the firm run by the family of Jared Kushner, President Donald Trump’s son-in-law and senior adviser, have used money from EB-5, and the program was crucial to construction of the $25 billion Hudson Yards project on Manhattan’s west side.

Chinese investors have long dominated the program, which has a global target of about 10,000 green cards a year. EB-5 is still popular in China, but developers have been looking elsewhere for funds, including Latin America.

The number of EB-5 visas issued annually to Latin Americans looks likely to surpass 2,000 within the next three years — double the total in 2018, according to Julian Montero, a lawyer at Saul Ewing Arnstein & Lehr who assists clients with such investments. The surge in interest from Latin Americans comes at a time when Trump has attacked immigration, both legal and illegal, and its perceived impact on the U.S. job market and national security.

Changes to EB-5 depend “on support from the White House, which is extremely unpredictable,” Greg Chen, director of government relations at the American Immigration Lawyers Association, said by phone. “I think there is bipartisan support for reforms.”

Criticism and calls for changes to EB-5 have come from both sides of the political aisle. Senator Dick Durbin, a Democrat from Illinois, has repeatedly questioned whether the wealthy should be able to “buy legal status in the United States.” And Republican Senator Chuck Grassley of Iowa, in a letter to Trump last year, urged the president to take measures to rein in abuse, lest EB-5 undermine the public’s faith in his broader immigration policy.

Tighter controls are needed because even rare incidents of fraud can erode confidence in the program, according to Carlo Barbieri, chief executive officer of Oxford Group, a South Florida-based consulting firm that helps foreigners choose sound EB-5 investments. New rules may also channel funds toward the heartland, he said. For now, the biggest recipients of EB-5 are New York and California, with Florida, Texas and Washington also drawing significant funding under the program.

“We need to have really good regulation to stimulate investment in the countryside and in some areas that really need support,” said Barbieri, whose clients are mostly from Brazil. “Brazilians who are interested in the program should seize the moment, because it is still unclear what changes should occur in EB-5.”