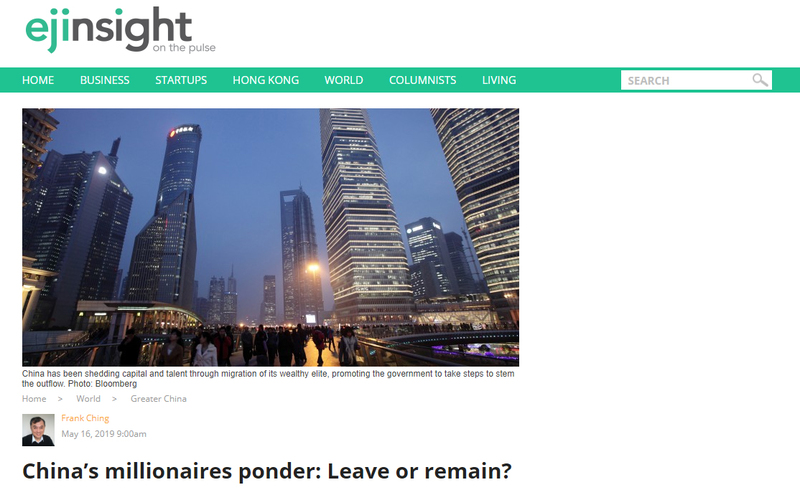 China has been shedding capital and talent through migration of its wealthy elite, promoting the government to take steps to stem the outflow.

Every year for the last decade or so media reports would appear focusing on the plans of China’s millionaires to leave the country. It was unclear how candid such high-net-worth individuals were in responding to interviewers but, usually, an alarming story would appear – alarming, that is, to the country’s leaders – to the effect that many rich people were planning to pull up stakes.

Although its per capita income is still low, China today has 658 billionaires, more than the 584 in the United States, according to the Global Rich List published by Shanghai-based Hurun Research Institute, which tracks rich people worldwide.

Five years ago, a note of urgency entered the reports.

In 2014, Barclays Wealth reported that almost half of China’s high-net-worth individuals aimed to move within five years, that is to say, by 2019. The study, done jointly with Ledbury Research, said that 47 percent of Chinese millionaires planned to emigrate, while 20 percent had not made up their minds.

The study said China presented the highest rate of planned millionaire flight in the world, exceeding Qatar at 36 percent and Latin America at 34 percent.

In 2016, the Hurun Report and its associate Visas Consulting Group reported that more than 60 percent of China’s richest people planned to invest in properties abroad in the next three years as part of their migration plans.

The survey included conversations with 240 wealthy people with average net assets of US$4 million. Some had already emigrated while others were planning to do so.

The most popular destination of those planning to leave was the United States. But a problem has arisen with the nation’s EB-5 investment visa program, which gives green cards to those who invest US$500,000 and create 10 jobs. The program has been so successful that there is now a wait period of well over 10 years. This makes it impractical for parents to plan for the education of their children since kids can no longer qualify for dependent visas when they turn 21.

China-born investors have accounted for about 80 percent of the 10,000 EB-5 visas available each year since 2012.

Similarly, Canada’s Federal Immigrant Investor Program attracted so many Chinese applicants that the government shut down the program in 2014 because of the logjam.

Options for would-be immigrants are narrowing though new ones, primarily in Europe, are opening up. Greece, Spain, Portugal and Malta all offer investment visas.

And, of course, there are island nations that offer passports for cash. Vanuatu, a Pacific island nation, is probably the most successful. Citizenship is available to those who invest US$150,000 or more. So popular is this that the money accounts for 24 percent of Vanuatu’s total government revenue.

Clearly, China has been shedding capital and talent through migration of its wealthy elite. The government has taken steps to stem the outflow of capital. The crackdown on corruption, no doubt, also had an impact.

In 2017, there was a shift in sentiment. Hurun reported that while a majority of mainland millionaires still said they wanted to leave, 44.5 percent said they would stay.

On June 30 last year, Hurun and Visas Consulting released their new report. According to the report, about 37 percent of HNWIs were considering migration, a 10 percent drop compared to the previous year.

Intriguingly, the report also said that “90% of Chinese HNWIs considering emigration plan to retire in China.” That suggested that the vast majority of those who plan to go abroad also intend to retire in China. That is, they were not turning their backs on the land of their ancestors.

Instead, what was driving them away were the problems they faced in China, beginning with getting their children a good education. At the most basic level, they were concerned with the polluted air they were forced to breathe and the lack of food safety as well as the quality of healthcare in China.

China’s leaders should be pleased that fewer people want to leave and that those who leave plan to return. Making China a country where people want to bring up their children and to live out their retirement years is something well within the control of the Chinese authorities. It can be done.