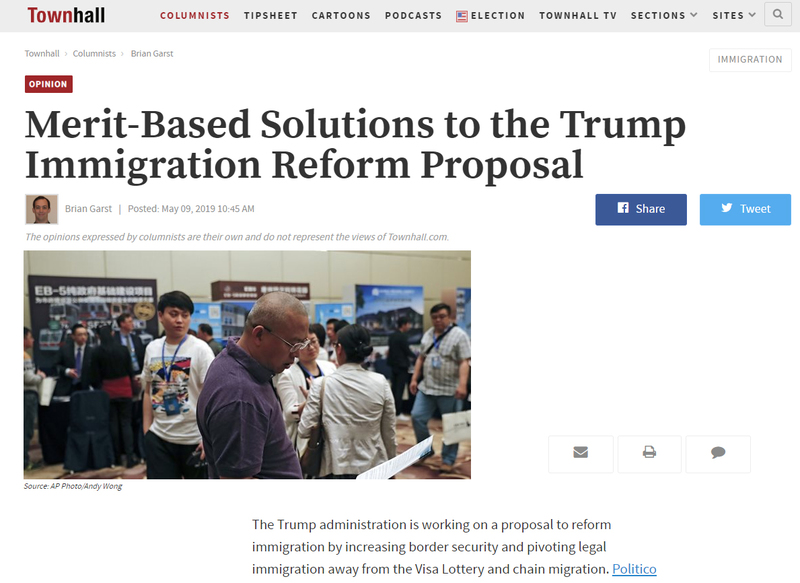 The Trump administration is working on a proposal to reform immigration by increasing border security and pivoting legal immigration away from the Visa Lottery and chain migration. Politico reported on May 7, 2019, “Jared Kushner briefed senators Tuesday on an immigration proposal meant to boost border security and set up a new merit-based system that would keep the number of legal immigrants coming into the U.S. at current levels, according to administration officials and lawmakers.” The EB-5 Investor Visa program is a perfect fit in a merit-based reform effort.

The EB-5 program allows immigrants to apply for a visa if they invest in a U.S. commercial project that creates American jobs. The program was created in an effort to lure foreign investment that both provides needed money for infrastructure projects and lowers unemployment. According to the U.S. Citizenship and Immigration Services, “Under a program initially enacted as a pilot in 1992, and regularly reauthorized since then, investors may also qualify for EB-5 classification by investing through regional centers designated by USCIS based on proposals for promoting economic growth.” Foreign investors must put up $1 million with an exception for targeted areas with high unemployment where an investor must put up $500,000 instead. In addition, the investor must create at least 10 full time positions. If the investor qualifies, they will be provided a visa and provided the opportunity for lawful permanent resident status.

President Donald J. Trump has been a frequent proponent of converting current law towards a merit-based system, and the EB-5 program has proven to be a merit-based success. The American Action Forum released a report in January of 2018 that found, “EB-5 immigrants have invested at least $20 billion in the U.S. economy since 2008, with over $5 billion invested in 2017 alone.” They also used government data to calculate that “projects associated with EB-5 investments have created over 174,000 jobs, which equates to approximately 16 jobs per investor.” These are great numbers and an increase in the program would contribute to the Trump administration’s efforts to promote policies that expand the private sector while reducing unemployment numbers to even more historic lows.

Other data indicates that this program has expanded the economy by billions while creating a large number of jobs. According to Department of Commerce statistical data, about 11 thousand EB-5 visa holders directly invested $5.8 billion back in FY2012 and 2013 that aided in a total of $16.7 billion raised for 562 projects. While those are older numbers, a more recent look at the program would likely further show that this program has lowered unemployment while helping the economy to grow.

Notably in the current political climate, the EB-5 program does not allow these visa holders to compete with American workers. They do the opposite by spurring economic growth and helping Americans get off the unemployment line and into jobs. This program is a magnet for investment that would otherwise be used abroad—over which other governments compete using similar programs—and brings needed cash into the United States to build up American infrastructure projects.

Politico reports that Kushner “has been quietly working on the plan for several months. He has told allies that he believes he has the buy-in of Trump and other more hard-line administration officials, even though some Trump allies and the president himself have previously backed efforts to slash legal immigration.” The plan is said to target high-skilled workers, so the EB-5 program to attract successful and business-savvy investors should be added to this proposal.

Our immigration system is in dire need of reform. The president is correct when he touts a merit-based system that provides an opportunity to move our immigration system away from chain migration and the Visa Lottery. An effective merit-based system must include incentives for wealthy foreigners to bring their money to the United States, thus helping the push to sustainable full employment, instead of taking it to any of the many other jurisdictions competing for foreign investment. Not including the EB-5 program in this new push would be a mistake that hurts the U.S. economy and workers.