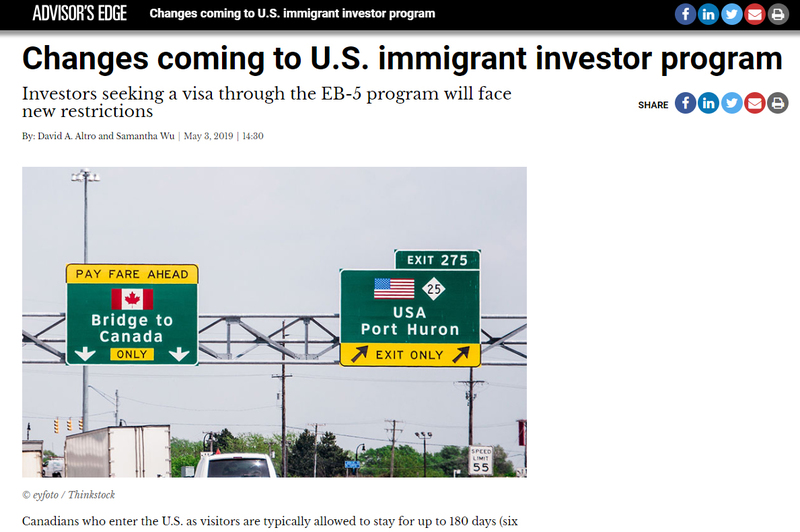 Canadians who enter the U.S. as visitors are typically allowed to stay for up to 180 days (six months) per year. Those who have purchased vacation homes in warmer states like Florida or Arizona are often curious about their options for spending more time down south.

To stay longer than what’s allowed for a tourist, clients will have to obtain an appropriate visa or a green card. There are many different types of visas for living and working in the U.S., all temporary in nature and requiring renewal. The frequency depends on the visa, and some allow an adjustment to a more permanent status.

The green card, on the other hand, provides the holder with permanent residency status. One path to obtaining a green card is by getting an L1-A/B or H1-B visa and later petitioning for adjustment to a green card. However, it requires that the visa holder work in the U.S.—not a preferred option for retirees or leisure travellers.

Instead, some Canadian snowbirds have obtained a green card by first investing in the EB-5 Immigrant Investor Program. The EB-5 visa was created by Congress in 1990 as a program for job creation and to drive foreign investment to stimulate the U.S. economy. Applicants must invest at least US$500,000 into an area of high unemployment or desired economic expansion, known as targeted employment areas (TEAs). There is also a requirement to indirectly create 10 jobs.

Getting a green card through the EB-5 program not only requires a substantial financial investment, but the type of investment must be carefully investigated and approved by the state, which determines TEAs. Typically, a conditional green card is issued to the investor within 18 to 24 months.

The EB-5 program has been criticized for loopholes that have led to abuse. Rather than funding high unemployment areas, money has sometimes gone to developments in wealthy cities.

Reform is underway and the revised regulation has reached the final stage of review before becoming law. The changes will likely come into effect once the extension for the EB-5 regional center program expires on Sept. 30. Two major proposed changes expected to be included are:

An example of an approved EB-5 case was a limited partnership owning a Seattle hotel development where Marriott was the hotel operator. This EB-5 initiative was categorized as a “regional center project” inside a Washington-based TEA. A regional center project is ideal for clients who prefer a hands-off approach. As a limited partner in a pooled investment, the client doesn’t have to participate in the day-to-day management.

Clients can find information on sourcing approved EB-5 projects through online forums or seek advice from a firm familiar with the program’s parameters.

With EB-5 reformation looming, clients wishing to take advantage should apply to the program as soon as possible to benefit from the current investment amounts and access to projects that may no longer qualify as TEAs under the new rules.