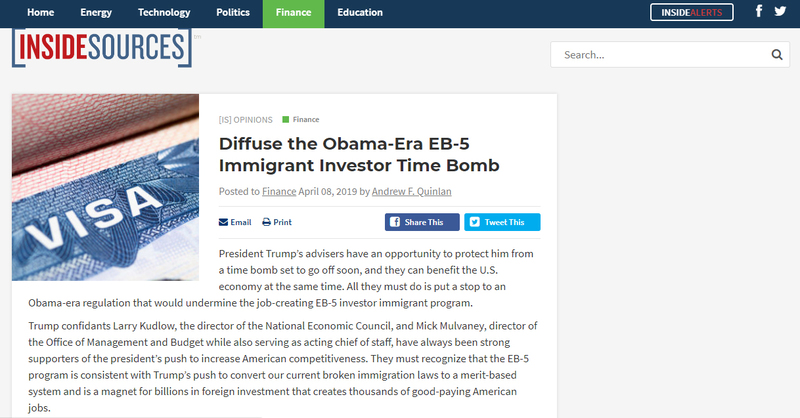 President Trump’s advisers have an opportunity to protect him from a time bomb set to go off soon, and they can benefit the U.S. economy at the same time. All they must do is put a stop to an Obama-era regulation that would undermine the job-creating EB-5 investor immigrant program.

Trump confidants Larry Kudlow, the director of the National Economic Council, and Mick Mulvaney, director of the Office of Management and Budget while also serving as acting chief of staff, have always been strong supporters of the president’s push to increase American competitiveness. They must recognize that the EB-5 program is consistent with Trump’s push to convert our current broken immigration laws to a merit-based system and is a magnet for billions in foreign investment that creates thousands of good-paying American jobs.

During his recent State of the Union address, Trump offered as one of his signature ad-libs that he wants immigrants to come “in the highest numbers ever,” with the stipulation that they do so legally. To some this statement might have come as a surprise, but it’s in keeping with the president’s distinction between immigration that he considers detrimental — including illegal immigration, chain migration, and the diversity lottery program — and the merit-based approach he prefers.

The EB-5 investor immigrant program fits neatly into the latter camp. And key advisers to the president, like Mulvaney and Kudlow, have similarly long been supporters of merit-based immigration. In his role at OMB, Mulvaney also has the power to protect the president’s interests and send the regulation back to the Citizenship and Immigration Services where it originated.

It’s not even necessary to share the rest of the president’s immigration views to appreciate EB-5’s benefits.

The fundamental purpose of the EB-5 program is to make America an attractive destination for mobile investment funds. Many of the world’s most successful individuals are nevertheless trapped in countries that lack our nation’s essential liberties and want a way out. America is just one of many nations competing for these individuals, which EB-5 accomplishes by offering up to 10,000 permanent resident visas per year, a fraction of the more than 500,000 immigrant visas granted annually, for those who invest in the U.S. economy and create American jobs.

A new coalition letter warning against enactment of the Obama regulations from 15 free-market organizations, led by the Center for Freedom and Prosperity, spelled out the program’s benefits: “The EB-5 program has attracted a significant amount of foreign investment to the U.S. to date. A study from the American Action Forum found the program increased foreign investment in the United States by $20 billion since 2008. A 2017 Department of Commerce report similarly found that the EB-5 program increased investment in the U.S. by $5.8 billion in 2012 and 2013 alone. Using data from FY12-FY13, these projects were expected to create an estimated 174,039 jobs for American workers.”

Additionally, the benefits come not just from the influx of investment, but also the types of projects it funds. Thanks to EB-5 investments, projects otherwise overlooked by traditional financing are being successfully completed and leading to urban renewal.

Unfortunately, these benefits are now in jeopardy. A last-minute regulation from the Obama administration is still winding its way through the regulatory process and threatens the viability of the program. In fact, the uncertainty it is creating is already doing damage as investors begin to look elsewhere to more hospitable nations.

Rather than undermining the EB-5 program, it should be expanded and made more efficient. A huge backlog currently discourages many investors from the program, while bureaucrats are wrongly limiting its potential by counting family members against the 10,000-visa cap despite Congress’ original intention for it not to work that way. Fixing these problems requires Congress to step in, but in the meantime regulators can refrain from making things worse.

The Trump economy has experienced solid growth thus far, and a large reason is the competitive improvements made to the tax code that have caught the United States up to the rest of the world when it comes to reducing burdens on business investment.

But that’s not enough. There should be no question that the United States is the premier destination for investment regardless of the source, be it business or individual, and the EB-5 program is an integral component of that strategy. The Trump administration shouldn’t let his predecessor’s lack of appreciation for merit-based immigration thwart that objective.

The misuse of "TEA" resulted in the eb-5 program losing its role as an incentive for funds to flow to areas that really needed help. Even for the selfish interests of the industry, the big real estate developers in New York should not use the political differences between President trump and President Obama to provoke and mislead the American public, which will only make the American public more disgusted with this dirty industry and investors more disappointed in the reform!