‘Our country is full’: Donald Trump says migrants are straining US system as he visits border wall 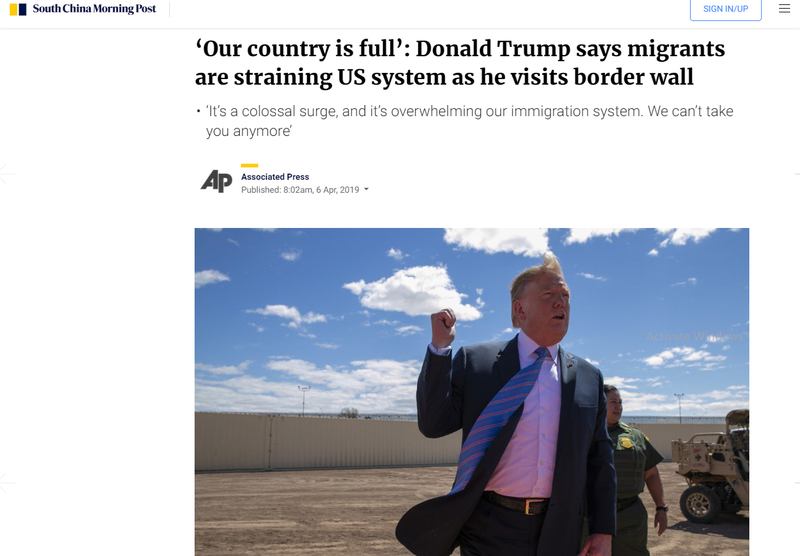 US President Donald Trump visits a refurbished section of the border wall with Mexico in Calexico, California, on Friday. Photo: AP

Declaring “our country is full”, US President Donald Trump on Friday insisted the US immigration system was overburdened and illegal crossings must be stopped as he inspected a refurbished section of fencing at the Mexican border.

Trump, making a renewed push for border security as a central campaign issue for his 2020 re-election, participated in a briefing on immigration and border security in Calexico before viewing a 2-mile (3.2km) see-through steel-slat barrier that was a long-planned replacement for an older barrier – and not new wall.

“There is indeed an emergency on our southern border,” Trump said at the briefing, adding that there has been a sharp uptick in illegal crossings. “It’s a colossal surge, and it’s overwhelming our immigration system. We can’t take you anymore. Our country is full.”

As Air Force One touched down in the state, California and 19 other states that are suing Trump over his emergency declaration to build a border wall requested a court order to stop money from being diverted to fund the project. But Trump, who ratcheted up his hard-line immigration rhetoric in recent weeks, declared that his move, which included vetoing a congressional vote, was necessary.

Also on Friday, House Democrats filed a lawsuit preventing Trump from spending more money than Congress has approved to erect barriers along the southwestern border. Congress approved just under US$1.4 billion for work on border barricades. Trump has asserted he can use his powers as chief executive to transfer an additional US$6.7 billion to wall construction.

Trump, who earlier in the week threatened to shut down the border over the high numbers of migrants trying to enter the US, appeared to walk back his comments Thursday. He said Friday that it was because Mexico had gotten tougher in stopping an influx of immigrants from moving north. 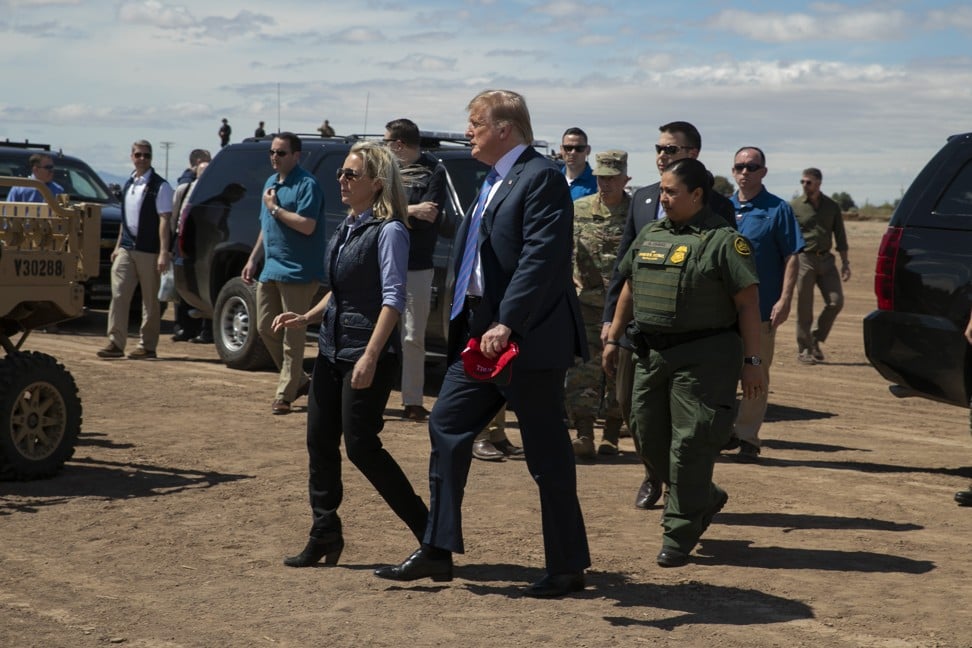 US President Donald Trump walks with Homeland Security Secretary Kirstjen Nielsen as they visit a newly refurbished part of a border wall with Mexico in Calexico, California, on Friday.

“Mexico has been absolutely terrific for the last four days,” the president said as he left the White House. “I never changed my mind at all. I may shut it down at some point.”

The president’s visit came a day after he withdrew his nominee to lead US Immigration and Customs Enforcement. Long-time border official Ron Vitiello appeared to be cruising toward confirmation, but Trump said Friday that he wanted to go in a “tougher direction.”

Trump, as he so often does, mixed fact with fiction when warning of the threat at the border. When complaining about the so-called Flores legal settlement that governs treatment of migrant children and families, he blamed “Judge Flores, whoever you may be”. But Flores was an unaccompanied 15-year-old girl from El Salvador. Supporters of US President Donald Trump stand near the US-Mexico border during a rally as Trump visits Calexico on Friday.

He also downplayed the claims of people seeking asylum at the border, declaring without evidence that many are gang members while comparing some of their efforts to find safety in the US to special counsel Robert Mueller’s investigation of Russian interference in the 2016 elections.

As the president showed off the renovated section of the barrier to reporters, a balloon