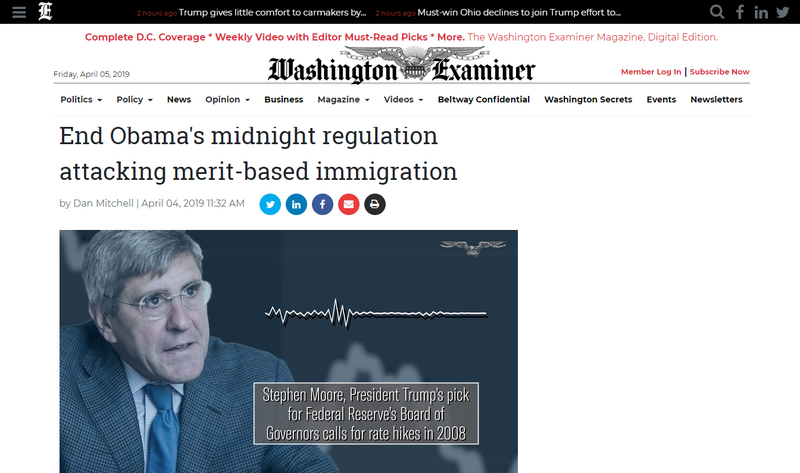 The rancor in Washington over how to deal with illegal immigration is understandable given conflicting attitudes about labor markets, rule of law, crime, and other issues. What’s harder to understand, though, is why anyone would object to merit-based, legal immigration.

There is a sizable wing of both parties that is hostile to merit-based programs, even though they can both help grow the US. economy and create new jobs. The EB-5 investor visa program, for instance, brings in billions in investment while creating thousands of jobs for Americans in need of work.

The EB-5 program allows foreign-born investors to pledge a certain amount of cash for domestic projects that will result in the creation of American jobs in exchange for permanent resident status. That’s the good news. The bad news is that this program was not favored by the Obama administration. And so in the waning days of former President Barack Obama’s tenure, he started the process of promulgating a regulation that would sabotage the program.

The Trump administration has not stopped this “midnight regulation,” despite President Trump's support for a merit-based approach.

Numerous pro-market groups have signed on to a letter to the Trump administration urging them to kill this Obama-era regulation. Grover Norquist of Americans for Tax Reform, Andrew Quinlan of the Center for Freedom and Prosperity, my group, and a number of other prominent pro-merit-based immigration groups make the case to the acting White House budget director that the U.S. Citizenship and Immigration Services “is proposing to dramatically increase the financial burdens placed on EB-5 investors and would raise these amounts to levels that far exceed those that have been proposed and are under consideration by Congress.” These are decisions that clearly are in the domain of legislation and should be dealt with by Congress, not through executive rulemaking.

Although the program is capped at 10,000 people, and family members of investors are currently (erroneously) counted toward that cap, there exists a demand in the U.S. for investor visa resources to fund new projects. The letter cites the American Action Forum statistics that found “the program increased foreign investment in the United States by $20 billion since 2008. A 2017 Department of Commerce report similarly found that the EB-5 program increased investment in the U.S. by $5.8 billion in 2012 and 2013 alone. Using data from FY12-FY13, these projects were expected to create an estimated 174,039 jobs for American workers.” Those numbers speak to the idea that this program is a merit-based immigration success story.

One of the problems with the regulation is that Congress is abdicating its responsibility to make law in this space. Just as Republicans complained about Obama expanding power and undermining the separation of powers, the same is true about this proposed regulation that will remake the law during the Trump administration.

Current Trump administration officials understand the need for Congress to pass laws while supporting the idea of merit-based immigration proposals. Trump’s current chief of staff and Office of Management and Budget Director Mick Mulvaney has been a consistent supporter of merit-based immigration proposals, as has the director of the National Economic Council, Larry Kudlow. They understand that the EB-5 program is unique in that there is no case of its visa holders competing with Americans for jobs, traditionally the political obstacle for other immigration programs. Furthermore, there is no legitimate fear that these wealthy visa holders and their family members would ever become wards of the state.

The EB-5 visa program promotes America as an attractive destination for foreign investment with the result that foreign investors come to the U.S. to create American jobs. When they invest, they are insourcing foreign cash into large infrastructure projects that benefit people living in the cities hosting those projects. Instead of restricting the program, the Trump administration should expand it to incentivize wealthy foreigners to create jobs while bringing needed billions in investment to American projects. It's a program worth preserving, consistent with an “America First” economic policy because it creates American jobs while increasing foreign investment in the U.S. economy.

Dan Mitchell is Chairman of the Center for Freedom and Prosperity.

NYU Stern School of Business Report:
"The political agenda of those who make these predictions is obvious. Repeatedly, EB-5 proponents intentionally mischaracterize the regulations as
“Obama-era” regulations.
However, there is no evidence that the reform of the EB-5 Program (the “Program”) or the elimination of TEA abuse was a priority, or even a focus, of President Obama. If the regulations should be labeled, the“Grassley-era regulations” would be more appropriate.

As the industry is well aware, then Chairman of the Senate Judiciary Committee, Charles Grassley (R-IA), an ardent supporter of President Trump and a foe of President Obama, was the driving force behind these regulations. After the first EB-5 reform bill failed at the end of the December 2015, Senator Grassley, at the first Committee hearing on EB-5 reform in February 2016, repeatedly pressed the U.S. Department of Homeland Security to issue regulations addressing TEA reform and other important aspects of the EB-5 Program in case legislative reform continued to stall.

In response, USCIS announced in April 2016 that it would be issuing proposed regulations, but it was not until January 2017, after soliciting input from a broad base of EB-5 stakeholders, that the regulations were issued. Senator Grassley’s joint letter with Senator Patrick Leahy (D-VT) dated March 11, 2019 to DHS and OMB reaffirms their unwavering leadership in urging that the final regulations be issued promptly. The letter also reiterates their fervent hope that Congress will act to correct the fraud and abuse pervading the Program."

As stated in the report, the misuse of "TEA" resulted in the eb-5 program losing its role as an incentive for funds to flow to areas that really needed help. Even for the selfish interests of the industry, the big real estate developers in New York should not use the political differences between President trump and President Obama to provoke and mislead the American public, which will only make the American public more disgusted with this dirty industry and investors more disappointed in the reform!