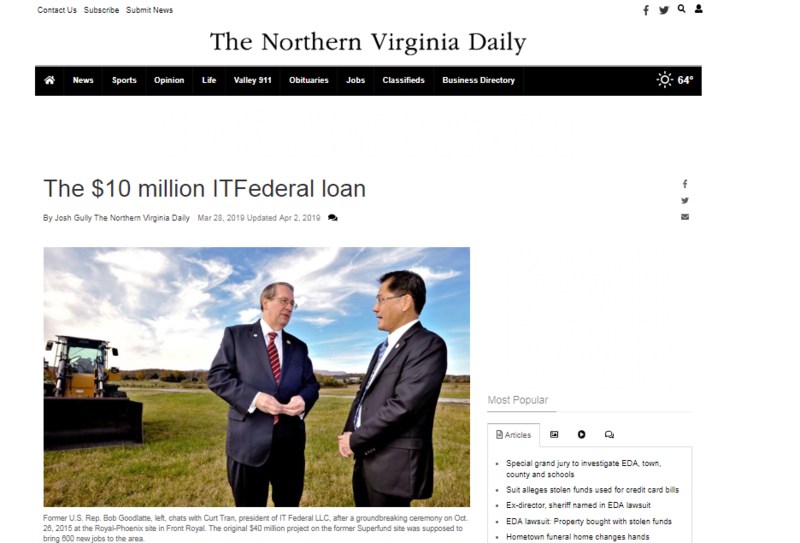 A civil lawsuit filed by the Front Royal-Warren County Economic Development Authority states that former EDA director Jennifer McDonald and ITFederal developer Curt Tran used “all or a portion” of a $10 million loan for “their own personal benefit.”

The case filing states that in 2014, McDonald, on behalf of Tran, expressed to the Town of Front Royal and the EDA an interest in developing a portion of the Avtex Superfund site off Kendrick Lane.

Tran proposed developing about 30 acres of that site, with plans calling for a $40 million multi-building office complex that would include a data center, office space, retail locations and more. It was supposedly going to bring 600 jobs to the area.

According to previous reports, the project was publicly announced in 2015 by former U.S. Rep Bob Goodlatte, R-Roanoke. McDonald said at the time that Goodlatte introduced the ITFederal project to the EDA. An October 2015 groundbreaking ceremony was held at the site, which McDonald previously said was Goodlatte’s idea.

“You put the difficulties behind you with the aim of convincing your citizens and the greater region that this place can once again be a good location for business to thrive," Goodlatte said at the ceremony.

A 10,000-square-foot building remains under construction. Tran recently said that ITFederal will not open at the location and plans call for another business to open there.

In September 2015, the Town Council granted a short-term $10 million loan to the EDA for the ITFederal project. The EDA gave that $10 million to Tran, and the filing states that no evidence suggests that the EDA had the ability to “approve, invoice or otherwise control or direct those funds.”

The filing states that “little to no proceeds” of the loan were used on the ITFederal project, and that the loan was given to Tran, even though McDonald told the town, county and EDA multiple times that Tran is a “high-net worth individual” whose companies had procured a $140 million contract with the Nuclear Regulatory Commission and that he did not need financial assistance. The filing adds that the actual payments of federal contracts to the company do not appear to be more than $5,000 over the last five years.

“Tran and McDonald stated that Tran did not need the financial support of the town and Warren EDA, but that such assistance was requested by Rep. Goodlatte,” the filing states.

The EDA repaid the town through a $10 million loan from the Winchester-based First Bank Trust and Co. The collateral for that loan is 117 acres of land at the Avtex site. According to previous reports, Tran is reimbursing the EDA with monthly payments of $42,160 and has not yet missed a payment. EDA Attorney Dan Whitten previously said the EDA expected this to also be a short-term loan.

The filing states that websites for three companies - ITFederal, V.D.N. Systems and ACRC - with which Tran is associated “all appear to be bogus” and “created to convey a false impression” that the companies were “active businesses with a substantive source of income with the intent of fraudulently inducing the Warren EDA to make the ITFederal loan.”

The filing states that there is no evidence the companies had the capacity to support a $40 million project.  It also states that McDonald provided the EDA board with information “that presented a positive financial impression” of the three companies but nobody was allowed to make copies of the information nor was anyone "permitted to otherwise verify its accuracy or completeness.”

The filing states that "McDonald represented to the EDA that such a curious and incomplete review was adequate and acceptable due diligence in such circumstance.”

The filing states that those “fraudulent representations” led the EDA to sell 30 acres to ITFederal for $1. A contract between ITFederal and the EDA states that the company must make a $2 million investment at the site and construct a 10,000-square foot building. If that does not happen by September 2020, the EDA will retain the land and be owed $2 million minus whatever investment has been made.

The filing states that McDonald authorized several payments totaling $392,248 to vendors relating to the ITFederal project and that an unauthorized $1.4 million was paid directly to ITFederal, which she represented as drawing on the $10 million loan that was given in full to ITFederal. The filing states that McDonald "deliberately" gave EDA funds to Tran with "no reasonable expectation" that they would be repaid and that she "personally benefited from such payment."

The filing further states that although McDonald and Tran both previously said that ITFederal was an EB-5 visa project, which provides green cards to foreign investors who make a $1 million investment in economically distressed areas, there is no evidence such financing was ever obtained to fund the project.