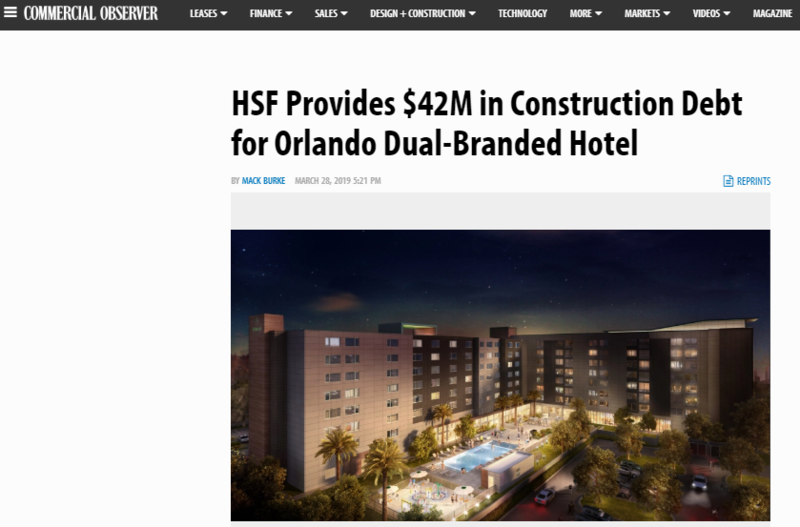 Hotel construction lender Hall Structured Finance has provided $41.8 million to fund AD1 Global’s construction of a project in Orlando, Fla. that will house two branded hotels, according to information provided by Hall.

“This fantastic project will be ideally located near all major area attractions,” said Meridian Capital Group’s Noam Kaminetzky, who arranged the financing for the project. “Meridian, AD1 Global and HSF worked closely to structure a deal that provided up to 75 [percent] loan-to-cost, non-recourse senior debt, allowing the sponsor to then layer in EB-5 capital, minimizing their equity in the deal.”

The first-lien construction loan to Hollywood, Fla.-based developer AD1 Global, will erect a building that will house both a 144-key Aloft Hotel (a chain owned by Starwood Hotels & Resorts Worldwide) and a 140-room extended-stay Element Hotel (part of Marriott International). The building is supposed to open in the fourth quarter of 2020.

The development is located at the corner of Central Florida Parkway and International Drive, southwest of Orlando’s downtown and within a six-mile radius of five of the world’s top 10 most visited theme parks, including SeaWorld Orlandoand Discovery Cove. The hotel will sit just a few miles west of Walt Disney World Resort.

“Orlando is the most visited city in the United States, and this new hotel will be located in the center of the area’s top tourism destinations,” Mike Jaynes, the president of Dallas-based Hall Structured Finance, said in a prepared statement. “Its ideal location, coupled with other factors including the Marriott [and] Starwood loyalty program, strong development team and modern, upscale amenities, made this a perfect fit for our loan program.”

The two brands at the hotel will share an outdoor pool with a game area, a fire pit and grills, a fitness studio, a bar in the lobby, a business center and roughly 4,000 square feet of conference space.

Hall was the industry’s top non-bank hotel construction lender last year, according to Real Capital Analytics. This deal marks the firm’s 10th in Florida, the last being a Hampton Inn & Suites in the town of Riverview, located just outside of Tampa Bay.

The firm has closed nearly $100 million in hotel construction loans in the first three months of this year, expecting to surpass $400 million by year’s end.

AD1 Global could not immediately be reached for comment.