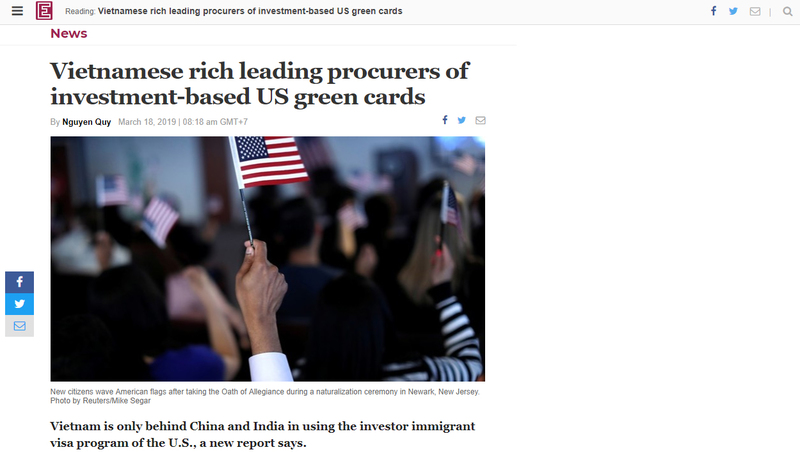 New citizens wave American flags after taking the Oath of Allegiance during a naturalization ceremony in Newark, New Jersey.

Vietnam is only behind China and India in using the investor immigrant visa program of the U.S., a new report says.

Rich Vietnamese people are the most interested in taking advantage of the EB-5 visa program, which allows foreigners to invest in job-creating business or real estate projects in the U.S. in return for obtaining a green card to become lawful permanent residents, the Wall Street Journal reported.

Data from the U.S. Immigration Fund reveal that the number of Vietnamese nationals issued EB-5 visas climbed to 693 last year, a 47 percent increase from 2017, ranking the country the third fastest-growing market in the world for the U.S. immigrant investor visa program after China and India.

Just four years ago, Vietnam made up only 1 percent of all EB-5 visas granted by the U.S. government.

The EB-5 visa program has attracted growing interest from rich Vietnamese people in recent years. Under the program, entrepreneurs, their spouses and unmarried children under 21 are eligible to apply for a green card (permanent residence) if they make the necessary investment in a commercial enterprise in the U.S., and plan to create or preserve 10 permanent full-time jobs for qualified U.S. workers.

Under the program, there are two minimum qualifying investment rates: $1 million as the general rate, and $500,000 for investors in a high-unemployment or rural area in the U.S., according to the U.S. Citizenship and Immigration Service.

About 10,000 EB-5 visas are issued each year, of which 85 percent go to Chinese nationals, the Washington Post quoted federal data compiled by Invest in the USA, an EB-5 trade association, as saying. Vietnam, India, Brazil, Taiwan, South Korea, Iran and Venezuela follow as the next-largest contributors.

Data from the U.S. Census Bureau show nearly 1.3 million Vietnamese citizens have migrated to the U.S. since the end of the Vietnam War and obtained green cards.

According to the International Organization for Migration, nearly 100,000 Vietnamese people leave the country each year to live in a more developed nation.

The trend is apparent in the growing number of Vietnamese investors moving overseas and wealthy families deciding to emigrate, despite the higher costs of living, cultural differences, language barrier and complex visa requirements. The U.S. has become the top choice with many wishing to chase the American Dream.

It usually costs wealthy Vietnamese people between $3 million and $7 million to apply for permanent residency in the U.S., according to Chris Loc Dao, chief executive of U.S. Immigration Services company.

He said that over the past 10 years, the company has managed to advise more than 100 Vietnamese individuals on making investments worth a combined $1 billion in the U.S in exchange for green cards.

Unofficial statistics suggest that affluent Vietnamese may have invested between $10 billion and $20 billion a year through immigration programs like the U.S.’ EB5 Immigrant Investor Program.

Vietnam ranks fourth among the world’s top 10 countries with the fastest millionaire population growth, according to the latest report from wealth research firm Wealth-X.