Six-fold surge in GCC approvals for US scheme offering citizenship 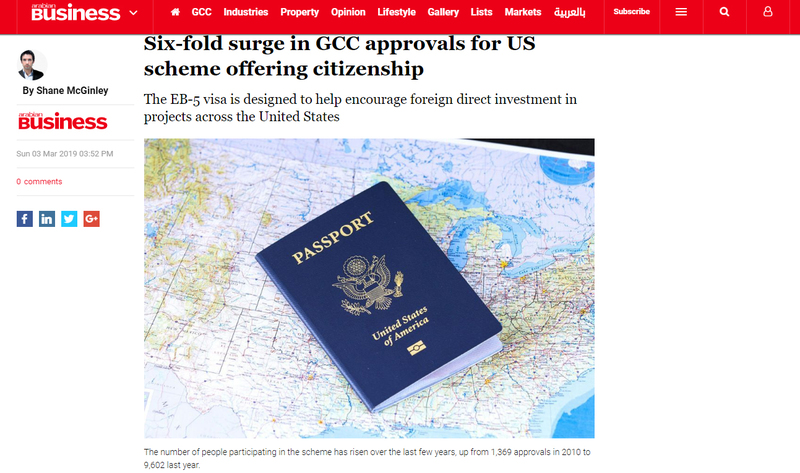 The number of people participating in the scheme has risen over the last few years, up from 1,369 approvals in 2010 to 9,602 last year.

The number of Gulf residents approved to take part in an American scheme offering the chance to earn citizenship in return for a minimum investment of $500,000 surged nearly six-fold last year, according to official data.

The EB-5 visa for Immigrant Investors was created by the US Immigration Act of 1990 as a way of encouraging foreign investment in projects across the United States.

For a minimum investment of $500,000 investors can apply to be part of the scheme, which can lead to a green card and the chance of full American citizenship after five years.

According to the official data from the US Citizenship and Immigration Services, the number of people participating in the scheme has risen over the last few years, up from 1,369 approvals in 2010 to 9,602 last year. The maximum number of participants is currently capped at 10,000.

While China dominated the list, with 4,642 approvals issued – or 48.3 percent of the total – 54 residents from the United Arab Emirates were approved, a 350 percent increase year-on-year compared to 2017.

“We have had no rejections, they have all been approved and some of the families have already moved to the US,” Shai Zamanian, an attorney at Step America, a Dubai-based firm which offers the EB-5 visa scheme, told Arabian Business in a phone interview on Sunday.

“Our approvals have come in quicker. Before it could take about a year and half, but now it is about a year. The fastest approval was a recent Egyptian family, which took about ten months,” he added.

The firm has seen increased interest in the EB-5 scheme from residents from the UAE and wider Gulf area since Donald Trump became president in 2017.

“We have had a sharp increase a month into him taking office as people saw the closed manner in the way he spoke about the Middle East and immigration,” Zamanian said, adding that the fact that the unemployment rate in the US hit a 49-year low last year has helped boost interest.

“When Trump came into power, the US employment rate was its lowest in history. The reason for this is that companies in the US are now forced to hire domestically. So, all the channels of working and residing in the US have been closed or are now closed or in the process of closing,” he said.

“The EB-5 programme is the one programme which is still open and approvals are coming more quickly. It is the soundest and quickest way to receive residency and ultimately a passport. People who would have applied for other programmes are forced to look at the EB-5 programme.”

Trump’s own company has been linked to the EB-5 scheme in the past. Bloomberg reported in 2016 that $50 million was raised from Chinese EB-5 applicants for a Trump-branded apartment building in Jersey City.

“[Trump] is well aware of the programme and has used the programme to fund some of his Trump-branded towers in the US so we sense that the programme is not going to go away,” Zamanian said, despite pressure from within Congress to increase the minimum amount required from $500,000 to around $800,000.