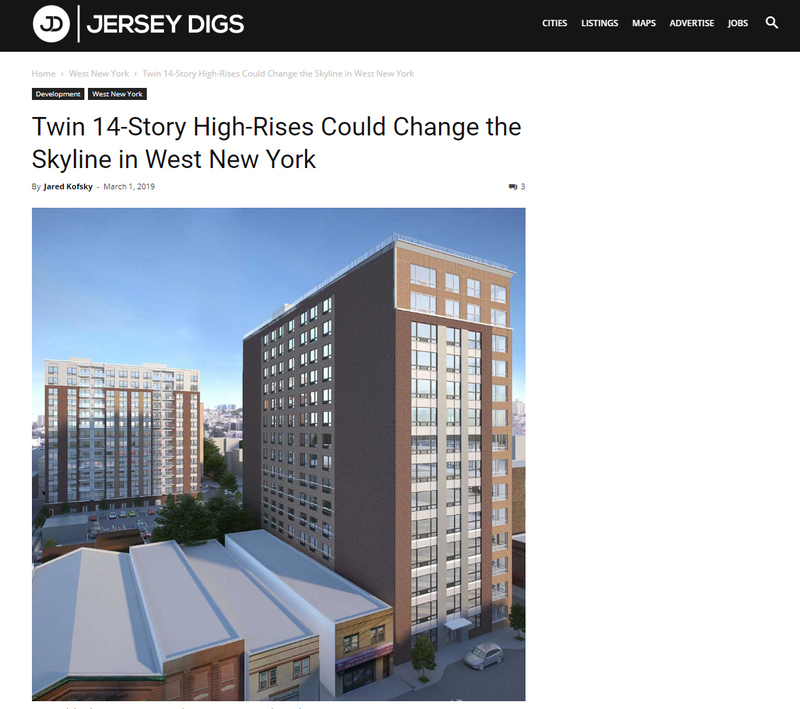 While most of the larger development projects in West New York in recent years have been constructed along the Hudson River, the town could soon see two high-rise buildings be developed atop the Palisades near the Bergenline Avenue corridor.

Information posted on the website of Secaucus-based National Realty Investment Advisors (NRIA) reveals plans for two 14-story towers on three neighboring properties in the Hudson County community. Each development would include 162 apartments, according to NRIA’s NR Living page. Both projects are listed as EB-5 developments.

NRIA is also behind the Bergenline Station Apartments development proposal in West New York that we reported on earlier this month.

The first of these two new buildings would be constructed at 511-513 52nd Street between Bergenline Avenue and John F. Kennedy Boulevard. This rental development would include covered parking along with a meeting room, a gym, and what is described as an “entertainment roof deck.”

The second development is slated to be built a few yards away at 508 51st Street, which is also situated between Bergenline Avenue and John F. Kennedy Boulevard. The NR Living page mentions that this building would also feature an “entertainment roof deck” with skyline views along with a gym, meeting rooms, and party rooms with kitchens.

Currently, the properties contain public surface parking lots. NJ Parcels data shows that the three tracts are owned by the West New York Parking Authority. However, the NR Living site states that in regards to the 508 51st Street development, “we are purchasing the property directly from the City of West New York” and that “the council favors it to include a 15 to 20-year tax abatement.”

Records from the West New York municipal government show that back in February 2018, the town’s Board of Commissioners designated the West New York-based Culver Development Company as the redeveloper of all three properties. At the time, there were reportedly plans for a 175-room hotel and 156-unit apartment building along with a restaurant and public parking structure. The designation was renewed in June 2018 and October 2018, though there is no mention of a hotel on NRIA’s websites.