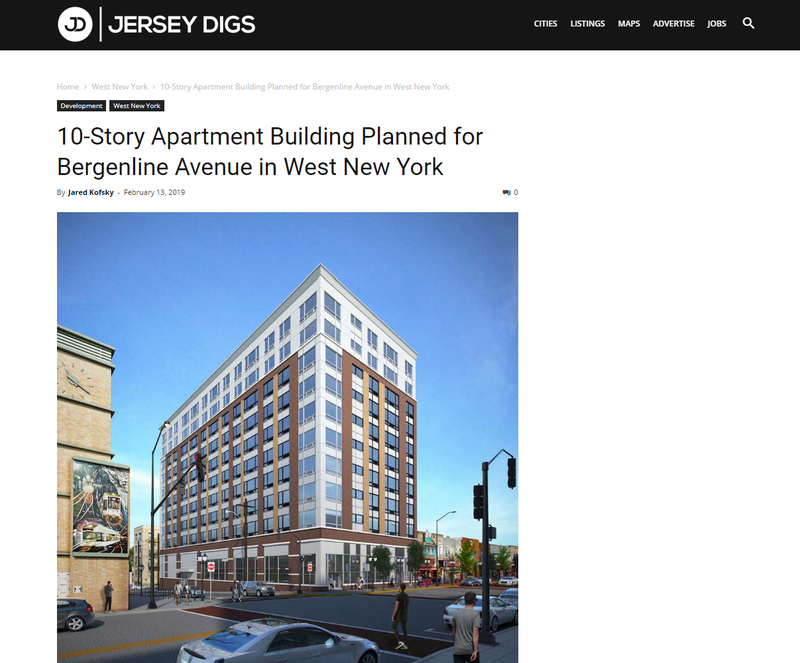 A new $49 million development could be built along a major Hudson County thoroughfare just steps from a busy transportation hub.

While the property at 4901 Bergenline Avenue in West New York contained a one-story commercial building for decades, the tallest building in the immediate vicinity is now being proposed for the site. The premises are located directly across 49th Street from the Bergenline Avenue station, the only underground stop on the Hudson-Bergen Light Rail, and are very close to the Union City and North Bergen borders.

A recent flyer from Secaucus-based National Realty Investment Advisors (NRIA) features renderings of the project and states that this proposed mixed-use development is expected to include 97 apartments. The flyer markets the Bergenline Station Apartments as an EB-5 project, mentioning that of the $49 million estimated cost of the project, 11.2 percent is expected to come from foreign EB-5 capital while 79.6 percent is slated to be financed through a construction loan. The remaining portion of the costs would be funded by the developer.

Construction is expected to last for around two years, according to the timeline in the flyer. 43 of the units are expected to contain one bedroom while the remaining 54 would have two bedrooms each. The pricing of the units is not mentioned in the flyer. There would also be a lounge and fitness center for residents along with 54 underground parking spaces.

Over the years, the longtime building on the premises has been home to a Home Discount Center, a flea market, and a Duane Reade. The proposed development would include 12,200 square feet of retail and commercial space on the ground floor. While the flyer mentions that T-Mobile and PSE&G have letters of intent in place for two of the spaces, it adds that there are “continued conversations with Starbucks” for the third retail space.

An LLC registered out of NRIA’s Secaucus address has owned the property since last year, according to NJ Parcels. A report from Avison Young states that the site had been sold in 2018 for $15 million.

This project might not be the only development in store for the neighborhood. NJ Parcels records show that an anonymous LLC paid $2.5 million last year for a property just a block away at 4803 John F. Kennedy Boulevard in North Bergen, but that company’s plans are not yet known.