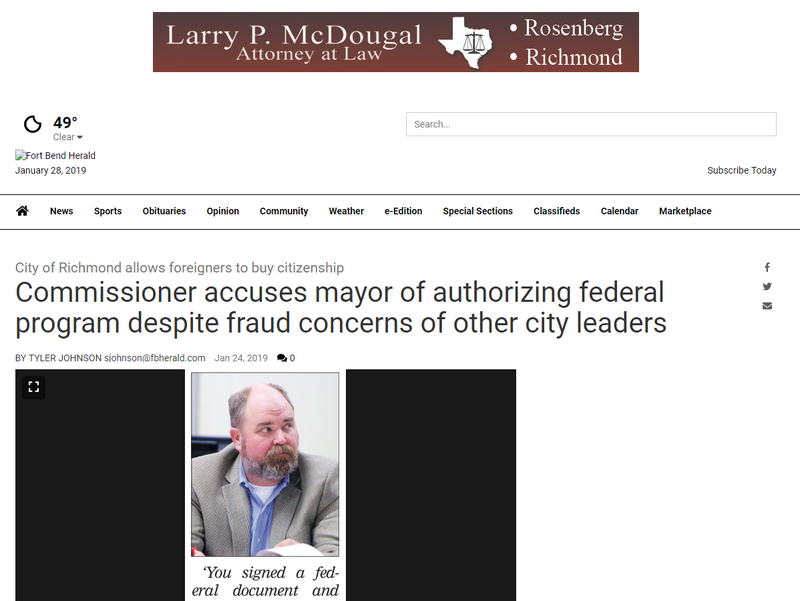 During Tuesday’s city commission meeting, Richmond Mayor Evalyn Moore was confronted about signing a federal document last fall without the consent of the commission.

Commissioner Josh Lockhart brought it to his colleagues’ attention during a discussion about adopting the official city map. He said that on Oct. 3, Mayor Moore signed an EB-5 document, which is an immigrant investor visa program that was created by the Immigration Act of 1990.

“That wasn’t brought to this commission,” Lockhart said, adding that the program is known to be “laced with fraud.”

According to Lockhart, EB-5 is a citizens and immigration services grant that targets employment area for Richmond and allows foreigners United States citizenship if they invest at least $500,000.

According to City Manager Terri Vela, businesses in the program are required to add 10 jobs to the local economy. Lockhart also said the EB-5 grant program “covers almost half of the city limits.” Since the official map was the topic of discussion, there was a copy of the map displayed on two monitors and Lockhart asked the mayor if she could point out the areas in Richmond that are incorporated in EB-5.

“You signed a federal document and you don’t even know where it is?” Lockhart questioned.

He produced a copy of the EB-5 document Moore signed and asked if she would like to take a look at it to refresh her memory.

“Do you know?” Lockhart questioned again.

“Yes, I do know. I’m not going to do (show you),” Moore said, contradicting her earlier response.

Lockhart then asked the mayor if she could explain why she signed off on the EB-5 grant without consulting commission members, but Moore declined. Lockhart then asked Commissioner Barry Beard, who serves as mayor pro tem, if he had any knowledge about EB-5 and if he voiced his opinions about it with the mayor.

“I knew it was out there,” Beard said, stating that he did talk about it with the mayor and voiced his concerns about fraud when dealing with EB-5.

Lockhart asked Beard what Google said about EB-5 and Beard said it was laced with fraud. Lockhart turned to Vela and asked if she had a discussion with the mayor about EB-5.

“We discussed it and I laid out my concerns about creating an EB-5 for the city of Richmond,” she said.

Lockhart emphasized that Mayor Moore heard the strong concerns from Beard and Vela, but signed the document anyway.

“It was my right,” Moore said.

“Can we move on, please?” Moore said.

Lockhart agreed, but first he wanted a map from the city’s website to be brought up on the screen to show the audience the area of Richmond covered by EB-5.

“EB-5 is not on our website because we do not promote it,” Vela said.

“Why don’t we promote it?” Lockhart asked.

“Because we’re concerned with the ramifications of having it,” Vela responded, citing fraud and safety issues.

“But the mayor signed it and the city is concerned about?” Lockhart asked.

Later, Lockhart said he wanted the city staff to provide a copy of the signed document and a map of the area affected to be included at the next city commission meeting.