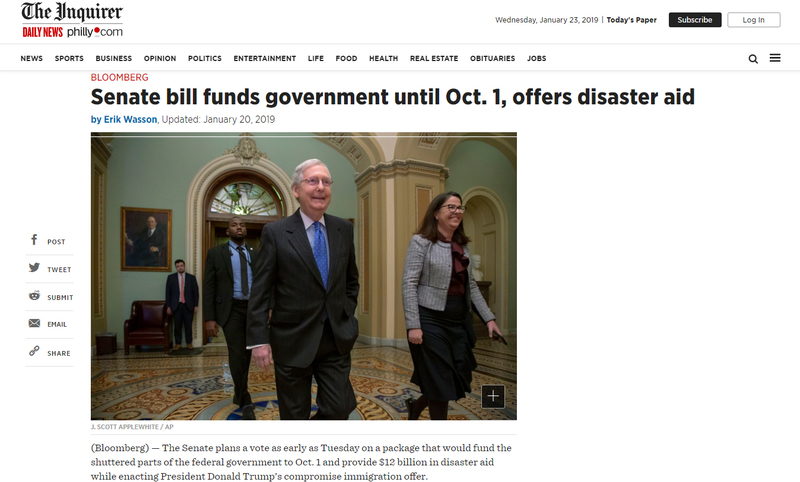 The Senate plans a vote as early as Tuesday on a package that would fund the shuttered parts of the federal government to Oct. 1 and provide $12 billion in disaster aid while enacting President Donald Trump’s compromise immigration offer.

The bill is based on seven full appropriations bills already worked out between bipartisan House and Senate negotiators, according to a document obtained by Bloomberg News. In an enticement to Democrats, the amount of disaster aid mirrors an increased House Democratic level rather than the $7.8 billion that House Republicans put forward last year.

Trump outlined an immigration offer on Saturday that would provide three years of deportation relief and work authorizations for about 700,0000 young undocumented immigrants who previously received relief from former President Barack Obama’s Deferred Action for Childhood Arrivals programs, as well as a three-year extension of stays for those in the country under Temporary Protected Status.

The bill would establish a process for would-be Central American migrants to apply for U.S. asylum in their home countries, while automatically denying asylum requests from applicants inside the U.S. without authorization. It would extend expiring programs including the Violence Against Women Act and EB-5 investor visas.

Senate Majority Leader Mitch McConnell will attempt to amend a House-passed spending bill with the text of the new legislation on Tuesday, according to a source familiar with the plan. If he cannot get consent from Democrats to do that, the vote on the bill would be pushed to Thursday, the source said.

The vote would come just before about 800,000 federal workers are set to miss their second paychecks on Friday from the shutdown, now in its fifth week. The House also plans votes this week on a package containing six of the same seven spending bills.

Included in the package is $5.7 billion for a border wall, which Democratic leaders have said makes it unacceptable.

Republicans hope to peel off just enough minority Democrats to clear the 60-vote threshold required for passage of most legislation in the Senate. Republicans control just 53 seats.

The Senate package would fund the departments of Homeland Security, Agriculture, Commerce, Justice, State, Interior, Treasury, Transportation, and Housing and Urban Development, as well as other closed agencies such as the Environmental Protection Agency and Food and Drug Administration.

Passage of the bill would complete the 2019 spending cycle, allowing lawmakers to start talks on budget caps for next year and the debt ceiling as well as a potential broader immigration deal that Trump has talked about.

House Democrats are also attempting to release their own more expansive border security plan for votes this week in the form of an updated Homeland Security spending bill.a