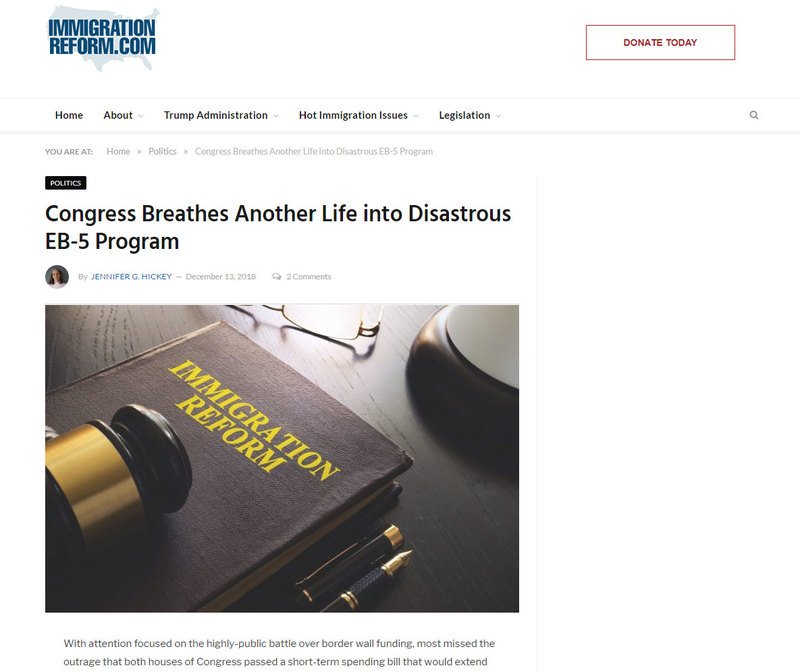 With attention focused on the highly-public battle over border wall funding, most missed the outrage that both houses of Congress passed a short-term spending bill that would extend the life of the EB-5 visa program until December 21.

In short, the investor visa program makes immigrant visas available to wealthy foreigners who invest or are seeking to invest at least $1,000,000 in a new commercial enterprise. While created with the intention of spurring domestic economic growth by luring foreign investment, the program has fallen woefully and dangerously short of expectations.

According to Senate Judiciary Committee Chairman Chuck Grassley, his committee has sent more than 30 oversight letters raising the alarm about “various vulnerabilities” in the program. Just this week, a group of developers in the Houston area settled with the Securities and Exchange Commission after they were accused of fraudulently using $20.5 million that had been provided through the program.

They are not once-in-a-blue-moon examples of fraud. According to a 2015 Government Accountability Office (GAO) report, “[U.S. Citizenship and Immigration Services] officials noted that fraud risks in the EB-5 Program are constantly evolving, and they continually identify new fraud schemes.”

Foreigners fraudulently obtaining green cards or Americans defrauding foreign investors is certainly a problem, but worse is the potential for foreign governments and terrorist organizations to use it to conduct economic espionage and money laundering.

As hard as it may be to imagine, the “visa for sale” scheme could get worse.

Today, foreign investors do not even have to build or sustain their own businesses. They just need to give money to others. Thanks to an illogical and lengthy court ruling, foreign nationals may be able to borrow the money.

In a ruling issued November 30, D.C. Federal District Judge Emmet G. Sullivan found USCIS’s policy of treating loan proceeds as “indebtedness” that must be obtained with the investors’ personally-owned capital and that in rejecting the applications of the foreign investors behind the lawsuit, USCIS was acting in an “arbitrary and capricious” manner.

The decision opens the door even wider to the potential for fraud and exposes another visa program that should have died years ago and likely will live on when Congress considers a longer-term spending measure next week.

“I would call it business as usual, the program will remain alive, it will be extended again,” said Ronald Fieldstone, a partner at Miami’s Saul Ewing Arnstein & Lehr.

If Congress cannot even reform a program that both political parties and several government watchdogs believe needs it, what faith should any American have in Congress and the administration to bring about true immigration reform?