What is Jared Kushner 'Shielding' ? Watchdog granted court order for DHS to disclose any role he played in renewing EB-5 Visa Program 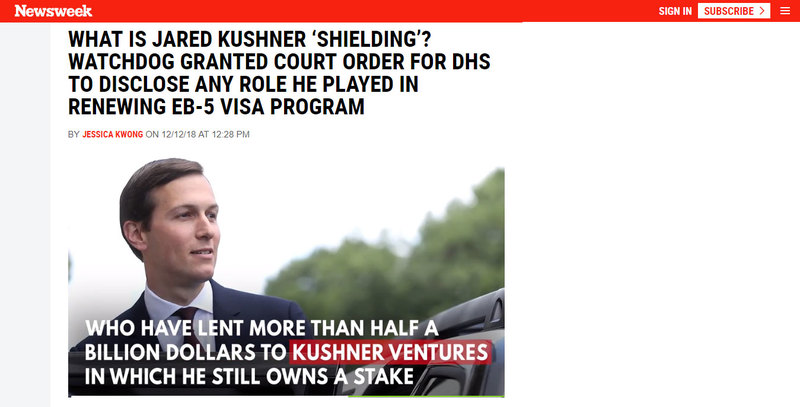 Jared Kushner, senior White House adviser, sits in a county sheriff listening session with President Donald Trump (not pictured), in the Roosevelt Room of the White House, on February 7, 2017. A watchdog group filed a public records lawsuit for information on any involvement Kushner had in the Trump administration’s reauthorization of the EB-5 visa program.

A judge has ordered the Department of Homeland Security to send a representative to a hearing on the status of a public records lawsuit the watchdog group Democracy Forward filed against the Trump administration. The lawsuit centers on a request for documents that could disclose any possible involvement President Donald Trump’s son-in-law, Jared Kushner, had in renewals of the EB-5 investor visa program.

The order was granted Monday after various agencies refused to provide documents by the deadline last Friday under the Freedom of Information Act lawsuit.

“We filed the FOIA lawsuit to understand ties between the Kushner family in relation to EB-5, to understand if strings were pulled. We want to understand whether he was involved in reauthorization of the program, which he [and his family] clearly stood to benefit from,” Democracy Forward senior counsel Josephine Morse told Newsweek on Tuesday.

“Bottom line: What could he be shielding?” Morse said of Kushner, who serves as a senior White House adviser.

Democracy Forward sued the Trump administration in February after the Department of Homeland Security, State Department and U.S. Citizenship and Immigration Services failed to disclose Kushner’s involvement in repeated renewals of EB-5, amid media reports of federal investigations into the Kushner family's potential abuse of the program.

The EB-5 program provides green cards to immigrants who invest at least $500,000 in businesses in the United States that create 10 or more jobs per investor.

Last year, the U.S. Securities and Exchange Commission and New York federal prosecutors subpoenaed Kushner’s family business, Kushner Companies, for information on developments it financed in part through EB-5. The investigation includes attempts by Kushner Companies to present projects in New Jersey as EB-5 investments to get funding from Chinese investors.

Shortly before the subpoenas, Kushner’s sister Nicole Meyer led a marketing campaign in Beijing and Shanghai seeking Chinese investors for Kushner Companies' One Journal Square project in New Jersey. The marketing materials stated that up to 300 individuals who invested $500,000 each could be eligible for green cards through EB-5, The Wall Street Journal reported.

Democracy Forward, which filed its FOIA request in May 2017, has grown suspicious about the agencies’ delay in producing the documents.

“The amount of dragging and shifting stories about documents and whether we’re going to get them,” Morse said, “We’re wondering if there’s a cover-up and how Kushner was involved with the reauthorization of the EB-5 program.”

Morse said the court ordered the Department of Homeland Security to have a phone call with her and that said she would be more than happy to converse with a department representative “to get to the bottom of what’s happening here.”

“It’s just a constant pushback with no real explanation as to why, which obviously piques our interest even more,” Democracy Forward spokeswoman Charisma Troiano told Newsweek.

Troiano later said that Democracy Forward received a late-night communication Tuesday from the Department of Homeland Security contradicting past statements about the amount of responsive documents available.

"Our attorneys are reviewing to determine our next steps," Troiano said.

“The Government is ORDERED to bring in a Department of Homeland Security representative who is prepared to discuss the status of Plaintiff's request, the number of documents pending processing, and anticipated production dates,” the judge’s order states.

What kind of reporter and what kind of news publication publishes an article about a lawsuit without specifying the court?