Miami's Luxury Real Estate Market Is Heating Up, Thanks To Big-Name Architects And Foreign Money 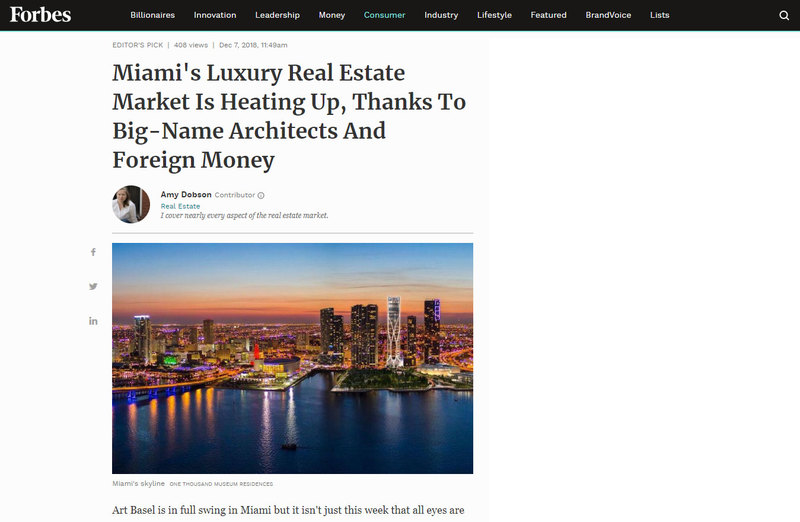 Art Basel is in full swing in Miami but it isn't just this week that all eyes are on the city. Luxury high-rise developments, designed by some of the biggest names in architecture, have seen a surge in growth over the past ten years and there doesn't seem to be any sign that demand is slowing down. There is already the Renzo Piano building with the most expensive penthouse on the market (asking $68 million). Zaha Hadid designed the One Thousand Museum Residences, where prices start at $5.8 million up to $21 million. Jean Nouvel is bringing Monad Terrace, where prices range from $1.7 million to $12 million (with native Bougainvillea and Passion Vines climbing the exterior walls), to the city. Bjarke Ingels, Antonio Citterio, Rem Koolhaas, Piero Lissoni and Richard Meier are even more impressive names to add to the list. 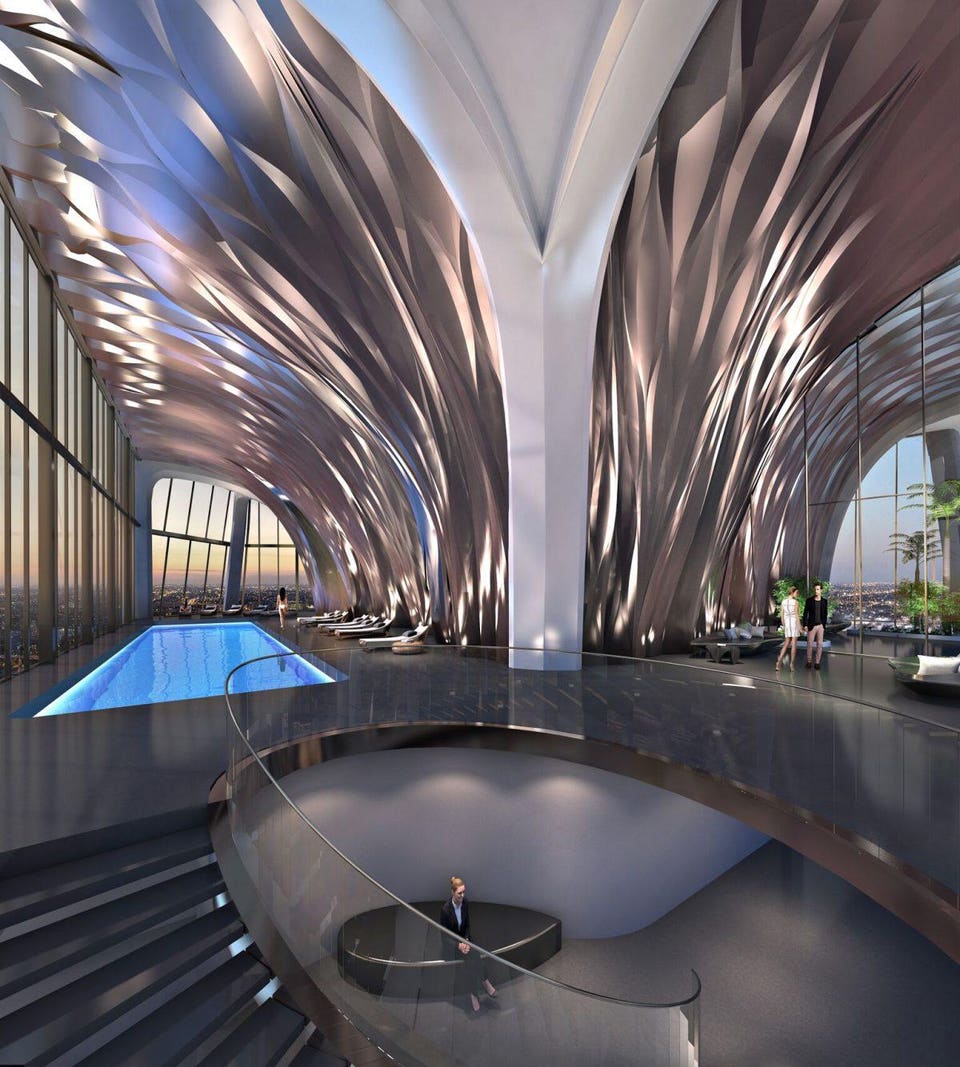 "The simple challenge of imprinting an architectural mark on Miami’s skyline is not enough to justify why the city has attracted so many master architects," says Miami real estate agent Geane Brito of Compass.

"What is really attractive about Miami is its promise to target larger humanistic issues such as climate change, historic preservation, sustainability and the need for public spaces, all within the context of the individuality and multiculturalism which is a mark of this town. Miami is in many ways the American city of the future, a lab of concrete ideas, and who would not like to be part of its architectural DNA?" 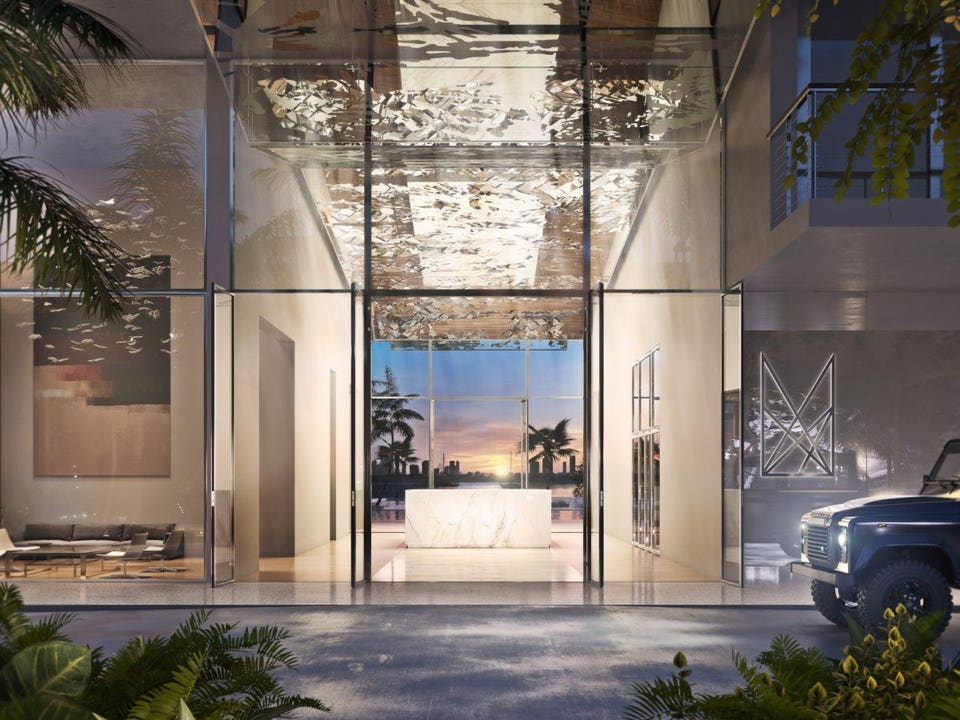 Monad Terrace by Jean Nouvel is designed to glow like a paper lantern at night.

Miami has found itself at the perfect intersection of having a location and climate that attracts wealthy clientele and inspires the architectural greats, while also being a a city that still has available vertical space to accommodate these buildings. Additionally, the lucrative EB-5 visa program, detailed below, has funneled many millions into the city's changing skyline.

"Miami is experiencing an architectural and design renaissance that is fueling major sales success in the luxury condominium market," says Susan de França, president and CEO of Douglas Elliman Development Marketing. "As a truly global city rich in culture, that is home to Art Basel Miami Beach, one of the greatest art fairs in the world, it is only natural that the demand for architecturally significant homes become more and more germane to the story of Miami."

The chart below from the appraisal firm Miller Samuel shows the steady rise in prices for Miami Beach as the number of sales has decreased, but notice how the prices have a sharper rate of increase than that of the decrease in the number of sales (starting roughly around the middle of 2016 when we see the drop off in sales but prices starting to go up). 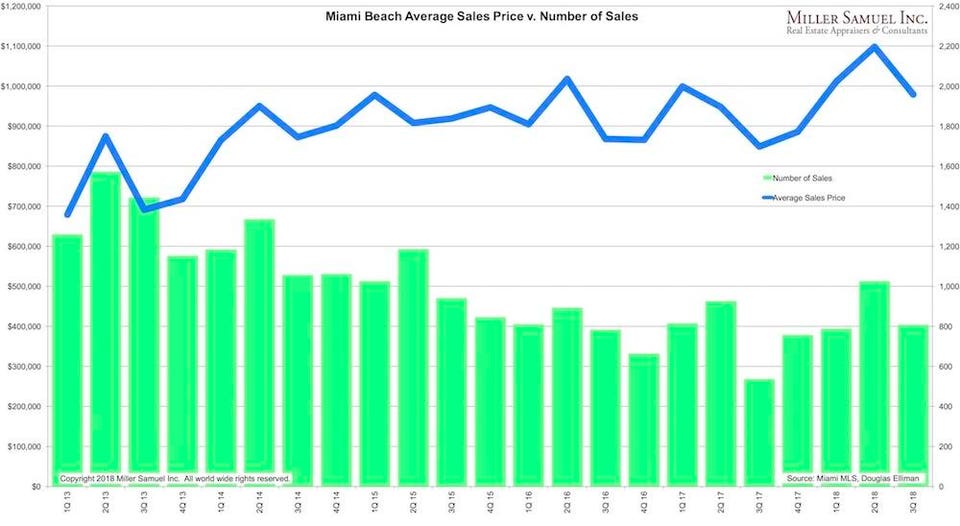 All this couldn't happen without an influx of earnest money and that's where the EB-5 visas come in. Foreign nationals who invest a minimum of $500,000 in a U.S. project that will create at least 10 long-term jobs can receive a visa and green card (as long as the project reaches completion). Not only does pre-purchasing a condo before a building is built count as investing in the project, it also helps secure construction financing for the remainder of the cost since the developer can show the bank a certain percentage of the units already have a buyer. This is a big part of what is fueling the growth of this segment of the luxury market.

According to this Miami Herald article, the latest data available show funding for Florida projects generated from EB-5 visas grew from $10.5 million in 2011 to $150.5 million just two years later in 2013. As just one example, remember the new building with a landing pad for flying cars? That's the Miami Worldcenter and it has received over $50 million in financing from buyers looking to obtain EB-5 visas.

But the EB-5 program is hotly contested in the U.S. Senate. It has received several extensions and was was due to expire today, December 7, but the vote has been pushed back another two weeks (citing the change in Congress' schedule due to the death of former president George H. W. Bush). It largely came into play when domestic financing dried up after the Recession, but even though the housing market has recovered, there will still be a large gap to fill should EB-5 no longer be an option.

Even existing buildings are being scooped up. Architect Piero Lissoni was brought on board to take an architecturally preserved building from the 1920s, formerly used as the Miami Heart Institute, and turn it into the Ritz Carlton Residences. This is his first full-scale residential project in the U.S. Since no more than 50% of the building was allowed to be demolished, developers had to go to great lengths to make the project work. A steel exoskeleton was installed to facilitate fabrication of 22 new cores and many of the pilings, sitting 10 to 14 feet under water, had to be replaced. This added huge expense to the project, but was still deemed worthwhile given how profitable even just one luxury condominium is right now on the Miami market. The project will bring 111 condos and 15 standalone villas to the city.

Of course the surrounding neighborhoods are holding on to the coattails of this activity and investors are getting in on the action before those neighborhoods take off, too. For example, APEX Capital Realty, a commercial brokerage focused on emerging markets, has just acquired two warehouses in the Little River neighborhood near Miami Beach that it plans to turn into flexible business space concept. But instead of building them out for offices, APEX plans to keep the interiors in a loft style/open format to accommodate all the diverse business that they expect to seek large square footage in an emerging neighborhood: art galleries, e-commerce businesses, recording studios, tech companies, entrepreneurs and, of course, they can also be turned into offices. Leasing is expected to be priced at $19 per square foot.

"As I take out buyers from around the world to visit these amazing projects there is definitely an intellectual pause," says Brito. "It is not just a calculation of price per square foot. Such pause may have been sparked by the architectural pedigree at first, however, it sustains itself during the purchase process because Miami luxury buyers look beyond brand. They are looking at the dialogue of old and new, nature and design, how the property will deal with sea level rising and how they will fare in generations to come. There is a sense that one is not only buying a resort condo, but a piece of humanity, that happens to have fabulous views, magical light, specialized services and over-the-top amenities which may include a park, helipad or private beach club. It’s Miami after, all."