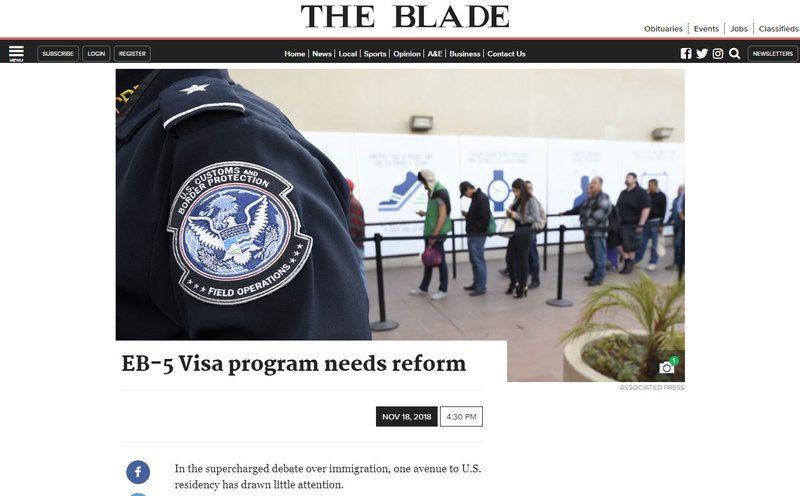 In the supercharged debate over immigration, one avenue to U.S. residency has drawn little attention.

It’s called the EB-5 visa program — and it’s for foreigners with deep pockets who can buy their way in to the country. Congress has been urged to reform parts of the program, but it ought to consider scrapping the whole thing, partly out of fairness to other would-be immigrants and partly for national security reasons.

Iowa Sen. Chuck Grassley, the Judiciary Committee chairman, told President Trump that the program “is riddled with fraud.” L. Francis Cissna, director of U.S. Citizenship and Immigration Services, warned Congress that “reforms are needed” to prevent foreigners from investing “for the purpose of laundering money or conducting espionage against us.”

If their applications are accepted by the federal government, the investors, their spouses and dependent children are granted U.S. residency, bypassing would-be immigrants trying to enter the country via lotteries, asylum or other visa programs.

Congress created the EB-5 program in 1990 to leverage foreign investment for domestic economic growth. In 1992, it amended the program to allow the foreign money to go into investment groups called “regional centers.” Foreign investors don’t have to create or sustain their own businesses, just give their money for projects assembled and managed by others.

There are 903 pools nationwide, including 18 in Ohio and 85 in Pennsylvania. One of them notes that the program “is said to be the quickest and easiest form of obtaining a U.S. visa,” and another calls it a “direct route to a green card.”

It would be enough to end the program merely because it gives wealthy foreigners an immigration advantage denied those of lesser means. On top of that, however, are many other concerns, including whether the regional centers generate the kinds of projects and jobs Congress intended.

In a letter to Mr. Trump, Mr. Grassley complained that the initial goal of helping capital-starved communities has been “eroded” by “big-moneyed Manhattan interests.” He didn’t cite examples. However, a review of regional center projects shows that while some involve manufacturing and infrastructure, others consist of high-end residential and commercial real estate deals offering few obvious economic benefits to poor, rural enclaves.

EB-5 money should be building more factories in under-served areas and fewer hotels and townhomes in metro areas.

More troubling are allegations of illegal activity, including kickbacks and fraud, in some projects and Mr. Cissna’s assertion that he lacks the tools to conduct tougher audits of investment groups, quickly shut down groups for national security reasons, and keep criminals and spies out of the program.

At the very least, Congress owes Mr. Cissna the means for robust oversight. But maybe it’s time for the entire EB-5 program to go. It should be something more than a mechanism for wealthy investors to buy visas and developers to plug holes in their financing plans.