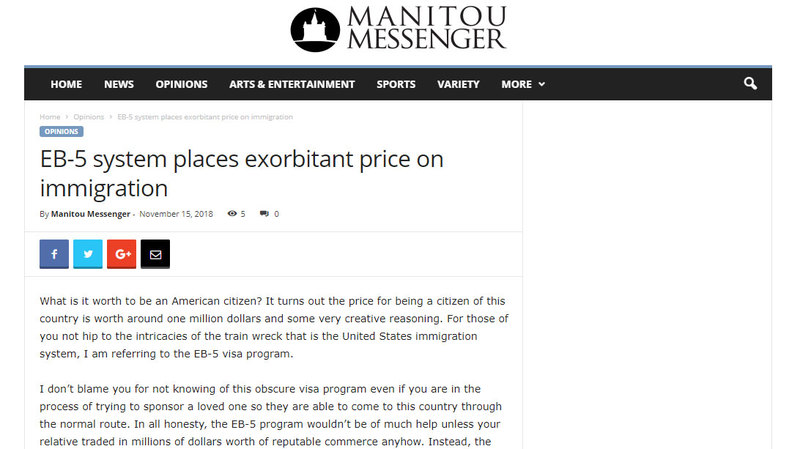 What is it worth to be an American citizen? It turns out the price for being a citizen of this country is worth around one million dollars and some very creative reasoning. For those of you not hip to the intricacies of the train wreck that is the United States immigration system, I am referring to the EB-5 visa program.

I don’t blame you for not knowing of this obscure visa program even if you are in the process of trying to sponsor a loved one so they are able to come to this country through the normal route. In all honesty, the EB-5 program wouldn’t be of much help unless your relative traded in millions of dollars worth of reputable commerce anyhow. Instead, the EB-5 is the proverbial golden ladder that allows the exorbitantly wealthy to jump the line past the common immigrant.

The EB-5 program isn’t all bad: it helps wealthy foreign investors get a foothold in the American market while also creating jobs and investing in projects throughout the United States. Or at least it was supposed to.

When the EB-5 was first conceived in 1990,  it was determined that to qualify, an applicant would have to prove two things – a minimum of $1 million investment in a domestic market project and 10 jobs created by said project. These two core requirements give some credence to the idea of giving wealthy investors a little special treatment in exchange for an influx of capital and more domestic jobs. The EB-5 program seems like a simple enough process that, at face value, would improve the economy. However, like all things touched by the US government, the program just doesn’t work.

“WHAT IS IT WORTH TO BE AN AMERICAN CITIZEN? WELL, IT TURNS OUT THE PRICE FOR BEING A CITIZEN OF THIS COUNTRY IS WORTH AROUND ONE MILLION DOLLARS AND SOME VERY CREATIVE REASONING.” – JAVIER LOPEZ JR. ’21

In 1992 the second requirement of EB-5 eligibilty was given the good old-fashioned “trickle-down economics” treatment. Applicants were no longer required to create 10 solid jobs, but instead could make the argument that the influx of their investment money could create 10 jobs in the surrounding commerce. This could simly include the McDonald’s down the street hiring a few more workers to compensate for the increased amount of construction workers in the area. These jobs don’t have to be tangible positions that can be confirmed, as long as the logic given seems sound enough for the person reviewing their application.

Of course, why shouldn’t the rich be given preferential treatment over the hundreds of thousands of prospective immigrants going through the normal application process that can take anywhere from one month to 10 years to complete? Why wouldn’t we allow foreign investor funnel money into private organizations on the premise of a few hypothetical jobs?

All in all, the EB-5 program is just another worm in the can that is the United States Immigration Service that proves freedom is free, but you can pay an extra $1.99 to get freedom+ with 2-day shipping.