Another EB-5 Scandal, a Toppled Ferris Wheel, and a Visa-Grab Court Case 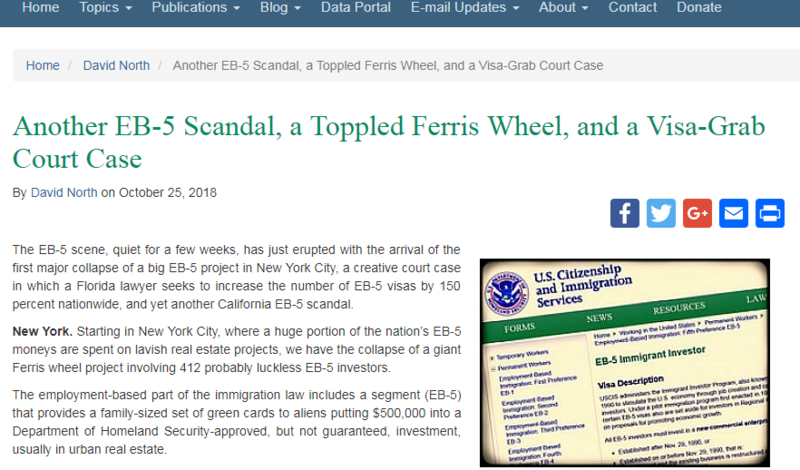 The EB-5 scene, quiet for a few weeks, has just erupted with the arrival of the first major collapse of a big EB-5 project in New York City, a creative court case in which a Florida lawyer seeks to increase the number of EB-5 visas by 150 percent nationwide, and yet another California EB-5 scandal.

New York. Starting in New York City, where a huge portion of the nation’s EB-5 moneys are spent on lavish real estate projects, we have the collapse of a giant Ferris wheel project involving 412 probably luckless EB-5 investors.

The employment-based part of the immigration law includes a segment (EB-5) that provides a family-sized set of green cards to aliens putting $500,000 into a Department of Homeland Security-approved, but not guaranteed, investment, usually in urban real estate.

The plan (or dream) in this case was to erect a huge Ferris wheel on the north shore of Staten Island. It would be surrounded by stores, restaurants, and parking garages; it would lure tourists, and one would see, from the top of the wheel, the Statue of Liberty and Manhattan. It had been in planning for years, but this month the developers called it quits, saying that the City of New York would not provide them with tax-free bonds they said they needed to complete the deal.

Staten Island is the least populous, and least cosmopolitan of New York City’s five boroughs; to reach it from Manhattan one usually takes a ferry, though bridges link it with Brooklyn and drab places in New Jersey (I used to live there) like Bayonne and Perth Amboy. Unlike Manhattan, it needs investment.

While construction on the giant Ferris wheel (it was to be 630 feet high) was not completed, the contractors did erect a couple of large pedestals, bought the parts for the wheel, and built a 950-car parking garage. The EB-5 regional center, CanAm, says that enough investment was made to cause each of the 412 investors to secure their green cards.

I take that statement with a grain or two of salt; 412 EB-5 investments are supposed to produce 4,120 jobs, directly or indirectly. Can you think of a business that creates fewer jobs per million invested than a parking garage, even one attended 24 hours a day? The planning and early stages of construction, however, created some jobs for architects, lawyers, and financial types as well as for some construction workers.

Whether the investors get their green cards or not is, of course, up to USCIS, not the regional center.

While no one has sued anyone yet in this case, I can see the litigation going on for another five or six years.

Florida: EB-5 Visa Ceilings. Speaking of court cases, one of the most imaginative immigration lawyers, Ira J. Kurzban of Miami, has secured an interim ruling in a case (Wang et al. v. Pompeo et al. 1:18-cv-01732) in the District of Columbia’s federal district court regarding how the visa ceiling is to be defined in EB-5 cases, as reported by Law360 (partially behind a pay wall).

As background, there is a ceiling on new EB-5 visas of just under 10,000 a year. It is currently heavily backlogged for EB-5 investors from China. Traditionally, for decades and decades, all visa ceilings have been designed to cover both the principal visa beneficiary (say the brother of a citizen in the family fourth preference) and his spouse and unmarried children under 21.

This is a class action suit, on behalf of a number of similarly situated aliens. Kurzban has apparently argued that the long-used definition is wrong, at least in the EB-5 cases, as the numerical limit should apply only to the principal investors, and thus that the spouses and children should not be counted against the nearly 10,000 ceiling. Should he prevail, this would seem to expand the congressionally stipulated 10,000 to the neighborhood of 25,000, as the average EB-5 petition is for a principal and about 1.5 family members.

According to Law360, district Court Judge Tanya S. Chutkan has ruled "for the ‘sole purpose of resolving’ the class’ motion for a preliminary injunction seeking relief from the State Department’s counting policy" in favor of the provisional certification of the class. This allows the case to move on to dealing with the substance of the dispute.

Preliminary or not, it is a victory for Kurzban, and a setback for those who believe in the social utility of numerical ceilings in the immigration field.

I used the word "apparently" earlier to describe the lawyer’s efforts because, strangely, the court systems’ electronic filing arrangement, PACER, does not allow the reader access to the court documents. This is puzzling and we will check into it further.

Meanwhile, the judge, if only preliminarily, has ruled, in effect, that some visa types are more equal than others.

The interim ruling, in short, says that if you are rich, which is the case with the EB-5 investors, then special arrangements apply to you and your family, but not to other, less-well-financed would-be immigrants. Law360 missed this issue completely. You do not need access to the court documents to figure this out.

California. The least of the EB-5 news this week is that yet another small group of people with Chinese names (Chen, Chen, and Ye in this case), have been charged with fraudulently collecting $10 million or so in commissions from hundreds of presumably Chinese investors who made EB-5 investments in a middleman entity, Golden Gates Regional Center, without being told that one of the Chens and Ye secretly owned the center.

The conspirators were charged with the usual litany of activities, such as self-dealing, back-dating legal documents, and fabricating evidence. This is a civil case, so far, and was filed by the cop on the beat in the EB-5 business, the U.S. Securities and Exchange Commission.