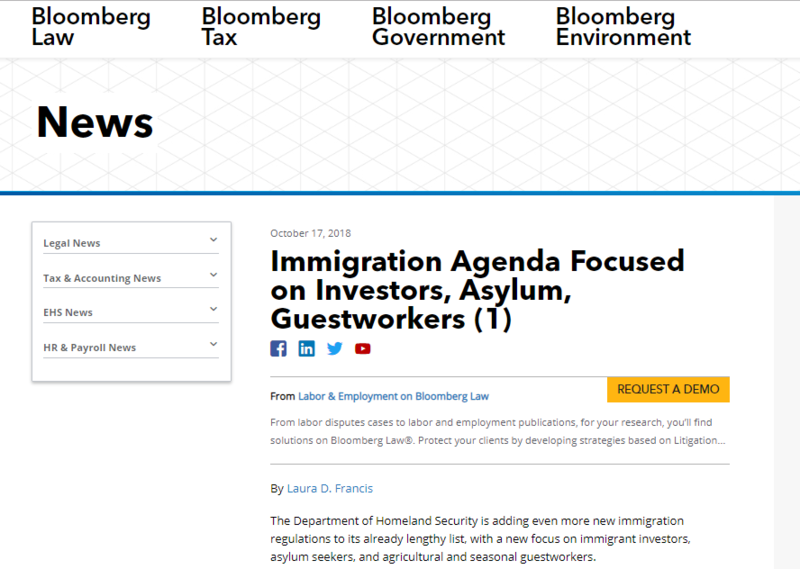 The Department of Homeland Security is adding even more new immigration regulations to its already lengthy list, with a new focus on immigrant investors, asylum seekers, and agricultural and seasonal guestworkers.

The fall 2018 regulatory agenda is ambitious—U.S. Citizenship and Immigration Services, the DHS component handling most employment-based visa matters—hasn’t released many regulations under the Trump administration so far.

But that may be changing. The agency released its “public charge” proposal last week, which would keep immigrants from getting green cards if they’re likely to need public assistance in the future.

Getting that proposed regulation published in the Federal Register was a top priority for the USCIS, which is now freed up to work on the remainder of its proposals.

Other new items in the agenda include a “prerule” seeking public input on changes to the EB-5 immigrant investor program.

The program provides green cards to immigrants who invest at least $500,000 in a commercial enterprise that creates at least 10 U.S. jobs. But it’s come under fire from lawmakers who say the program is rife with fraud and doesn’t actually serve its purpose of funneling money into poor and rural areas.

The Obama administration issued a proposed rule aimed at some of those concerns. In addition to creating anti-fraud measures, the regulation would increase minimum investment amounts and rework the criteria for where immigrants can invest lower amounts.

Finalizing that regulation (RIN:1615-AC07) is still on the agenda, slated for November.

The DHS also plans to make some changes to asylum processing in response to an influx of immigrants at the southern border. One proposed regulation would rework the “credible fear” process, whereby asylum seekers who demonstrate a credible fear of returning to their home countries can’t be deported until their asylum claims are fully processed.

Another proposal is focused on reducing fraud in the process for asylum seekers to obtain work permits. Both proposals are expected in September 2019.