Visa program for wealthy reauthorized: What to know 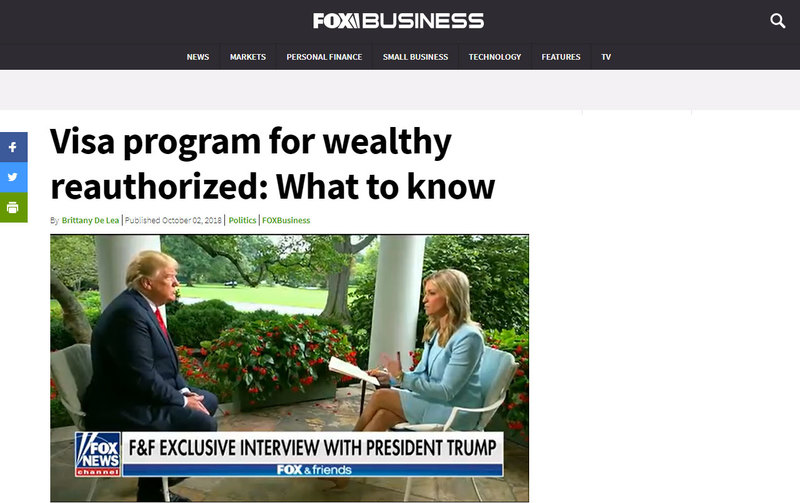 The Trump administration has temporarily renewed a controversial immigration program, which has been deemed the “visas for millionaires” program, until after the midterm elections.

The EB-5 Regional Center program, which awards green cards to foreign nationals who invest at least $1 million in a U.S. business that creates or preserves at least 10 jobs, was scheduled to expire at the end of September. For an individual investing in a rural area, the minimum is $500,000.

The president signed a bill extending the program through Dec. 7 in its current form.

However, many have criticized the program for an abundance of fraud instances and related scandals that have resulted from loopholes.

Among the program’s faultfinders is Republican Sen. Chuck Grassley, from Iowa, who said the “scandal-clad” program “sells” citizenship. While initially intended to help underserved areas, Grassley says the intent has been perverted.

“In the last decade this program has been hijacked by big-moneyed New York City real estate interests,” he said in a speech on the Senate floor in March. “These developers now take almost all the foreign investment from this program, and for the last few years they’ve actively prevented this body from enacting any reforms.”

House Judiciary Committee Chairman Bob Goodlatte has also advocated for the reform of the EB-5 program, saying it is “riddled with fraud and abuse” in its current form.

Democratic Sen. Diane Feinstein of California criticized the program during a congressional hearing earlier this year, saying 4 million people are waiting to legally immigrate to the country, but because they don’t have the cash to “buy their way in, they will continue to wait – some as long as 24 years.” Feinstein added that the EB-5 program lets the wealthy cut to the front of the line.

In the same hearing, Lee Francis Cissna, U.S. Citizenship and Immigration Services director at the Department of Homeland Security, said the program has been used to undermine U.S. national security, drumming up 19 cases of “confirmed national security concerns in five years alone.”

Proponents argue that some instances of fraud are not reason enough to abandon the system entirely, as it encourages capital investment and job creation.

In a study released last year, the Department of Commerce Opens a New Window.  said the program generated $5.8 billion in fiscal years 2012 and 2013, while creating more than 174,000 jobs.

On the one hand, it uses unfair agreements to set all kinds of trap clauses to refuse to allow investors to withdraw funds & try to occupy them permanently. On the one hand, it's problematic to attack these funds & it's not clean. Don't u think you're hypocritical & disgusting?