Millionaires' visas give the wealthy an unfair fast track to a green card. Let's get rid of them 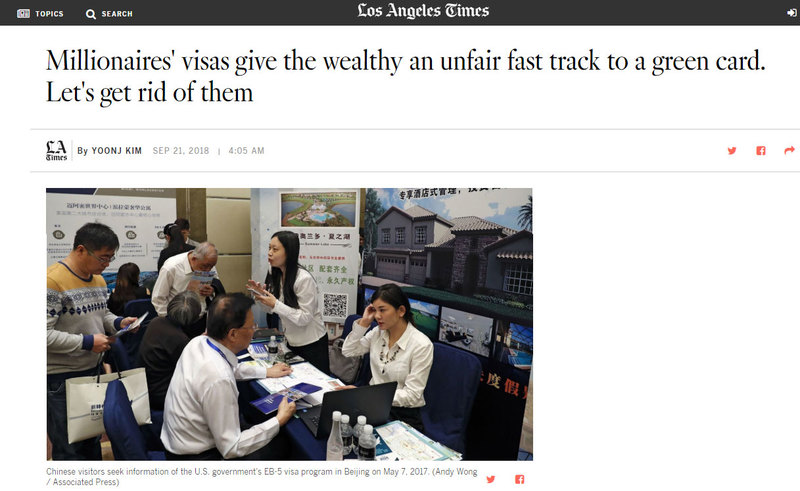 Chinese visitors seek information of the U.S. government's EB-5 visa program in Beijing on May 7, 2017.

While the Trump administration has been dramatically limiting the number of immigrant visas the U.S. will issue, it has been quietly accepting more applicants in one particular category than any other administration over the last decade: the EB-5 Regional Center program, reserved for those who can pay up to $1,000,000 for a green card.

The EB-5 program — or, as I like to call it, the millionaires’ visa — is the only visa for which approval numbers have increased during the Trump presidency. It requires a minimum investment of $500,000 in a U.S. venture within a rural, high-unemployment area, or up to $1 million in a metropolitan region, and the project must create at least 10 American jobs. Successful applicants are granted permanent residency for themselves and immediate family.

The EB-5 program was created with the Immigration Act of 1990, so it’s not new. In fact, my mother’s friend in South Korea applied for an EB-5 in the mid-2000s because she wanted her daughter to get an American education. Within six months, they moved to the East Coast. And within two years, they obtained permanent residency.

By contrast, I came to the U.S. from Seoul with my family through my father’s sponsored visa. He’d worked for 10 years under temporary employment sponsorships while waiting for our green cards, and my mother admitted it was hard not to feel some bitterness.

EB-5’s fast track seemed less objectionable when it existed alongside ample opportunities for the nonwealthy.

But EB-5’s fast track seemed less objectionable when it existed alongside ample opportunities for the nonwealthy. Considering the drastic actions currently being taken against visa-seekers who aren’t unable to fork over half a million dollars, the shortcut looks more like an inequitable loophole. With the program up for renewal on Sept. 30, the administration should do right thing and let it die.

President Trump has drastically reduced the number of admitted refugees, arguably the most vulnerable group of legal immigrants. Last year, he set the overall cap at 45,000 refugees, a historic low. His administration is reportedly considering an even sharper cut for 2019.

Even the so-called genius visas, given to individuals of extraordinary ability (e.g., rocket scientists), have been reduced. In fact, in the quarter following Trump’s “Buy American, Hire American” executive order last April, the denials went up to 8% for these and other employment visas for the highly skilled, compared with 6.2% the previous year. This despite Trump’s calls for more “merit-based immigration.”

These cuts are in line with the administration’s ominous immigration strategies. Last month, reports circulated of a plan to punish legal, tax-paying immigrants for accepting government assistance by making it harder for them to obtain green cards if they accepted noncash benefits, an unprecedented rule. In other words, young students receiving discounted school lunches and working mothers on Medicaid could be deemed unfit for citizenship.

The message is clear: The poor and downtrodden are no longer welcome; the underprivileged are undeserving of a shot at life in the U.S.

Wealthy foreigners, on the other hand, are finding their chances markedly improved under Trump. In 2016, before Obama left office, fewer than 82% of processed EB-5 applications were accepted. A few months later, under Trump, the approvals had jumped to more than 92%.

While the administration restricts immigration across the board, more rich foreigners are purchasing U.S. residency than any other time in recent memory. The American dream is pay to play.

And yet, those who are paying to play don’t necessarily stick around in the long run. Our family friends who came on the EB-5 visa returned to Seoul last spring. The daughter had graduated from Parsons and worked briefly at a respected magazine in New York, but ultimately decided to move back. The venture funded with their visa money is no longer in business.

A disproportionately high amount of EB-5 investment opportunities are subject to fraud. Though the regional investment centers that act as brokers between the U.S. and potential investors are verified by U.S. Citizenship and Immigration Services, the projects themselves are not.

The president’s own family was linked to potential EB-5 violations earlier this year, when the Securities Exchange Commission launched an investigation into Jared Kushner’s companies for attempting to secure low-interest EB-5 investments from China for luxury real estate projects in New Jersey.

If the president truly wants to make America great again, he should want to admit more of the industrious immigrants who made America great to begin with. At the very least, the administration should impose stricter oversight on EB-5 visas and the regional investment centers, and stop exacerbating an increasingly plutocratic immigration system.

After obtaining permanent residency, my parents opened their own business and now employ over a dozen Americans. They are here to stay and give back to the country we call home, like the countless others who worked long and hard for their right to pursue the American dream, regardless of the size of their bank account.