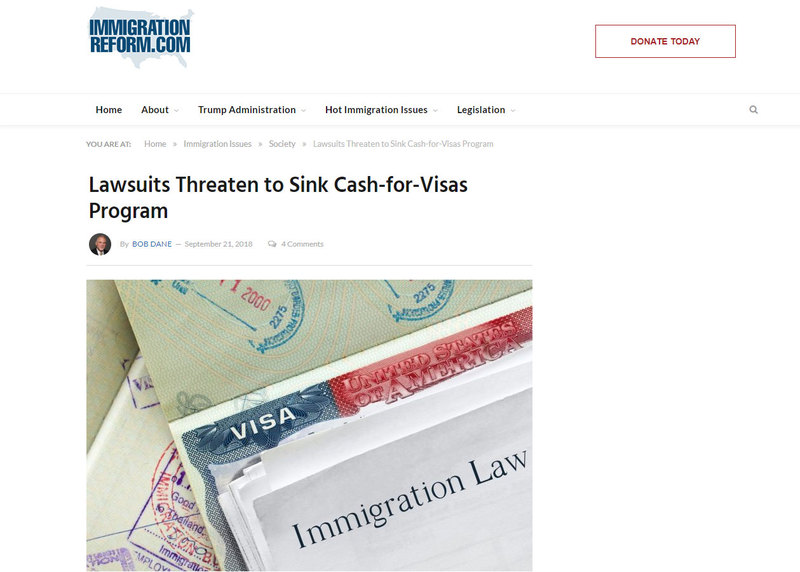 In the latest sign of Capitol Hill dysfunction, Congress will likely grant yet another reprieve to its problem-plagued EB-5 foreign investor-visa program.

Set to expire Sept. 30, the EB-5 “pilot” is a toxic tin can that has been kicked down the road repeatedly over its troubled 28-year history. Attempts at reform have been few and far between.

In July, FAIR quoted the director of the U.S. Citizenship and Immigration Services as saying his agency is unable to effectively supervise or secure the program that grants green cards to foreign nationals who invest in job-creating ventures here.

The Government Accountability Office has found no evidence to verify EB-5’s job-creation claims.

Amid repeated calls from Sen. Charles Grassley, R-Iowa, and others for stricter accounting and deeper background checks to reduce the prevalence of fraud, the EB-5 lobby suggests rearranging deck chairs on the Titanic.

“The real split in Washington comes from proposals to raise the minimum investment thresholds well above $500,000 and restrict the ability of states to draw their own boundaries on what qualifies as an area of true employment need — a practice critics have referred to as ‘gerrymandering,’” one EB-5 insider said.

To use another nautical metaphor, such proposals would do little more than slap a new coat of paint on a rusting hulk.

Litigation by disgruntled investors, many from China, are targeting several EB-5 regional centers that handle the foreign cash. The lawsuits typically claim securities fraud and other securities law violations.

The Department of Homeland Security shut down Vermont’s statewide regional center after a group of investors went to court to allege “the largest EB-5 fraud in U.S. history.” The Securities and Exchange Commission accused the operators of running a Ponzi scheme.

From New York to Virginia to South Dakota to Nevada, EB-5 projects have been embroiled in legal contests. An online search of “EB-5 lawsuits” yields 9,900 results; “EB-5 bankruptcy” nets 1,520,000 hits.

Now the feds are under the gun. A group of more than 450 Chinese EB-5 investors is currently suing the U.S. government to challenge visa policies that keep investors waiting up to 15 years to enter this country.

If Congress will not assert operational control over the program it created – or, better yet, scrap it altogether — the EB-5 experiment may simply be swamped by a rising tide of legal challenges to this cash-for-visas racket.