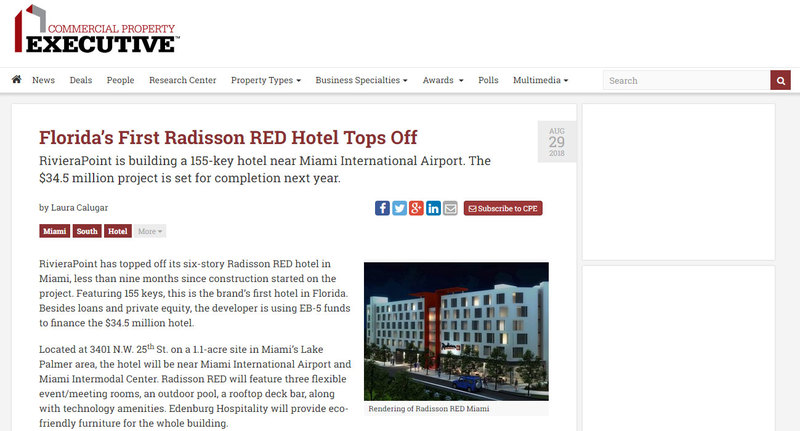 RivieraPoint is building a 155-key hotel near Miami International Airport. The $34.5 million project is set for completion next year.

RivieraPoint has topped off its six-story Radisson RED hotel in Miami, less than nine months since construction started on the project. Featuring 155 keys, this is the brand’s first hotel in Florida. Besides loans and private equity, the developer is using EB-5 funds to finance the $34.5 million hotel.

Located at 3401 N.W. 25th St. on a 1.1-acre site in Miami’s Lake Palmer area, the hotel will be near Miami International Airport and Miami Intermodal Center. Radisson RED will feature three flexible event/meeting rooms, an outdoor pool, a rooftop deck bar, along with technology amenities. Edenburg Hospitality will provide eco-friendly furniture for the whole building.

RivieraPoint—formerly known as Riviera Point Development Group—is using funds from various sources to finance the project. Two months ago, the company secured a $16.5 million construction loan from Centennial Bank. In addition, the developer raised close to $6.5 million in private equity and $11.5 million in EB-5 funds for the construction of Radisson RED.

The Miami hotel is scheduled for completion in the second quarter of 2019. The development will benefit from its proximity to one of the world’s busiest airports, which handled more than 44 million passengers last year.