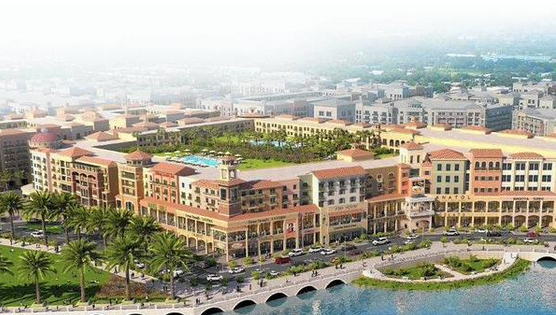 A Central Florida developer has plans for a $150 million community of shops, hotels and condos on 60 acres of lakeside property facing West Colonial Drive in Ocoee.

In April, Ocoee officials approved the preliminary site plan for the project that would ultimately be home to almost 4,000 residents. The initial phase calls for three buildings as tall as 90 feet.

It's one of the more ambitious projects being proposed in Central Florida, and somewhat similar to Uptown Altamonte.

"It's a place where the residents of Windermere and Ocoee could go and hang out and, of course, there will be 1,300 to 1,900 condos and apartments," said Townsend, president of Park Development Corporation. "It's more of a community as opposed to a destination."

Compared with other Central Florida projects, Townsend said City Center West Orange would be more compact than the golf-course-anchored MetroWest and have better highway access than Baldwin Park.

The timetable for City Center West Orange calls for work to start in July on improvements including water and sewer lines. The initial phase would include a 122-room Hilton hotel, 150,000 square feet of shops, 500 condos, office space and a 150-room assisted-living facility, Townsend said.

He expected that phase to be completed by about 2017 or 2018. Two other phases are planned to follow.

What the project has going for it, Ocoee officials say, is a prime waterfront location about half a mile to a mile from state roads 408 and 429 and Florida's Turnpike. Downtown Orlando and the attractions are about 15 minutes away. The land has the necessary government land designations.

Nearby, Ocoee's Health Central Hospital is expanding. In addition, the property is part of an existing tax-increment district that could help pay for road improvements leading to the rural, uninhabited project site.

Residents haven't opposed the project, said Ocoee Planner Michael Rumer. But some, he added, are wary that it could emerge as slowly as the Majesty Building office tower that has been under way for almost 15 years on Interstate 4 in Altamonte Springs.

The challenges for City Center West Orange include getting government funds for new roads and other improvements, Rumer added.

But Townsend said that, even without that city support, the project would move forward — it would just be more costly on the development side.

Most mixed-use projects are bankrolled by deep-pocket equity partners and commercial lenders, but this project would be funded in part by a federal program known as EB-5. It grants visas to foreign investors who contribute at least $500,000 to create or maintain at least 10 jobs in a local economy.

Developers say City Center West Orange will be a jobs machine, creating 4,320 positions and opening up prospects for 430 foreign investors to plow money into the project in exchange for getting visas.

Townsend said his marketing team has targeted overseas investors, primarily from South America and the United Kingdom. He said he has other sources of funding but added that the investments-for-green-cards program makes the project possible.

One of the only other Orlando-area projects supported by the federal EB-5 green card program is StaySky Vacation Club, which is affiliated with Lake Buena Vista Resort.

Larry Cohen, senior vice president of the club, said it just landed its first EB-5 investor after 13 months of working through the process. It's a good additional source of revenue but not much more than that, he said.

"If a developer is counting on the EB-5 sales in order to come out of the ground, it is extremely risky because there are more than 700 approved EB-5 projects in the U.S. and most investors gravitate to proven projects instead of new ones," he said.

Townsend said his team has made inroads with interested investors, many of whom are doctors, lawyers and entrepreneurs intent on the area surrounding Orlando's attractions.

In terms of shops locating there, Townsend said he has retail commitments but no signed leases. The Madison Marquette company, a retail leasing and marketing firm with offices throughout the U.S., is handling that aspect of the project.

In the past, Townsend's projects included multifamily housing in MetroWest and the Waterford Park shopping and office center in Waterford Lakes. That center was completed in 2008 but struggled initially coming out during the recession. It has rebounded in recent years as the economy recovered.