Citizenship for Sale: What Could Possibly Go Wrong? 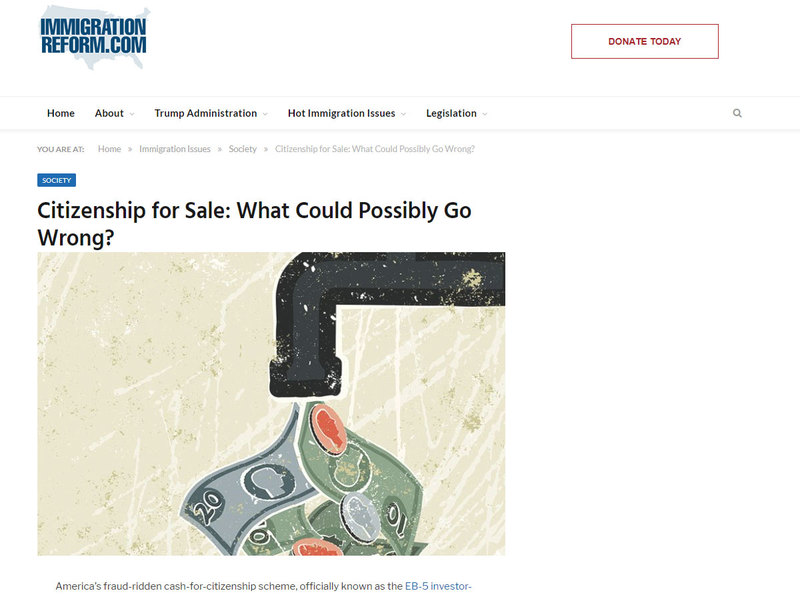 Frank Cissna, director of the U.S. Citizenship and Immigration Services, testified that his agency is unable to effectively secure the program that began as a pilot project 28 years ago.

Does not have statutory authority to terminate a regional center for criminal or security concerns.

Cannot prohibit persons from participating in regional centers and associated commercial enterprises based on their criminal history or civil fraud or securities-related violations.

Is not authorized to tighten regional center reporting, such as requiring certification of compliance with U.S. securities laws, disclosure of pending litigation, details of how investor funds are utilized — or even an accounting of jobs created!

Judiciary Committee Chairman Charles Grassley, a longtime critic of EB-5, said, “In spite of ample evidence of fraud and corruption and national security loopholes, this ‘pilot program’ continues to operate exactly the same way it did [at its beginning].” The Iowa Republican revealed a few recent black eyes:

In May, two companies were barred by the SEC from selling securities after their top officers fraudulently raised $22.5 million in EB-5 capital from Chinese investors. The firms advertised they would use the proceeds to develop a condominium complex. Instead, the companies’ president and his wife raked off more than $12 million to buy homes for themselves.

Also in May, two Maryland residents were charged with defrauding 31 immigrant investors. The pair reportedly diverted EB-5 funds intended to create jobs after Hurricane Katrina to purchase vacation and rental properties for themselves.

More enforcement powers at USCIS could have averted these and hundreds of similar scams that make the promotion of EB-5 “golden visas” to wealthy foreign nationals a mockery of U.S. citizenship.

With the EB-5 “pilot” sputtering toward its Sept. 30 expiration date and yet another pro-forma congressional renewal, Cissna said the program remains in “dire need of reforms to better protect U.S. investors, businesses and communities against fraud, abuse and mismanagement.”

“More importantly,” he added, “reforms are needed to protect against national security risks that allow foreign nationals to invest for the purpose of laundering money or conducting espionage against us.”

Congress will ignore these warnings and wield its rubberstamp at America’s peril.