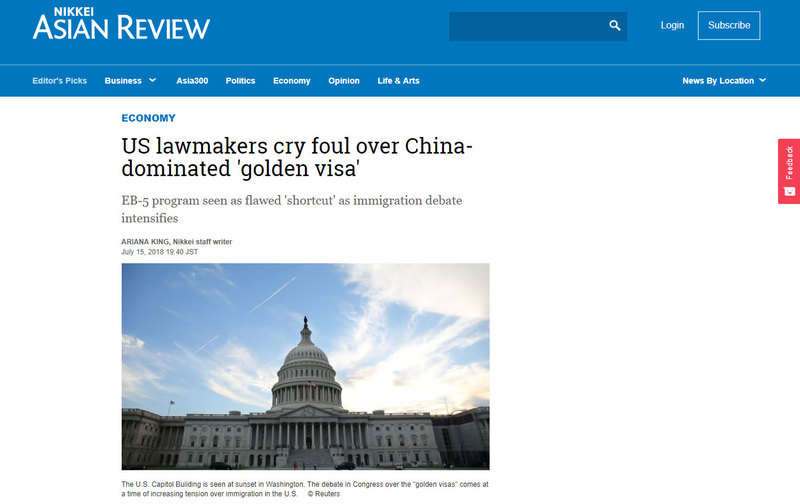 The U.S. Capitol Building is seen at sunset in Washington. The debate in Congress over the "golden visas" comes at a time of increasing tension over immigration in the U.S.

U.S. senators are pushing for tighter rules on a program that grants visas to wealthy foreign investors, a move that could shut off billions of dollars in capital flows to the country, mostly from China.

Lawmakers calling for the change say an update is long overdue for the program, which they say has failed in its goal of helping underdeveloped rural areas in the U.S., with most of the investment money going to New York.

The EB-5 Immigrant Investor Program, nicknamed the "golden visa" after the rich investors who apply for it, grants up to 10,000 U.S. green cards annually to foreign nationals who invest a minimum of $500,000 in U.S. development projects.

Although the program has brought in a sizable amount of foreign investment, critics say it allows the rich to "cut in line" on the path to citizenship at a time when the U.S. is having a tense debate on immigration reform.

"We're talking about a program that allows rich people to buy legal status in the United States with their wealth, at the same time as poor people are risking their lives and the health of their children to even apply for legal status in the United States," said Sen. Dick Durbin of Illinois, a Democrat, at a Senate Judiciary Committee hearing last month. 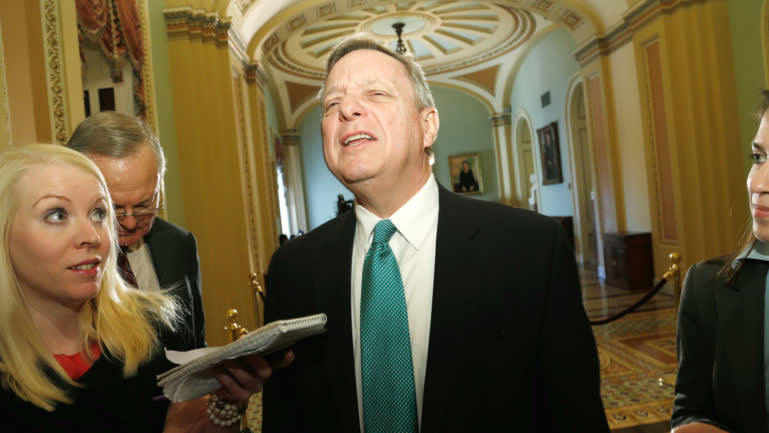 Democratic Senator Dick Durbin of Illinois is one of the strong critics of the Golden Visa program.

The Department of Homeland Security is under fire for stalling on a proposal first floated during the administration of former President Barack Obama. It would raise the minimum investment, which has not changed since the program began in 1990, to $1.8 million, and ensure that foreign money is distributed to underdeveloped rural areas.

The lack of movement on the issue since Donald Trump became president has some lawmakers frustrated.

The program made headlines last year when Nicole Meyer, sister of Trump's senior adviser and son-in-law Jared Kushner, was found to have talked up her ties to the White House to entice Chinese investors into an EB-5 real estate development project.

The EB-5 program has also been criticized for fraud.

At the Senate hearing, lawmakers brought up a January case in which more than 120 Chinese investors sued a real estate company in Idaho for allegedly swindling them out of more than $60 million. The company allegedly promised the investors that the EB-5 project entailed "zero-risk," despite the program's requirement that no financial guarantees be given to investors. 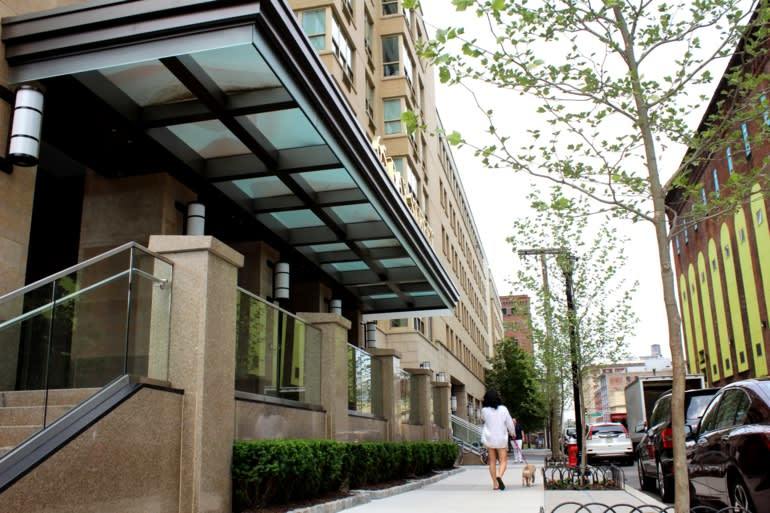 "As a result, this specific EB-5 project was terminated ... and the investors' immigration status was jeopardized, all because this project misrepresented themselves in order to gain quick, easy money," said Republican Sen. Chuck Grassley, an outspoken critic of EB-5 and co-sponsor of the Senate bill to end it.

Victims of fraud have often been Chinese. Lured by the promise of opportunities for their children, people unfamiliar with U.S. real estate regulations are led to believe that they will receive an immediate reward for their money. Migration agents -- unlicensed financial advisers who receive commissions for recruiting investors in China -- have been accused of promoting corruption by marketing projects as more attractive or less risky than they really are.

"The Chinese are a victim of the program, but they are also victims of their own countrymen," said Enrique Gonzalez, a partner at the immigration law firm Fragomen. "Some migration agents have driven investor money into some fraudulent or suspect projects based solely on who was paying the highest finder's fee."

Debate in the Senate has centered around how to bring the program back to its original purpose; to attract foreign capital to underdeveloped areas in the U.S. Lawmakers hope to see reform happen ahead of a September deadline to renew a key provision of the program.

Any reform of the EB-5 law would have a significant impact on Chinese investment. If new rules increase the minimum investment and more strictly define where the money must go, many Chinese investors would welcome the change, according to Winnie Ng, CEO of the Manhattan Regional Center, a company that specializes in channeling investment from EB-5 applicants into real estate projects.

"Changes to increase the integrity of the program have always been welcomed by investors and honest developers alike," Ng wrote in a June 21 publication of EB5 Investors magazine.

But, she noted, if such changes occur before clearing the backlog of people waiting for a visa, there will be a sharp decline in applications from China, which until recently accounted for over 70% of the visas awarded under the program.

"Chinese investors, like all other investors, want to obtain permanent residence as quickly as possible. However, things have changed and the wait now is extremely long," Gonzalez said. From 2015 to 2016, the expected time before an investor could apply for permanent residency was two years. But swelling demand has caused the waiting list to grow for Chinese nationals, due to caps on the number of green cards offered to specific countries.

Today, a Chinese investor can expect to wait up to 10 years before receiving a green card, dissuading many from applying.

"The current uncertainty of future legislation has caused many investors to postpone their decision, consider other types of visas or look at other countries as immigration options," said Ng.