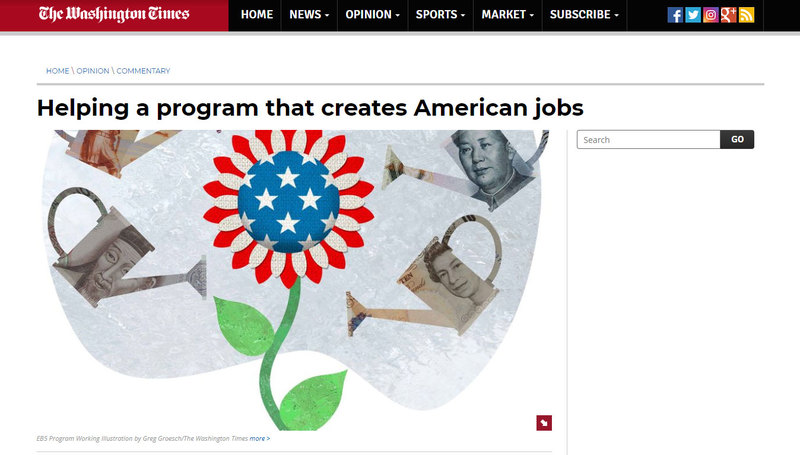 A recent Senate Judiciary Committee hearing purported to examine questions surrounding the EB-5 investor immigrant program. I say purported, because it featured only a single witness, one sympathetic to Chairman Chuck Grassley’s attacks on the program, and frequently digressed with discussion of the political topic du jour, family separations at the border.

When it stuck to the issue, what was said at the hearing left much to be desired. For instance, Mr. Grassley’s recitation of some recent abuses within the program lacked critical context. Not only are wrongdoers generally caught, but their impact pales when compared to the program’s thousands of successfully executed projects and the $20 billion in investment added it has brought the U.S. economy since 2008.

EB-5 visas are those available to immigrants who invest considerable funds in the U.S. economy, with a requirement that at least 10 jobs be created. Of political importance is the fact that EB-5 recipients don’t compete for American jobs, they create them. It’s the rare immigration program that should ruffle few, if any, feathers.

So why should the program be targeted with such tenacity? It can use some improvements, to be sure, but when even Republicans are embracing Obama-era regulations that would seriously curtail a pro-growth program, something is up.

We may have received an answer near the end of Mr. Grassley’s opening statement, where he stated his desire to “ensure capital is actually flowing to rural and underserved urban areas.”

For context, the investment threshold required to qualify for an EB-5 visa is lowered for government-designated Targeted Employment Areas, generally rural areas or those with significant levels of unemployment. What has the chairman, who represents Iowa, so agitated is his view that these attempts at government controls are not directing the market as thoroughly as politicians would like. That’s the thing about markets. They care more about efficiency than political expediency.

Ideally, investment should flow to where it provides the most value, and that’s best determined by markets, not politicians. Unfortunately, political necessity sometimes requires deal-making and compromises. The failure of this approach to direct sufficient funds away from their best economic use toward the projects preferred by politicians is not a good reason to scuttle the entire program, as would be done by a bill that Mr. Grassley introduced after his desired reforms were not adopted.

There are legitimate improvements that would benefit the EB-5 program. For instance, the processing of EB-5 applications takes much longer than advertised. Jacqueline Varas of American Action Forum also recommended more reliable and precise data collection, and to make it publicly available.

Another improvement to the program not discussed at the hearing involves the counting of family members against the 10,000 yearly EB-5 cap. There’s a huge backlog of EB-5 applicants, individuals eager to bring investment into the United States, that wouldn’t exist if Congress had been properly adhering to the law. That’s because as the Cato Institute’s David Bier recently uncovered, there is strong “evidence that proves that members of Congress believed that spouses and children wouldn’t count against the cap.” But that’s not how it’s been administered to date.

Opponents of EB-5 visas are also missing the big picture. Sen. Dianne Feinstein, who joined with Mr. Grassley to introduce the legislation to terminate the program, criticized it as meaning that “U.S. citizenship is for sale.” But a sale implies the proceeds are going to the seller, in this case the government. Instead, EB-5 is about attracting the most successful to America. The alternative is that they take their investment capital and experience to any of the numerous other jurisdictions competing for these immigrants with similar programs.