Kushner’s Firm Deepens Ties to Those With Business in Washington 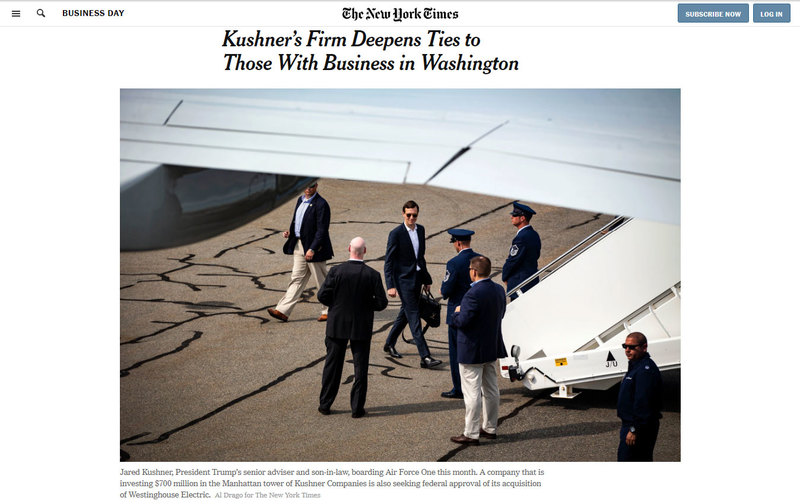 Jared Kushner, President Trump’s senior adviser and son-in-law, boarding Air Force One this month. A company that is investing $700 million in the Manhattan tower of Kushner Companies is also seeking federal approval of its acquisition of Westinghouse Electric.

Eighteen months into Jared Kushner’s White House tenure, his family’s real estate firm is deepening its financial relationships with institutions and individuals that have a lot riding on decisions made by the federal government.

In the latest example, an arm of Brookfield Asset Management is close to completing an investment of up to $700 million in the Kushner family’s tower at 666 Fifth Avenue in Manhattan. The deal will be a boon to the Kushners, who are struggling to recoup their investments in their flagship building.

At the same time, another Brookfield unit is awaiting the Trump administration’s approval of its acquisition of the nuclear-power company Westinghouse Electric. The deal is being reviewed by the Committee on Foreign Investment in the United States, made up of senior federal officials who consider the potential national security risks of transactions involving foreign companies. Brookfield’s headquarters are in Canada.

Mr. Kushner, who is President Trump’s son-in-law and senior adviser, has broad portfolios of both White House responsibilities and personal business interests — a combination that experts say has the potential to create real and perceived conflicts between his public and private roles.

“Jared knows who is invested with the family business. He can’t unlearn that,” said Don Fox, acting director of the Office of Government Ethics under President Barack Obama and an official in both Republican and Democratic administrations. “There is absolutely potential for him to be influenced if he has to make a decision or provide advice to cabinet officials that could affect his investors. And that can’t be lost on the people that are investing with him.”

The family’s business, Kushner Companies, declined to comment. Peter Mirijanian, a spokesman for Mr. Kushner’s lawyer, said Mr. Kushner had followed the advice of ethics lawyers concerning the sale of certain assets and “is not in any position to comment on business decisions made by others at his former companies since he left.” Representatives of the White House did not respond to requests for comment.

Loans totaling $1.4 billion on the Kushner tower, at 666 Fifth Ave., are due in February.

A Brookfield spokeswoman, Suzanne Fleming, said there was no connection between the 666 Fifth Avenue deal and Brookfield’s plans to acquire Westinghouse. Another Brookfield representative, Andrew Brent, said the company had met with Mr. Kushner in the past, but not since he joined the Trump administration.

Kushner Companies has also recently negotiated a number of previously undisclosed transactions with investors who have business in Washington. Those investors include a businessman who arranges United States visas in exchange for real estate investments from overseas. His company is leading the lobbying fight against proposals to change the federal program on which his business relies.

Last month, Mr. Kushner reported in a federal ethics filing that he owns hundreds of companies and other entities that hold as much as $811 million in assets. They generated as much as $222 million of income for him last year, an extraordinary level of business activity for a top White House aide.

The 98-page annual filing isn’t required to and didn’t disclose the identities of his family company’s growing network of partners and lenders.

Mr. Kushner’s White House portfolio ranges from shaping Middle East strategy to overhauling the government’s technology and overseeing investment in infrastructure. Those responsibilities at times have overlapped with his family business dealings.

In February, The New York Times reported that Mr. Kushner had met privately at the White House with executives from the private equity firm Apollo and the investment bank Citigroup, even as the companies were contemplating loans to Kushner Companies. In a previously undisclosed development, Citigroup is authorizing another loan to his firm, $480 million for a project in Brooklyn, according to a letter sent by the bank to Senator Elizabeth Warren, Democrat of Massachusetts. In the letter, Citigroup said Mr. Kushner had no role in initiating or negotiating the loan. 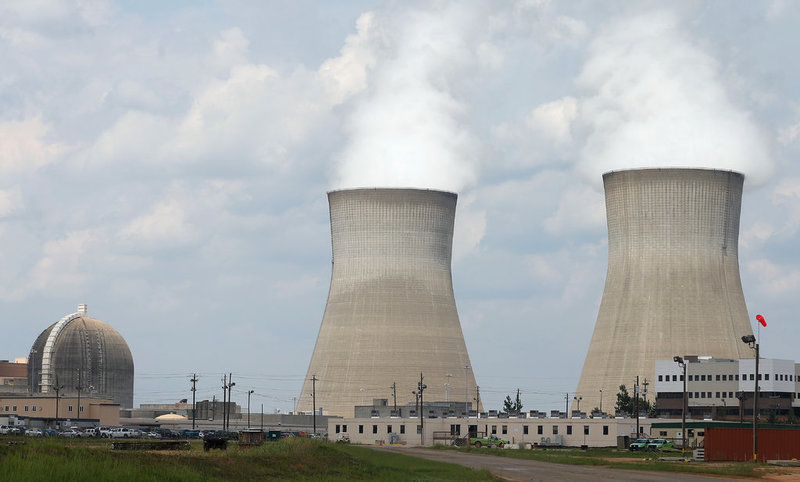 A Westinghouse-designed nuclear power plant being built in Waynesboro, Ga., in 2014. Brookfield Asset Management’s purchase of Westinghouse is under review by the Committee on Foreign Investment in the United States.

Although Mr. Kushner resigned as chief executive of Kushner Companies last year and sold portions to a trust controlled by his mother, he retained most of his stake in the business. During 2017, his family’s company bought and sold properties worth between $22 million and $102 million using entities in which Mr. Kushner remained invested, filings show.

One of those deals involved the refinancing of apartment buildings that Kushner Companies owns in Baltimore and its suburbs. As part of last year’s refinancing, the firm took on some new backers, whose identities Kushner Companies hasn’t disclosed. One of them was Nicholas Mastroianni II, who invested roughly $4 million, he said in an interview. He is the founder and chief executive of a company called U.S. Immigration Fund.

U.S. Immigration Fund has much at stake in Washington. Its business revolves around raising money from foreign investors through a controversial government-sanctioned program called EB-5, which offers United States visas in exchange for real estate investments of at least $500,000.

Since 2015, U.S. Immigration Fund has spent $1.4 million lobbying against changes to the EB-5 program, which was intended to finance development in poor neighborhoods but has morphed into a source of cheap financing for luxury real estate projects.

Kushner Companies has been one of U.S. Immigration Fund’s big clients, helping the Kushners raise money from Chinese investors.

Last year, Mr. Kushner’s sister Nicole Kushner Meyer sparked an outcry when she traveled to China to find investors — in a trip arranged by U.S. Immigration Fund — and trumpeted her family connections. 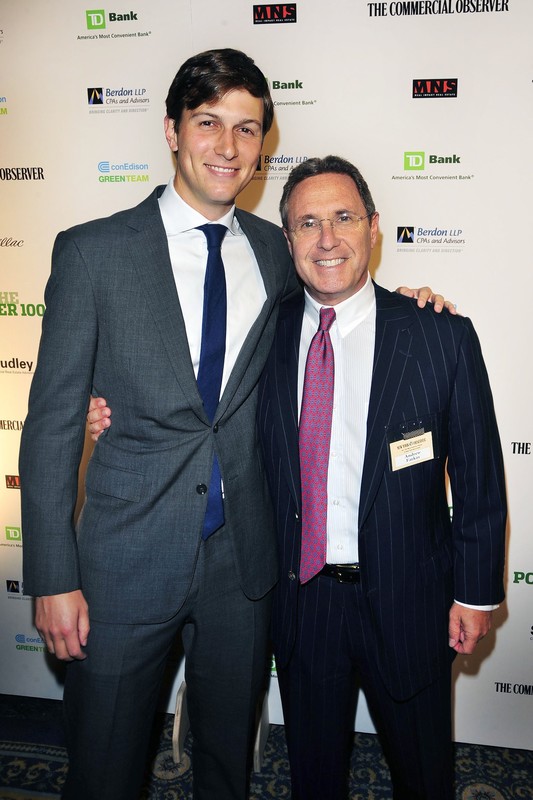 Mr. Kushner in 2011 with Andrew Farkas, whose company backed the Kushner Companies’ purchase of two apartment buildings in Hackensack, N.J., for about $102 million this year.

The United States attorney’s office in Brooklyn opened an investigation, and Kushner Companies said it would no longer seek EB-5 funding for the project. Mr. Kushner’s father, Charles, said in an interview published last month that he had been informed that the investigation into Kushner Companies was closed. A spokesman for the Brooklyn prosecutor’s office declined to comment.

Last month, Senator Charles E. Grassley, a Republican from Iowa, wrote to Mr. Trump urging the Department of Homeland Security to finish regulations that would make it harder for real estate developers to use the program to fund projects in wealthy areas.

“Certain EB-5 interest groups are telling investors they have ‘bought off the White House’ and that your administration will never allow the EB-5 regulations to take effect,” Mr. Grassley wrote. “These comments are very disturbing.”

Mr. Mastroianni described his investment in the Kushners’ buildings as “just an opportunity that was brought to us.” He said the investment had no connection to the EB-5 work the firm had done for Kushner Companies. He added: “We are along for the ride.”

Kushner Companies has continued to do deals in 2018. In March, it bought a pair of apartment buildings in Hackensack, N.J., for about $102 million, with financial backing from a firm run by Andrew Farkas, according to a previously unreported securities filing.

While Mr. Farkas hasn’t been vocal in seeking to influence federal policymaking, he has repeatedly worked with a prominent businessman from the United Arab Emirates, where Mr. Kushner is a point person for American foreign policy. 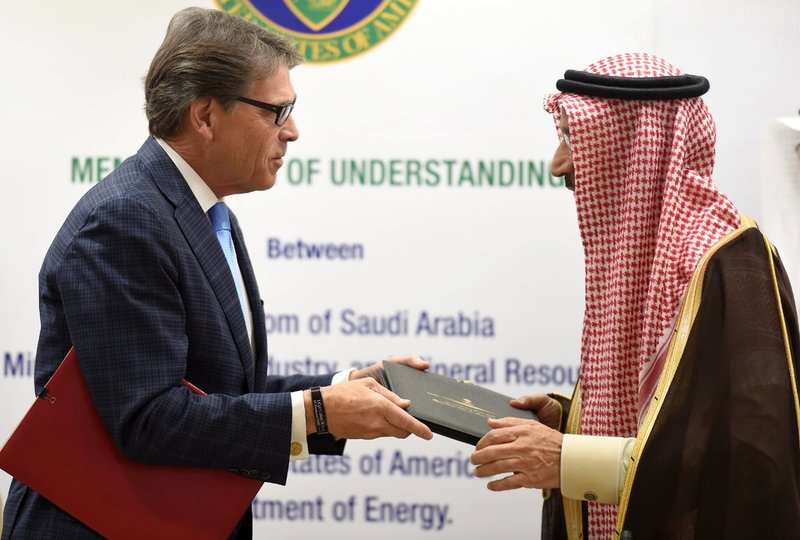 The most important deal for the Kushner family this year is Brookfield’s investment in 666 Fifth Avenue.

Jared and Charles Kushner bought the building near the peak of the real estate market in 2007. Loans totaling $1.4 billion on the building are due in February, and the entire property is worth less than $1 billion by some estimates. (Jared Kushner sold his stake in the building to the trust controlled by his mother.)

For two years, the Kushners have been trying to find someone to salvage their investment. Those efforts repeatedly failed. The company had conversations about a possible bailout with China’s Anbang Insurance Group — with close ties to the Chinese government — and current and former government officials from Qatar.

The deal with Brookfield’s property arm, which is partly owned by the Qatari government, was tentatively reached this spring, a few months after Brookfield announced its $4.6 billion purchase of Westinghouse.

Because Brookfield is a foreign company and Westinghouse operates in the nuclear industry, the acquisition is subject to review by the Committee on Foreign Investment in the United States, known as Cfius. The committee is made up of senior members of at least nine United States government agencies, including the State and Treasury Departments.

Over the years, the body has forced many foreign companies to drop or change their proposed deals in the United States.

Westinghouse’s chief executive said recently that he expected Cfius and other regulatory bodies to approve the Brookfield deal “in the next few weeks.”