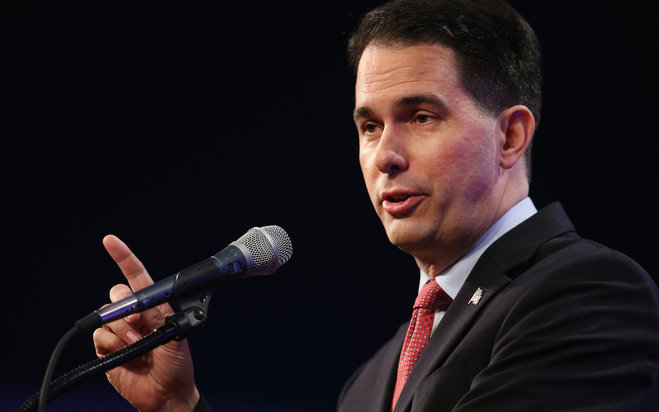 Gov. Scott Walker has been trying to turn himself into an anti-immigration crusader as he gears up to run for president in 2016.

But there's one federal visa program you won't hear him attack. It's the controversial and deeply troubled immigrant investor program.

The program — known as EB-5 — puts wealthy foreigners on the path to U.S. citizenship if they invest at least $500,000 in an American commercial project that will create or preserve 10 jobs.

Critics have called the abuse-riddled program a "scam" that essentially sells green cards to the affluent and their families, with more than 80% of those in the program coming from China.

But Walker has long been a champion of EB-5 visas, which grant permanent U.S. residence.

You can find Walker prominently featured on the website of FirstPathway Partners, a Milwaukee firm that helps foreigners find local development projects in which they can park their half-million dollars.

Walker was the featured speaker at events for several Milwaukee-area projects involving the company, including the opening of the Global Water Center and the downtownMilwaukee Marriott. In addition, FirstPathways sponsored the Republican governor's reception in Shanghai during his 2013 trade trip to China, describing it as a "historic moment" for the firm and the state.

"Scott Walker has been a long-time friend of FirstPathway Partners, and we are pleased to have his support for our program," says the website.

Not surprisingly, the head of FirstPathway is also a friend of Team Walker.

Campaign records show Robert W. Kraft, chairman and CEO of FirstPathway, and his wife have donated $21,250 to Walker's campaign and that of Lt. Gov. Rebecca Kleefischin recent years. Kraft did not return calls last week.

What's more, the Metropolitan Milwaukee Association of Commerce heads up the seven-county EB-5 regional center, which sponsors and vets investment projects funded with these foreign dollars in southeast Wisconsin.

Since 2010, MMAC has poured more than $1.8 million into two nonprofits — the Republican Governors Association and Wisconsin Club for Growth — that have spent big to help Walker win three times statewide over the past five years.

David North, a fellow with the conservative Center for Immigration Studies, said it's not unusual for there to be financial links between local politicians and those benefiting from or directing the EB-5 regional centers.

The program has support from pols in both parties, including Democrats from President Barack Obama to Milwaukee Mayor Tom Barrett. Kraft has given $1,400 to Barrett since 2010.

"That's the way it works around the country," North said.

But North said Walker has to take a serious look at eliminating the foreign investor program because it has shown itself to be subject to widespread abuse, citing criminal probes and scrutiny in Chicago, New Orleans, California, Texas and South Dakota. A 2013 federal inspector general's report found that program administrators were "unable to demonstrate the benefits of foreign investment into the U.S. economy."

Beyond that, North said, the program is flawed in its premise.

"I think it's immoral, fattening and otherwise unattractive to sell visas, which is what we're doing now," North said.

But Walker declined to address questions about his support for the EB-5 program or his financial connections to FirstPathway.

In response to a series of questions, a spokeswoman for Our American Revival — the nonprofit promoting Walker's presidential prospects — put out this statement:

"The Governor is a proponent of immigration that is supportive of the nation's economic needs, our working families, and wages. But the system is broken and we need to review the current immigration system to ensure we are achieving those goals."

Congress created the EB-5 program in 1990, years before China emerged as a global economic power, and the program remained all-but-dormant for years.

But with the recession, American developers found it more difficult to finance their projects through banks and other traditional lenders. The ready and cheap alternative source of financing often proved to be foreigners, especially the newly wealthy Chinese, seeking U.S. residency for themselves or their families.

Under the Citizenship and Immigration Services' Immigrant Investor Program, foreigners can obtain these visas by investing $500,000 in high unemployment areas — or $1 million elsewhere — in projects generating or saving 10 jobs over two years.

According to TheNew York Times, the federal government puts the green card applications from these foreign investors on the fast track. In general, it takes about two years to obtain legal residency through the program; other visa programs take much longer.

The Office of Inspector General for the U.S. Department of Homeland Security issued a scathing critique of the program in December 2013. Among other things, the inspector general found that the federal government didn't have the power to shut down regional centers because of fraud or national security concerns.

"USCIS has difficulty ensuring the integrity of the Employment-Based Fifth Preference regional center program," it concluded.

In March, the same office found that the program's former director may have acted inappropriately in his agency's handling of three matters, leading staffers "to reasonably believe that specific individuals or groups were being given special access or consideration in the EB-5 program."

"It's the worst combination of bad economics, political cronyism, and unfairness — and it has been endorsed by saints of capitalism Warren Buffett and Bill Gates," Posner wrote for Slate.

"Among other things, it's almost impossible to figure out whether a specific investment generates jobs rather than reshuffles them from one place to another. There have also been examples of outright fraud and political cronyism."

MMAC President Tim Sheehy is aware of the criticisms.

But Sheehy said the visa program has operated differently here.

Instead of having developers running the regional center, Milwaukee's chamber of commerce sought federal approval for the local agency, and it continues to vet the projects receiving money from the foreign investors.

"We can and we have turned down projects before," Sheehy said, noting that federal officials must OK the list of foreigners underwriting the deals.

Sheehy said his interest is in attracting capital that can be used to create jobs. As a result of the visa program, some 500 foreigner investors have pumped more than $260 million into Milwaukee-area ventures, including the Aloft and Kimpton hotels downtown.

The investors, for their part, are willing to put money into a higher risk investment with a lower return in the hopes of securing a green card.

These foreigners are not required to move to the area where they are putting their money, Sheehy said, but some invest in Wisconsin because they hope to get their children into the University of Wisconsin campuses.

FirstPathway is the most prominent local developer using EB-5 money for Milwaukee projects, Sheehy said, but there are many others doing the same but with a lower profile.

"When you go to China and you're trying to entice a Chinese investor here to the U.S., what they want to see is credibility," Sheehy said. "They're using the image of the governor (on their website) to convince other people that they are legitimate."

So it's proved a reliable source of cheap financing for Milwaukee projects. But does the program represent a good way of distributing visas to those seeking U.S. residency?

Sheehy wouldn't take a position on that. His group, he said, didn't seek to set up the regional center "as an immigration tool."

"Capital development for us, and not really thinking this as a statement on immigration, one way or the other," Sheehy said in summary of the EB-5 program.

The bigger immigration questions will be left, instead, to those such as Walker who are running for president.